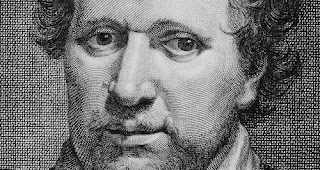 Limping here, of late. Reading’s haywire, inconsistent, dilatory, blocked. (I think of William Drummond of Hawthornden’s line concerning Ben Jonson: “he heth consumed a whole night in lying looking to his great toe, about which he hath seen tartars & turks Romans and Carthaginians feight in his imagination.”) Odd irregular forays into stumped “inconcludency” (make it klutzy). Sense of blockage, the brain-bolts torqued to maximum tension. Hence the rare noisy gabble and outpouring of words unsummoned, “misknowen” phrases like little intercom stomp or a satrap’s piastre or plangency’s rebarb . . . Cottonings to surd musickings, wild keeps. (Drummond, of Jonson: “That he stroke at Sr Hierosme Bowes Breast, and asked him, if he was within.”)

Clark Coolidge, out of Mine: The One That Enters the Stories (1982):

He had thought that only if the door could be sprung the knowledge would be gained, not knowing that it was exactly the standing of that door was the point. The door that is never to be opened enters the mind.

I’ve arrived at the want of nothing further, so await the stopping of even my waiting and holding further. These paragraphs stay the hopelessness of blocks. The door holds the skin from its innards. This is the history of its errors. But the story you wish already is in its cells. An unraveling of the body in the twentieth century, a quitclaim descendant of continuance ridge. A bee’s eye view of Emily Dickinson as she puts away always her things in drawers. The writing will be snubbed, however dangled, we know this from the start, any flinging down an avenue of dwindled but speeding starts.

I want to tell the story that holds in wait. I am held by the hand that in never quite touching the handle reminds us of how many times that door has been opened, so many times we have forgotten what lies within, so fixed are we by that opening and shutting the contents of our very memories have become a mystery.

Reverbs off Coolidge’s doors. Being exit and entrance. Threshold’s equilibrium. Liminal mischief. The writing scooping the writ. (Coolidge, in “A Note on Bop” (Now It’s Jazz: Writings on Kerouac & The Sounds) refers to “the famous door of Elvin Jones”—the drummer’s limbo and warranty: “The length of my solos doesn’t mean anything. When I go on for so long, I am looking for the right way to get out. Sometimes the door goes right by and I don’t see it, so I have to wait until it comes around again. Sometimes it doesn’t come around at all for a long, long time.”) Pertinent, too, lines out of Coolidge’s Code of Signals entry, “Notebooks (1976-1982)”:

I am jealous of my own doubt.
To say no to everything, what a wonder!
To set in motion, contains its own stopping
point. I glare in at myself to start it all
turning again. I have often opened my doors
to find the small flame of my doubt my only
light. Sometimes I shelter it with the mass
of all my works. I cup it with my acceptance,
blow upon it with satisfaction. I am vitalized
by all it has killed.

Keeping doubt—“haywire, inconsistent, dilatory, blocked” doubt—vigorous. (“Exactly the standing of that door was the point.”) Refusal of finish, refusal to finish. Drummond, of Jonson: “he read his translation . . . of ane Epigrame of Petronius / Fœda et brevis est Veneris Voluptas / Concluding it was better to lie still and Kisse then pante . . .”) Jonson’s “Fragment of Petron. Arbiter Translated”:

Doing, a filthy pleasure is, and short;
And done, we straight repent us of the sport:
Let us not then rush blindly on unto it,
Like lustful beasts that only know to do it:
For lust will languish, and that heat decay.
But thus, thus, keeping endless holiday,
Let us together closely lie and kiss,
There is no labour, nor no shame in this;
This hath pleased, doth please, and long will please; never
Can this decay, but is beginning ever.

A kind of poetics there: Coolidgean, “thus, thus,” “beginning ever.” “The story that holds in wait.”

To note: three new pieces—“Pound and Cudgel,” “Uncanny and Fit,” and “Grief and Slough”—now up at Andrew Spragg’s Infinite Editions.
Posted by John Latta at 6:48 AM