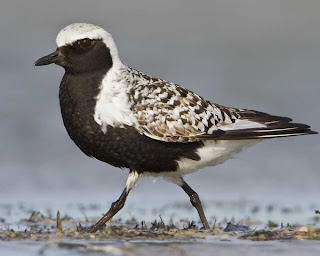 Off yesterday to Magee Marsh in Ohio, a patch of marshland along Lake Erie good for birding. Twenty or so different species of warblers. Somewhat fewer shorebirds, with good looks at some black-bellied plovers and a wheeling sharp-winged dynamo of a flock of dunlins. The rusty identificatory eye—the need to recall the pertinent field marks each yearly outing. The Peterson’s guide—the unrevised one (c. 1947), with outdated nomenclature (“myrtle warbler” versus the newer “yellow-rumped”—why change the names of things?)—tucked under my belt. How I thrilled—aged thirteen or so—to Roger Tory Peterson’s slightly fusty (“This lad had a book”) remarks in the preface to the famous Guide (lacking in the newer editions):

Those of us who have read Ernest Thompson Seton’s semi-autobiographical story, Two Little Savages, remember how the young hero, Yan, discovered some mounted ducks in a dusty showcase and how he painstakingly made sketches of their patterns.
This lad had a book which showed him how to tell ducks when they were in the hand, but since he only saw the live ducks at a distance, he was usually at a loss for their names. He noticed that all the ducks in the showcase were different—all had blotches or streaks that were their labels or identification tags. He decided that if he could put their labels or ‘uniforms’ down on paper, he would know these same ducks as soon as he saw them at a distance on the water.
Many of us, later on, when the sport of bird-study first revealed its pleasurable possibilities, tried to locate a book—a guide—that would treat all birds in the manner that Yan and the ducks had suggested. We found many bird books, but although descriptions were complete and illustrations authoritative, the one thing we wished for—a ‘boiling down,’ or simplification of things so that any bird could be readily and surely told from all the others at a glance or at a distance—that, except fragmentarily, we were unable to find.
We would study a colored plate of Warblers, thorough in its treatment of dull-colored juveniles and autumn plumages, but confusing in the similarity of them all. We would select some point on each bird as being perhaps the diagnostic feature, though we could not be certain. Fancied differences were noted, while the really distinctive characteristics were overlooked. This shadow of uncertainty that darkened many of our earlier finds of ‘rare’ birds marred our enjoyment of the study.

“Hence,” Peterson concludes, “this handbook—designed to complement the standard ornithological works, a guide to the field marks of Eastern birds . . .” Admittedly, the Earnest Thompson Seton books I subsequently sought out thrilled me little. Here’s the opening of the Two Little Savages (1903) chapter, “How Yan Knew the Ducks Afar,” with its talk of sketching, putting “uniforms down on paper”:

One day as the great Woodpecker lay on his back in the shade he said in a tone of lofty command:
“Little Beaver, I want to be amused. Come hyar. Tell me a story.”
“How would you like a lesson in Tutnee?” was the Second Chief’s reply, but he had tried this before, and he found neither Sam nor Guy inclined to take any interest in the very dead language.
“Tell me a story, I said,” was the savage answer of the scowling and ferocious Woodpecker.
“All right,” said Little Beaver. “I’ll tell you a story of such a fine boy—oh, he was the noblest little hero that ever wore pantaloons or got spanked in school. Well, this boy went to live in the woods, and he wanted to get acquainted with all the living wild things. He found lots of difficulties and no one to help him, but he kept on and on—oh! he was so noble and brave—and made notes, and when he learned anything new he froze on to it like grim death. By and by he got a book that was some help, but not much. It told about some of the birds as if you had them in your hand. But this heroic youth only saw them at a distance and he was stuck. One day he saw a wild Duck on a pond so far away he could only see some spots of colour, but he made a sketch of it, and later he found out from that rough sketch that it was a Whistler, and then this wonderful boy had an idea. All the Ducks are different; all have little blots and streaks that are their labels, or like the uniforms of soldiers. ‘Now, if I can put their uniforms down on paper I’ll know the Ducks as soon as I see them on a pond a long way off.’ So he set to work and drew what he could find. One of his friends had a stuffed Wood-duck, so the ‘Boy-that-wanted-to-know’ drew that from a long way off. He got another from an engraving and two more from the window of a taxidermist shop. But he knew perfectly well that there are twenty or thirty different kinds of Ducks, for he often saw others at a distance and made far-sketches, hoping some day he’d find out what they were. Well, one day the ‘Boy-that-wanted-to-know’ sketched a new Duck on a pond, and he saw it again and again, but couldn’t find out what it was, and there was his b-e-a-u-t-i-f-u-l sketch, but no one to tell him its name, so when he saw that he just had to go into the teepee and steal the First War Chief’s last apple and eat it to hide his emotion.”
Here Yan produced an apple and began to eat it with an air of sadness . . .

The original edition of Seton’s Two Little Savages—subtitled Being the Adventures of Two Boys who Lived as Indians and What They Learned—here containing a plate of drawings comparing various ducks (“Far-sketches showing common Ducks as seen on the water at about 50 yards distance. The pair is shown in each square, the male above . . .”—a kind of proto-Peterson arrangement), each with a short list of references to the “blots and streaks that are their labels” (“Black Duck or Dusky Duck (Anas obscura). Dark bill, red feet, no white except in flight, then shows white lining of wings.”) Fons et origo of Peterson’s method.

Proust put on and took off that black beard of a caliph as fast as the comedians who, in the provinces, imitate statesmen and orchestra leaders. I remember him with a beard, and I have seen him clean shaven as he appears in the painting of Jacques-Emile Blanche, an orchid in his buttonhole and his face looking like an egg.
Proust used to receive me in that closed room. He would be on his bed, dressed, wearing a collar, a necktie, and gloves, in fearful terror of a perfume, a breath of air, an opened window, a ray of sun. “Dear Jean,” he would ask me, “didn’t you hold the hand of a lady who might have touched a rose?” “No, Marcel.” “Are you sure?” And half serious, half joking, he would explain that the phrase from Pelléas where the wind passes over the sea was enough to start up in him an attack of asthma.
He lay stiffly across the bed in the wrong way, in a sarcophagus of remains of souls and landscapes and all that had not served him in Balbec, Combray, Méséglise, in the Countess de Chevigné, in Count Greffhule, in Haas and Robert de Montesquiou. He lay just as he did when we looked at his remains for the last time beside the pile of notebooks of his novel which continued to live at his left, like the wristwatches on dead soldiers.
Each night he read to me from Swann’s Way.

Another of Guillaume Apollinaire:

I knew him when he wore a pale-blue uniform, when his head was shaved and a scar on his forehead resembled a starfish. A device of leather and strips of cloth made for him a kind of turban or small helmet, which seemed to be concealing a microphone through which he heard what the rest of us could not hear and by which he kept in secret contact with a magic world. He transcribed its messages. Some of his poems do not even translate the code. We often saw him listen. He closed his eyes, hummed, dipped his pen in the inkwell. A drop of ink formed at the tip. It wavered and fell. It made a star on the paper. Alcools and Calligrammes were markings of a secret code . . .
The unusual word (and he used many) lost, in Apollinaire’s art, all picturesqueness. The banal word became rare. The amethysts, moonstones, emeralds, carnelians, and agates in his poetry, he mounted, no matter where they came from, as a winnower winnows, seated on a café chair. No street artisan was more humble and more alert than this soldier in blue.
He was large without being fat, his Roman face was pale, his mouth with a small mustache over it articulated words in a staccato voice, with a slightly pedantic and panting grace.
His eyes laughed at the seriousness of his face. His hands of a priest accompanied his speech with gestures which recalled the gesture sailors affect when they drink and when they urinate.
His laughter did not come from his mouth. It rose up from every part of his organism, like an invasion him. Then followed a silent laughter in his eyes, and his body resumed its balance. Wearing socks, without his leather leggings, his knee breeches tight over his legs, he crossed his small bedroom on the Boulevard Saint-Germain, climbed a few steps to the tiny study where we saw the de luxe edition of Serres Chaudes and the copper bird of the Beni . . . 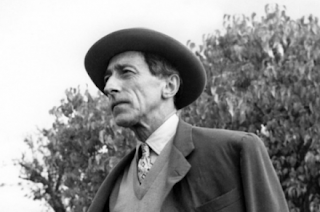