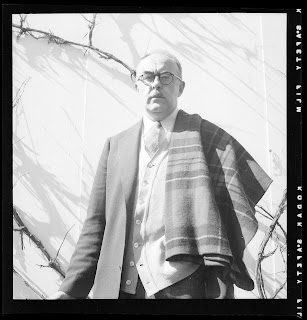 Morning’s field planked with “losenges and scochouns” of fog, heraldic shreds of the night. Night of rain’s fierce throttlings and tender abeyances, a low pressure trough making its way east. “Blowing like a leaf in green shadow.” Literature, its way of subjoining the blunt realia of the moment. To record the opening lines out of Denise Riley’s piece “Lyric” (out of Selected Poems):

then it can call out high
and rounded as a night-
bird’s cry falling clean
down out of a black tree.

I take on its rage at the cost
of sleep. If I love it I sink
attracting its hatred. If I
don’t love it I steal its music.

Is it merely the result of readerly propinquity—my opening up William Gaddis’s Carpenter’s Gothic (1985) “in the vicinity” of Riley’s “Lyric”?—why need I juxtapose Gaddis’s ambiguous and brutal opening lines here?

The bird, a pigeon was it? or a dove (she’d found there were doves here) flew through the air, its colour lost in what light remained. It might have been the wad of rag she’d taken it for at first glance, flung at the smallest of boys out there wiping mud from his cheek where it hit him, catching it up by a wing to fling it back where one of them now with a broken branch for a bat hit it high over a bough caught and flung back and hit again into a swirl of leaves, into a puddle from rain the night before, a kind of battered shuttlecock moulting in a flurry at each blow, hit into the yellow dead end sign on the corner opposite the house where they’d end up that time of day . . .

Violence and uncertainty, and the tenuousness of its music allowing a kind of vitality, unkempt, vacillatory, brimming with unreconciled energies, “lyric.”

He would be a poet who could impress the winds and streams into his service, to speak for him; who nailed words to their primitive senses, as farmers drive down stakes in the spring, which the frost has heaved; who derived his words as often as he used them—transplanted them to his page with earth adhering to their roots; whose words were so true and fresh and natural that they would appear to expand like the buds at the approach of spring, though they lay half smothered between two musty leaves in a library—

And somewhat idly wondering if Charles Olson—who talks little of Thoreau—recalled Thoreau’s “words . . . with earth adhering to their roots” in summoning up “These Days”:

In a 21 January 1954 letter to Irving Layton, Olson writes of sending the lines to William Carlos Williams:

Oh, YEAH; as of the shit in Bill’s pants, or EP’s—how you had it—messiness; I once sent this one, to Bill:

whatever you have to say,
leave the roots on. Let them dangle.
And the dirt.

Just to make sure
where they come from

I think it was. It’s the idea,
anyway