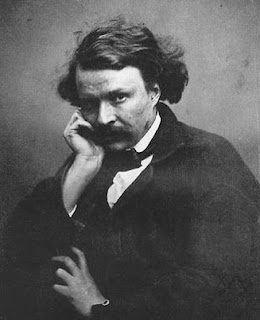 Night showers linger into morning and the rain knocks down the rosy petals of the crabapple trees, staining the streets. Appropriating the rightness of the random turn of the page. Zukofsky, out of Bottom: On Shakespeare (1963), quoting some lines of “D’Albert, a poet,” out of Théophile Gautier’s Mademoiselle de Maupin (1835):

‘I cannot check my brain, which is all the difference between a man of talent and a man of genius . . . When I write a phrase, the thought which it represents is already as far distant from me as though a century had elapsed instead of a second, and it often happens that in spite of myself I mingle with it something of the thought which has taken its place in my head . . . To come upon a thought in a vein of your brain, to take it out rude at first like a block of marble as it is got from the quarry, to set it before you and, with a chisel in one hand and a hammer in the other, to knock, cut, and scrape from morning till evening, and then carry off at night a pinch of dust to throw upon your writing—that is what I shall never be able to do. . . .’

(I think of Charles Olson’s 1950 “Projective Verse” essay, with its fierce exigency that a poem “be a high-energy construct”: “ONE PERCEPTION MUST IMMEDIATELY AND DIRECTLY LEAD TO A FURTHER PERCEPTION. . . . keep it moving . . . one perception must must must MOVE, INSTANTER, ON ANOTHER!”) Some of what Zukofsky cut out of the Gautier:

‘I cannot check my brain, which is all the difference between a man of talent and a man of genius; it is an endless boiling, wave urging wave; I cannot master this species of internal jet which rises from my heart to my head, and, for want of outlets, drowns all my thoughts. I can produce nothing, owing not to sterility, but to superabundance; my ideas spring up so thickset and close that they are stifled and cannot ripen. Never will execution, however rapid and impetuous it may be, attain to such velocity. When I write a phrase . . .

That “wave urging wave” seemingly akin to Zukofsky’s “Leaf around leaf” or “leaf on leaf” in “A” (“Leaf around leaf ranged around the center . . . / The leaves never topple from each other, / Each leaf a buttress flung for the other”), a formula surely mimicking Pound’s repeated “ply over ply” in the The Cantos.

Oddly enough—thinking of Zukofsky’s compounding of sight and music (“The music brings up a vacuum thru which light / travels . . .”)—Pound, too, uses the line to trace both phenomena of sight—

Ply over ply, thin glitter of water;
Brook film bearing white petals.
The pine at Takasago
grows with the pine of Isé!
The water whirls up the bright pale sand in the spring’s mouth
“Behold the Tree of the Visages!”
Forked branch-tips, flaming as if with lotus.
Ply over ply
The shallow eddying fluid,
beneath the knees of the gods.

Filled our tanks, sailed 5 days along shore
Came then West Horn, the island that closes its harbor
And by day we saw only forest,
by night their fires
With sound of pipe against pipe
The sound ply over ply; cymbal beat against cymbal,
The drum, wood, leather, beat, beat noise to make terror.

Some of Zukofsky’s uses of the repeated “leaf” in “A”:

He who creates
Is a mode of these inertial systems—
The flower—leaf around leaf wrapped
around the center leaf . . .

. . . we talk, leaf
After leaf of your mind’s music, page, walk leaf
Over leaf of his thought, sounding
His happiness: song sounding
The grace that come from knowing
Things . . .

And, out of Zukofsky’s resounding, contrapuntal, and ludic lines (originally in the 1931 Objectivists number of Poetry under the title “‘A’: Seventh Movement: ‘There are different techniques’”):

But they had no eyes, and their legs were wood!
But their stomachs were logs with print on them!
Blood-red, red lamps hung from necks or where could
Be necks, two legs stood A, four together M—
They had no manes so there were no airs, but—
Butt . . . butt . . . from me to pit no singing gut!

Says you! Then I, Singing, It is not the sea
But what floats over: hang from necks or where could
Be necks, blood-red, red lamps (Night), Launder me,
Mary! Sea of horses that once were wood,
Green and, and leaf on leaf, and dancing bucks,
Who take liveforever! Taken a pump
And shaped a flower . . .

Extravagaria of the sawhorses in the street. Out of Bottom: On Shakespeare, Zukofsky’s quoting out of Gautier’s Mademoiselle de Maupin: “‘I have a perfect comprehension of the unintelligible; the most extravagant notions seem quite natural to me: I can find with ease the connection of the most capricious and disordered nightmare.’” (Cut without ellipsis by Zukofsky. In lieu of the colon, read: “and I enter into them with singular facility.”)
Posted by John Latta at 7:43 AM