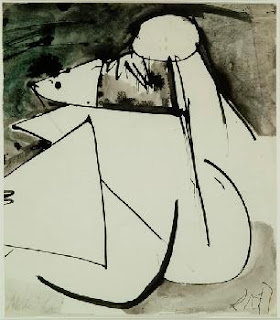 May morning’s continual whomp of nostalgia and loss, its new greens running the gamut to yellow, its tiny acrobats in the treetops. Apt, thus, again, to offer up a jumble, pre-conceptual, disordered, flung. Renegade japery in human tatters. A field report. (Jack Kerouac, out of Maggie Cassidy: “I was going to grow up to walk in sleet in fields; didn’t know it then.”) Stuck without a salient to go to the end of, I walk it off, dislodging a few words at each reentry.

That itch to fill any blank with the poke of a digit, the human finger pointing “off” in tender mockery of the fervency of its own self-apprehending. The way the way is unplugged by sparring, by scrimmage. Nothing’s own prehensile certainty found in excavating the pit, the empty pit. John Ashbery, out of “The System” (c. 1971):

. . . just, I say, as we begin each day in this state of threatened blankness which is wiped away so soon, but which leaves certain illegible traces, like chalk dust on a blackboard after it has been erased, so we must learn to recognize it as the form—the only one—in which such fragments of the true learning as we are destined to receive will be vouchsafed to us, if at all. The unsatisfactoriness, the frowns and squinting, the itching and scratching as you listen without taking in what is being said to you, or only in part, so that you cannot piece the argument together, should not be dismissed as signs of our chronic all-too-human weakness but welcomed and examined as signs of life in which part of the whole truth lies buried. . . .”

Nostalgia is never for art, that rake, with its “palpable design,” its “hand in its breeches pocket.” It leaks without gallantry under the door. It feuds with the help, unprepossessed, put off by the canned flattery of attendants. It hikes itself up, aimless in its airings, refuses to hike its skirts. Or it refuses to skirt the high road, consorts with the common lodger in the vestibule. Rubs vehemently against the glaucous “bloom” of dusk. Willem de Kooning, out of “What Abstract Art Means to Me” (1951):

Art never seems to make me peaceful or pure. I always seem to be wrapped in the melodrama of vulgarity. I do not think of inside or outside—or of art in general—as a situation of comfort. I know there is a terrific idea there somewhere, but whenever I want to get into it, I get a feeling of apathy and want to lie down and go to sleep. Some painters, including myself, do not care what chair they are sitting on. It does not even have to be a comfortable one. They are too nervous to find out where they ought to sit. They do not want to “sit in style.” Rather, they have found that painting—any kind of painting, any style of painting—to be painting at all, in fact—is a way of living today, a style of living, so to speak. That is where the form of it lies. It is exactly in its uselessness that it is free.

The sunlit slopes, leaf detritus down. Dogwoods and redbuds coming into their own. “At least as alive as the vulgar.” The way it is today un peu partout. Jean Cocteau, in a letter to New York, out of the Journals (1956):

You dislike tradition and the new. Your ideal would be an instantaneous tradition. The new is immediately attached to a school. Its life is over at the time. You classify and name it, and since you don’t allow an artist to experiment, you demand that he repeat himself and you replace him when he tires you. In that way you kill the flies.
I saw in the Museum of Modern Art an unforgettable scene. In a very clean nursery, fifty little girls were painting on tables covered with brushes, inks, tubes, gouache. They were not looking at their work and their tongues stuck out like those of dogs who have been conditioned to look strained on the striking of a bell. Nurses were taking care of these young creators of abstract art, and slapped their hands if by mistake what they painted represented something and dangerously inclined towards realism . . .

Attached neither to a community nor to one another, these painters experience a unique loneliness of a depth that is reached perhaps nowhere else in the world. From the four corners of their vast land, they have come to plunge themselves into the anonymity of New York, annihilation of their past being not the least compelling project of these aesthetic Legionnaires. . . . The very extremity of their isolation forces upon them a kind of optimism, an impulse to believe in their ability to dissociate some personal essence of their experience and rescue it as the beginning of a new world. For each is fatally aware that only what he constructs himself will ever be real to him. 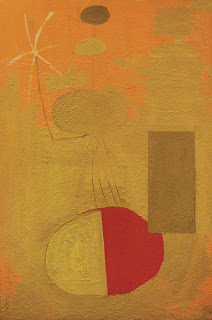 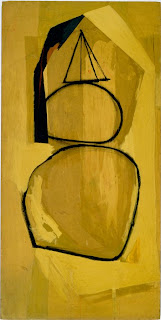