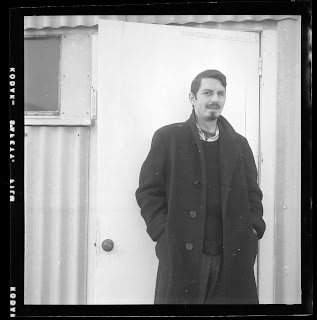 Chores and demands. Constrained here to musterings of the quasi-introuvable, of the seemingly overlooked, of the unnoted. Out of the Vincent Katz’s terrific Black Mountain College: Experiment in Art (2002)—recently, I see, out in paperback—two previously unpublished pieces. A poem by Robert Creeley:

There is this side of it.
And two weeks ago I was
reading
of it—a book, and a long poem:
Simon Bolivar.

And why not. One is much too
repentant. The secrets are
to be shared.

Why go to college. Or, a man said, it
is too far away.

If I don’t get there,—I did
once

If I don’t get there, this year
anyhow I know some of the names, I know
what it might have been like, say, or

The sky here, dark enough, tonight
the moon is
is not to any other
insistence,
is mute in
itself.

Tonight, fire. The race
of fire. And what the hell else to say but
run.

Rhythmically aligned—and, too, in terms of “theme” (particularly after “The sky here, dark enough . . .”)—to Creeley’s “I Know a Man” (“which was not his / name, the darkness sur- / rounds us”)? The final “run” here echoing “I Know a Man”’s emphatic “drive”? Usual jittery Creeleyesqueries, and feints of faintly humorous (“comediente”) and knowing obscurity. The sheer stuttering loveliness and sufficiency of “tonight / the moon is / is not to any other / insistence, / is mute in / itself.” (Of Olson—and “college”—Creeley writes, in an essay called “Olson and Black Mountain College” included in Black Mountain College: Experiment in Art: “I remember his saying once, ‘I need a college to think with.’ It seemed very true. He depended on multiple reference, relevant density, context particular, and occasion for the ‘testing some proof’ he speaks of in Maximus. Given that Black Mountain was a place ‘where people were more interested in what they didn’t know than in what they did,’ as the sculptor John Chamberlain later said, Olson’s was the perfect intelligence and intellectual habit for its use and coherence. He was immensely bored with the static, the talking about talking, which he dubbed ‘the universe of discourse,’ as opposed to that initial place, the literal and transforming world into which one was born, and then lived and died. He wanted to regain a way through to the primary, to have the human be again a freshness, not merely an echo of whatever it might once have been . . .”)

A poem by John Wieners:

I want to go back to old black mountain this morning,
I want to sing old songs with Dorn and Charlie O,
I want to take my bleeding heart,
I wanta break my bleeding heart
all over this city’s asphalt floor,
I want to swish a mountain shadow,
hear tree frogs say good morning, mister,
and the red clay roads will deep my feet in mud,
I want to sleep in the same pants every night
I want to eat spaghetti every night
with the ladies who play gay guitars
and the boys who lie down
in rain to see the stars,
I want the copperheads, the roses and the streams,
I want the mountains, and Lake Eden in my dreams
I want to go back to Black Mountain in the morning
and play ping pong in the cellar,
hear Billie Holliday through the woods
drink half a dollar wine till I’m drunk for good,
I want to leave the neon and the cement towers,
I want to spend my life in loneliness,
without a cheap lover to wash my face,
a lover who will fill my place when I turn my back,
I want to go back so fast
I want to be lonely,
I want only the shadow of those black mountains,
and kiss the rain, that’s my roman fountains,
I want to catch lunar moths,
and pee on the chairs.
I want to walk down mornings,
and pick up the mail,
I want to see the men in grey come from the
county jails to clean our fields,
to wash our faces,
I want to go back to those empty rooms,
and taste the dirty delight of lonely nights,
I want to cry in bed again,
and sleep under windows that have no glass,
drink my beer with ten outcasts that make up
the people, make up for lovers
I leave behind me when I take for cover
under the warm and black hills of black mountain.
I want to roll my cigarettes again, and play piano,
with one finger, I want to walk down pathways and linger
by roses and japanese vines,
I want to hear Miles Davis sing again,
and old Bessie do swing again,
I want to hear the husbands and wives throw ink again
on each other’s sink again,
those old tree frogs are calling me, the mountains,
are growing tall for me,
oh take me back, carry me back,
on the morning train, the tuesday train,
I shall go by the lumber yards,
and wait in the stations, the colored pardners,
I left behind, at Peek’s, at all the
old familiar roads I bicycled,
I will ride again by the rapids,
and see the dogs catch lizard s in the dawn,
oh those old grey mountains are calling,
those pink mountains are calling,
so it takes my lover away from me,
it brings me to a lonely country,
I go there, I run there, to see Charlie O,
and Connie O, with the dogs and babies who swear and wear no clothes,
I will give up my heart I will go in the dark to go back
to them someday, and take the beautiful bends, the road
that shows me my end, alone, alone, is the road I see,
but still I’ll go there and I’ll kiss the hornets and bees,
I’ll hear foxes under my window,
I’ll be afraid to go out in the dark, and I’ll
whisper into my pillow, your light’s gone out,
your light is up in the city, in bed with somebody else,
but it doesn’t matter, in the mountains,
it doesn’t matter in the hills, cuz there I’ll be,
and there I’ll wander from room to room,
from fellow to fonder, I’ll take my
chances in the hills again,
I’ll go and take my chances in the hills, again,
so mister man, buy a one-way ticket, I’m going back
dad I’m leaving this circuit, I’m cutting my space, I’m leaving
this time, I’m going on mountain, eastern mountain saving time,
so take your ticket for me, I’ll kiss you goodbye,
I’ll have nobody now, to kiss me and cry
I’ll have no lips to keep mine dry,
I’ll be alone, there,
I’ll be alone with nobody to care
for me,
but still I’m taking that trip,
and it’s the end of the road,
but the end shall be high up
and I’ll die with gold
clothes on,
in the black mountain of northern carolina,
I’ll die and my face will have a silver-lining.