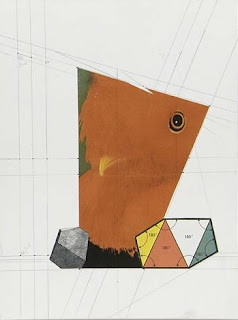 Five sandhill cranes flying south near Jackson, in the welling roseate light of sun-up’s world-tendering, the Vibe slicing through remnants of low-lying fog.

It is of the very nature of metaphor, and so of poetry, that it satisfies simultaneously the appetite for pertinence and the appetite for incongruity; with the possibility of securing large-scale rhythms within a whole work by shifting the emphasis on these elements back and forth.

Hear Oscar had hematitis, got by harping on a crane
but the Indians were floors below fishing through history
and Captain Parmay sits with his jugs toothsome but alarming . . .

That smooth-faced gentleman, tickling Commodity,
Commodity, the bias of the world—
The world, who of itself is peised well,
Made to run even upon even ground,
Till this advantage, this vile drawing bias,
This sway of motion, this Commodity,
Makes it take head from all indifferency,
From all direction, purpose, course, intent—

Real knowledge goes into natural man in titbits. A scrap here, a scrap there; always pertinent, linked to safety, or nutrition or pleasure.

As prophecy hath ever been one of the chief provinces of poesy, our poet here foretells from what we feel, what we are to fear; and in the style of other prophets, hath used the future tense for the preterit: since what he says shall be, is already to be seen, in the writings of some even of our most adored authors, in divinity, philosophy, physics, metaphysics, &c. (who are too good indeed to be named in such company.)

Nevertheless this all has a kind of linchpin severity. Swedenborg spoke of “correspondences”, but perhaps this could be taken further and in another direction than that of the stratum of mystical glues.

I mean or imply that certain truth exists. Certain colours exist in nature though great painters have striven vainly, and though the colour film is not yet perfected. Truth is not untrue’d by reason of our failure to fix it on paper. Certain objects are communicable to a man or woman only “with proper lighting”, they are perceptible in our own minds only with proper “lighting”, fitfully and by instants.

A striated sharpness
a glow zone to the front of the skull
riot of realms unbudged in fix
slower than tooth, slower than any
belt of earth
apt to remain over at
one catch never closed

The audacity of the rabbit—inert, unstirring, still—with the dog gangling along twenty feet off, nosing clumps of dirt a skunk’s dug up in the night, looking for grubs.

. . . the commercializing of the new commodity we aptly call “reading matter” could raise doubts concerning the authority of the page itself. What, we are bidden to ask by A Tale of a Tub, is verbal authority worth, if the work of any hack with adequate command of grammar can strike the eye and heft in the hand just like something substantial? That hacks and dunces preoccupied Swift and Pope is something that should not surprise us. By 98 percent of all empirical tests, the differences between Pope’s Iliad and anything at all by Ambrose Philips are imperceptible. Even the inventory of words they “arrange” is as nearly identical as makes no difference. Words being normally printed, we can now count them, and count their component letters, and discern that “English” has its statistical norms. Those norms make half a writer’s decisions for him.