Used to be, back in my quasi-conscientious days, when the onslaught of spur-of-the-moment improvisatory doodling existed only in the usual reveries of synaptic hazard spouted by any grandeur-struck mythomane, and I routinely made semi-coherent piles—in lieu of the recent chaos of nonce imperturbables—with a welcome malfeasance in a space (my island) just made for such slub knottings-up sub specie aeternitatis, and expelling thus the foetid earthly breezes with a rump hurricano of ungodly afflatus—used to be,—I say,—Fridays beckoned with a surcease, a diminuendo, a parry: no more preternaturally fictious adherency, the “assemblagist to the heavenly cohort” is a ruse, plus de mots idiots. Fat Ben Jonson’d stop by, muttering through sepia-colored teeth and imperfect Latinates: “Wee say it is a fleshy style, when there is much Periphrases, and circuit of words; and when with more then enough, it growes fat and corpulent; Arvina orationis, full of suet and tallow.” (Arvina orationis meaning, literally, “bacon speech” . . .) Or that morose and severely contained box of a man Henry James’d aver, rather plainly, that “story-tellers” (“an illogical, loose-thinking, ill-informed race”) ought concur in the reining in of such untoward reaches: “It is, of course, not well for people of imagination to have the divine faculty constantly snubbed and cross questioned and held to an account: but when once it is strong and lusty, it is very well that it should hold itself responsible to certain uncompromising realities.” (One suspects a congenital tameness provoked the note. In a 27 December 1869 letter to brother William—“Beloved Bill,—” it begins—written in Rome, James admits: “I never manage to write but a very small fraction of what has originally occurred to me. What you call the ‘animal heat’ of contemplation is sure to evaporate within half an hour . . .”)

Fit of the gods, fit of the ghosts. William James, out of a 3 January 1868 letter to Oliver Wendell Holmes, Jr. (“My dear Wendle,—”), written in Berlin and opening with lines by Heinrich Heine (out of “Die Lorelei”—Mark Twain, who, in “The Awful German Language” (1880) suggests it—the language—“ought to be gently and reverentlset aside among the dead languages, for only the dead have time to learn it”—translated Heine’s lines thus: “I cannot divine what it meaneth, / This haunting nameless pain”):

Ich weiss nicht was soll es bedeuten, dass ich so traurig bin, tonight. The ghosts of the past all start from their unquiet graves and keep dancing a senseless whirligig around me so that, after trying in vain to read three books, to sleep, or to think, I clutch the pen and ink and resolve to work off the fit by a few lines to one of the most obtrusive ghosts of all—namely the tall and lank one of Charles Street . . .

Outside of stories, he wanted nothing left in the background. This was made apparent in 1869, when Wm wrote to H’ry of visiting John La Farge to view several paintings then still under way. One in particular, Paradise Valley, a broad image of green fields near Newport, absolutely frayed Wm’s nerves. The painting had begun with a large female figure situated in the foreground, a white-draped presence occupying almost two-thirds of the large canvas.
Sometime during the work on the piece, La Farge had been moved to paint over the figure completely, leaving only the background and a tiny baby sheep. Wm couldn’t get his head around it. He understood the landscape, which was “as big as all out doors and flooded with light even in its botchy state.” But he couldn’t begin to fathom why La Farge had eliminated the woman in the foreground. “He ought to repaint a figure in it no matter how ‘quaint’ it will look to the vulgar.”

The pertinent lines out of William James’s letter (2 October 1869):

I spent a very pleasant 24 hrs. at Jno l. F.’s. He had been in very good physical condition but a bad diarrhoea on the Hudson River had undone him again temporarily. Of new things he had to show me non multa but on the whole multum. I dont know whether you have seen them. 1 Portrait of Dick Hunt’s son, unfinished and very handsome in color &c, but on the whole sentant trop la photographie, which I suspect played a good part in its production. 2 his big landscape of the gorge. A most honest, solid bit of study fm. nature, with less of his subjectivity than anything else of his I know. Full of light & splendor, and it kept “growing” on me all the time I was there. There is an immense amount of labor in it, and it must have taught him a great deal, which will be some consolation if it brings nothing to his pocket. It wants some man or animal in the foreground. 3 a vast green landscape of the fields near Paradise, originally meant as background to a white figure but with the latter painted out. Also as big as all out doors and flooded with light even in its botchy state. He ought to repaint a figure in it no matter how “quaint” it will look to the vulgar. 4 a woman sleeping in a flowered (japanese) dress so cool in color & definite in treatment that I should hardly have suspected who painted it. The large, fat weighty figure is admirably drawn—rarely have I seen a better rendering of the way a supine person sinks into her chair. John seems very cheerful but the total impression of the visit was a sad one. I got an equally vivid impression of the depth of his talent (you’ve no idea of the pure splendor of some of those things) and of his destitution of that vulgar cleverness neccessary to make it available. It’s really pitiful—the trouble he has to give himself to produce anything , and the shilly shally fumbling of his whole movement—made tenfold greater by his physical feebleness . . .

Of “frayed . . . nerves,” nothing. Though La Farge’s painting is certainly apt to induce a splendid vertigo. 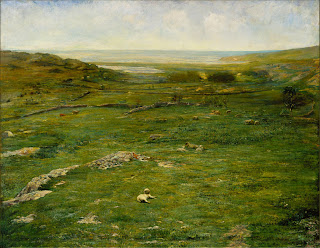