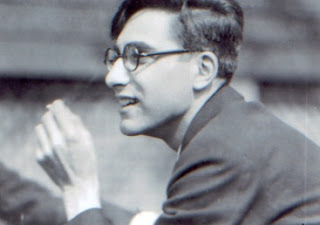 Cold, with cold’s staid and primeval light. Men scraping vehicles in May. Chores and errands thwarting yesterday’s intended sweet aimlessness. Zukofsky, out of “Peri Poietikes”: “What about measure, I learnt: / Look in your own ear and read. / Nor wrest knowledge / in no end of books.” Pound, in a note (18 November 1930) to Zukofsky: “Look into thine own ear and reade. All ballz and a great deal more are talked about prosody. If it dont ‘read’ good whasser use of it. Obviously the ole bokos that have a theory and read it ti tump ti tump ti TUMP / do NOT understand anything.” And Zukofsky, rehashing (out of the 1950 essay, “A Statement for Poetry”): “No verse is ‘free,’ however, if its rhythms inevitably carry the words in contexts that do not falsify the function of words as speech probing the possibilities and attractions of existence. This being the practice of poetry, prosody as such is of secondary interest to the poet. He looks, so to speak, into his ear as he does at the same time into his heart and intellect. His ear is sincere, if his words convey his awareness of the range of differences and subtleties of duration. He does not measure with handbook, and is not a pendulum . . .”

Zukofsky’s gleanings out of Poe’s Marginalia (out of Bottom: On Shakespeare):

‘All that the man of genius demands for his exaltation is moral matter in motion. It makes no difference whither tends the motion—whether for him or against him—and it is absolutely of no consequence “what is the matter.”’

‘. . . the naked Senses sometimes see too little—but then always they see too much.’

‘. . . in speaking of “moral courage” we imply the existence of the physical. Quite as reasonable an expression would be that of “bodily thought” . . .’

‘. . . something in the vanity of logic which addles a man’s brains. Your true logician gets, in time, to be logicalized, and then, so far as regards himself, the universe is one word. A thing, for him, no longer exists.’

‘I believe it is Montaigne who says—“People talk about thinking, but, for my part, I never begin to think until I sit down to write.” A better plan for him would have been, never to sit down to write until he had made an end of thinking.’

Noting Poe’s processual mien. Countering the clampdown of logic, wary of the systemic. Zukofsky (out of Bottom): “Reading Shakespeare has become for me partly a philosophy of suspecting philosophy and what I have called its Logical Fortunes. I mean ways of talking that are already granted a rather sublimated love. It loves its propositions which rarefy an existence that at one time drove them to propose. It is the look away from the intimacy of love.” Considering that, along with Poe’s “naked Senses” that “always . . . see too much”—out of a longer note beginning, “Were I called on to define, very briefly, the term ‘Art,’ I should call it ‘the reproduction of what the Senses perceive in Nature through the veil of the soul.’ The mere imitation, however accurate, of what is in Nature, entitles no man to the sacred name of ‘Artist’ . . .” and ending, “I have mentioned ‘the veil of the soul.’ Something of the kind appears indispensable in Art. We can, at any time, double the true beauty of an actual landscape by half closing our eyes as we look at it. The naked Senses sometimes see too little—but then always they see too much . . .”—I recall Frank O’Hara’s serious (and cheeky) bravado in “Personism: A Manifesto”:

Personism has nothing to do with philosophy, it’s all art. It does not have to do with personality or intimacy, far from it! But to give you a vague idea, one of its minimal aspects is to address itself to one person (other than the poet himself), thus evoking overtones of love without destroying love’s life-giving vulgarity, and sustaining the poet’s feelings towards the poem while preventing love from distracting him into feeling about the person.

The fleet look, half-veiled; the bounty of love marshaled by the particular; the whole pottage in singular stir (“sustaining . . . while preventing”); a poetics of “continual composition and decomposition” (Zukofsky quoting William Hazlitt).

William Hazlitt (out of “On Shakespeare and Milton”):

Shakspeare’s imagination is of the same plastic kind . . . “It glances from heaven to earth, from earth to heaven.” Its movement is rapid and devious. It unites the most opposite extremes; or, as Puck says, in boasting of his own feats, “puts a girdle round about the earth in forty minutes.” He seems always hurrying from his subject, even while describing it; but the stroke, like the lightning’s, is sure as it is sudden. He takes the widest possible range, but from that very range he has his choice of the greatest variety and aptitude of materials. He brings together images the most alike, but placed at the greatest distance from each other; that is, found in circumstances of the greatest dissimilitude. From the remoteness of his combinations, and the celerity with which they are effected, they coalesce the more indissolubly together. The more the thoughts are strangers to each other, and the longer they have been kept asunder, the more intimate does their union seem to become. Their felicity is equal to their force.