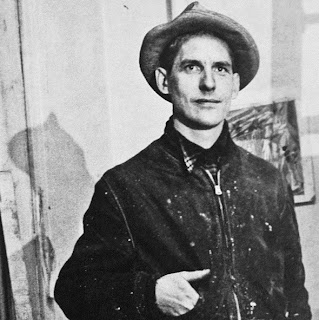 Willem de Kooning’s line (partially quoted by Clark Coolidge in a 7 January 1972 letter to Paul Metcalf): “Content is a glimpse of something, an encounter like a flash. It’s very tiny—very tiny, content.” Recalling somewhat a stray, lovely and percipient thing James Schuyler noted (writing about Jane Freilicher), that of “. . . the unexpectedness of nature, where the right place for a thing is where you find it.” A nonchalance (and an attending). I like the story Elaine de Kooning tells of how de Kooning would begin a painting by writing words across the canvas. 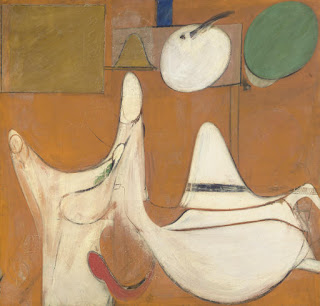 Talking about an untitled circa 1942 work:

I can almost remember the exact words—one like hope clear across the top, and one like man across the bottom . . . At the top, see how the first letter became the window shape he always used. Next is a loop that was part of the o, and then the p has become an apple with the downstroke making the leg of a table. The e has become a floor lamp seen from above. At the bottom, the capital M became a sort of hand—you know at that time Bill would look at his thumb and make a shape on the canvas. Then he would say to me, ‘You have to start somewhere.’ The rest of the shapes at the bottom were also suggested by the letters.

(Quoted by Harriet Janis and Rudi Blesh in the 1960 Grove Press De Kooning.) I think of Joe Brainard’s lines out of I Remember about Frank O’Hara:

I remember seeing Frank O’Hara write a poem once. We were watching a western on T.V. and he got up as tho to answer the telephone or to get a drink but instead he went over to the typewriter, leaned over it a bit, and typed for four or five minutes standing up. Then he pulled the piece of paper out of the typewriter and handed it to me to read. Then he lay back down to watch more T.V. I don’t remember the poem except that it had some cowboy dialect in it. 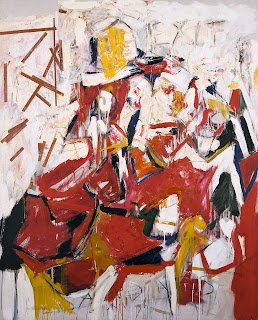 (Somewhat idly: is there any reason to consider Joan Miró’s 1923-24 MoMa-housed oil painting “Catalan Landscape (The Hunter)” with its tidily scripted letters “Sard” in the lower right—apparently a fragment, not of the the word sardines, rather of sardana, the name of a Catalonian folk dance—a prod, permission, and precursor to Goldberg’s painting? Perhaps.) 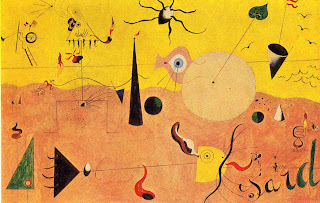 Too, I think—ah, the stagger, barrage and smattery of “mere” thinking—of the terribly moving “Preface” found in Clark Coolidge’s 2000 On the Nameways: Volume One:

I began writing these poems in an empty moment when I thought maybe I’d run out and had no more to do. Snap. I found lines coming to me on waking in the morning, insisting I follow them into odd short poems, strange to see, indicating what I knew not. Eventually I began writing them while watching movies (from Hopalong Cassidy Enters to Last Year at Marienbad) on satellite TV, a practice reminding me of DeKooning drawing with his left hand, Guston pen in hand watching the Watergate coverage, and of course Kerouac scribing his Blues. The point? Freedom. An overcoming of the obstacles erected by any conceptions of the poem. A glee here I hadn’t felt since writing the first poems of my own (1965). A casting off into the day’s winds, feeling light and lit, knowing I still have a long way to go, a lot more to lose.

Nonchalance and attending. There’s a kind of warning line in Mine: The One That Enters the Stories: “The steady congealing of losing one’s way into frictionless art.” The need to turn away at the point of attainment. To debunk the facility. “Adepts stop here / face around to take in the room / balance pie on head in lieu of breakfast / shed relief . . .” (Out of Coolidge’s “The Core Depth Dance Contest,” in On the Nameways.) Or, back to de Kooning, talking about “painting the Women” in “Content Is a Glimpse . . . ,” extracts of an interview with David Sylvester (out of Location 1 [1963]):

I took the attitude that I was going to succeed, and I also knew that this was just an illusion. I never was interested in how to make a good painting. For many years I was not interested in making a good painting—as one might say, “Now this is really a good painting” or a “perfect work.” I didn’t want to pin it down at all, I was interested in that before, but I found out it was not my nature. I didn’t work on it with the idea of perfection, but to see how far one could go—but not with the idea of really doing it. With anxiousness and dedication to fright maybe, or ecstasy, like the Divine Comedy, to be like a performer: to see how long you can stay on the stage with that imaginary audience. . . .