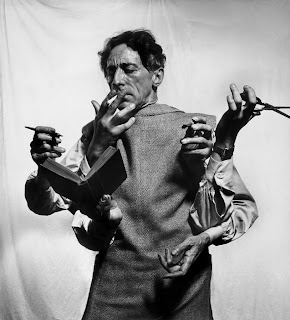 I was writing in a disorderly manner. At the centre we noticed that my voice was breaking, as it were, that I was writing in one of those crises in which the organism changes. In this way one dies several times before death and when one finally reaches death one resembles the sacred dancers of Spain.
These dancers dance in the church and the ancestral costumes are handed down through them. From century to century pieces of the costumes are replaced and now the costumes are still the same and not the same.

*
Tomorrow I could be no longer capable of writing this book. It will stop when the changing stops: the last day of convalescence. Then, I could write it, but it would no longer be a book, for what composes, directs and blocks it is the state in which I momentarily find myself. Later, I speak to you about an acrobat: ‘Every step cheats the fall.’ He does not know where the cord ends and even with his foot on firm ground he walks carefully.

*
If you encounter a sentence which irritates you, I put it there not like a reef to make you keel over, but
in order that
as though it were a buoy,
you discover how far I have gone.

*
Too many diverse milieux cause harm to the sensitive man who adapts himself. There was (once upon a time) a chameleon. In order to keep him warm his owner placed him on a multicoloured Scottish plaid.
The chameleon died of exhaustion.
I didn’t know why I created the Eugènes, the Potomak, the butterfly, or what relationship could in fact be established between them. Secret architecture. ‘What are you preparing?’ Canche asked me. I blushed. Impossible to answer him.

*
‘Your pockets,’ said Canche, ‘are full of matches and you never use them.’ That, I replied to Canche, is the elegance of riches. Abuse seems to me vulgar and use is already a lack of tact. I give you a thousand matches. You are free to light your pipe.

*
What the public reproaches you for, cultivate: it is you.

*
My modesty: to be completely naked, tidy up my bedroom and put the light out. And everyone brings his lamp.

*
Beware of those who preserve old anarchies.

*
I’m going to confess to you one of my first symptoms.
In the past press cuttings would have made me weep and now I find strength in them. The more people laugh at me and the more this ‘me’ vanishes, I want people to laugh at it. One evening Axonge* congratulated me. ‘I was sure of you,’ he said, ‘but I expected this crisis to occur later.’
I didn’t succeed in understanding him.
I shall save nothing from my burning past. Won’t I become a pillar of sugar if I turn round?

*
Travel, Persicaire told me. If you change without moving, objects and people move round about you. When you travel do you know if your vision is new or do you simply see new things?
And then you return home like a stranger.
Now as I remain motionless I like this vertigo and my ingratitude . . .

Translated by Margaret Crosland (Cocteau’s World: An Anthology of Writings by Jean Cocteau). Recalling William Carlos Williams’s prose extravagarias Kora in Hell: Improvisations (1920) and Spring and All (1923). The one beginning (brashly, unannounced, and with, oddly enough, its own medicinal ref)—

Fools have big wombs. For the rest?—here is penny-royal if one knows to use it. But time is only another liar, so go along the wall a little further: if blackberries prove bitter there’ll be mushrooms, fairy-ring mushrooms, in the grass, sweetest of all fungi.

—and rather quickly turning, not unlike Cocteau’s piece, to a kind of dance of doubt and defiance—

Ay dio! I could say so much were it not for the tunes changing, changing, darting so many ways. One step and the cart’s left you sprawling. Here’s the way! and—you’re hip bogged. And there’s blame of the light too: when eyes are humming birds who’ll tie them with a lead string? But it’s the tunes they want most, —send them skipping out at the tree tops. Whistle then! who’d stop the leaves swarming; curving down the east in their braided jackets? Well enough—but there’s small comfort in naked branches when the heart’s not set that way.

A man’s desire is to win his way to some hilltop. But against him seem to swarm a hundred jumping devils. These are his constant companions, these are the friendly images which he has invented out of his mind and which are inviting him to rest and to disport himself according to hidden reasons. The man being half a poet is cast down and longs to rid himself of his torment and his tormentors.

The other (Spring and All) famously beginning—

If anything of moment results—so much the better. And so much the more likely will it be that no one will want to see it.
There is a constant barrier between the reader and his consciousness of immediate contact with the world. If there is an ocean it is here. Or rather, the whole world is between: Yesterday, tomorrow, Europe, Asia, Africa,—all things removed and impossible, the tower of the church at Seville, the Parthenon.
What do they mean when they say: “I do not like your poems; you have no faith whatever. You seem neither to have suffered nor, in fact, to have felt anything very deeply. There is nothing appealing in what you say but on the contrary the poems are positively repellent. They are heartless, cruel, they make fun of humanity . . .

Some muddling around turns up no evidence of Williams knowing of Le Potomak. He did, in 1924, meet Cocteau in Paris, chez Nancy Cunard, and in the Autobiography writes: “In the evening to La Cigale for Jean Cocteau’s Juliet and Romeo of which I remember nothing at all save that it in no way resembled Shakespeare’s story.” Too, there’s a rather odd (diverging out of its initial “obliquity” into something like “resigned joy”) c. 1949 piece in the Williams oeuvre called “Spring Is Here Again, Sir.” (Its line about Cocteau reads, roughly: “My dear Cocteau / who lunches at times / with Picasso”):

from then to now. Which
leaves very little
but the sun and air
unless one should prefer
a pool of human spittle

over which to grieve.
Rhyme it regularly if you
will. I say the night
is not always gay for
an old man who has sinned.

But the brook! is mine
and I must still prefer it
to the summits of Tibet
from which to take off:
—of spring, to the air

for relief! smell of clover,
cherries are ripening.
We lay, Floss and I, on
the grass together, in
the warm air: a bird flew

into a bush, dipped our
hands in the running water—
cold, too cold; but found
it, to our satisfaction,
as in the past, still wet.

A poem that is a series of recommencements, with only the brook (Goffle Brook is a tributary of the Passaic River) running continuously through it. One recalls Cocteau’s declared sense of constantly shedding skins (“my voice was breaking . . . I was writing in one of those crises in which the organism changes”), of Le Potomak’s being a book showing him “undergoing a change like a bird moulting” (reported by Crosland). Which, that need for continual renewal, is precisely Williams’s concern (see, in the “Prologue” to Kora in Hell: “the thing that stands eternally in the way of really good writing is always one: the virtual impossibility of lifting to the imagination those things which lie under the direct scrutiny of the senses, close to the nose. It is this difficulty that sets a value upon all works of art and makes them a necessity. The senses witnessing what is immediately before them in detail see a finality which they cling to in despair, not knowing which way to turn. Thus the so-called natural or scientific array becomes fixed, the walking devil of modern life.”) The “array . . . fixed”—Williams’s desire to avoid what he subsequently calls “the trammels of literature.” Thus the quarrel with Wallace Stevens, out of whose letter Williams quotes in the “Prologue”:

My idea is that in order to carry a thing to the extreme necessity to convey it one has to stick to it; . . . Given a fixed point of view, realistic, imagistic or what you will, everything adjusts itself to that point of view; and the process of adjustment is a world in flux, as it should be for a poet. But to fidget with points of view leads always to new beginnings and incessant new beginnings lead to sterility.

* One eighteenth century pharmacopoeia defines axonge thus: “graisse d’homme préparée, avec des herbes, & qui est bonne pour les humeurs froides. Man’s Grease.” Cocteau, in a note about names found in Le Potomak: “I was in a chemist’s shop in Normandy with a friend I had in common with Gide. Look at the containers, I said to him, you might think they were names from Gide’s books. This was how I christened the characters in Le Potomak. This and several other examples of friendly teasing should not be taken the wrong way.” Bien sûr.