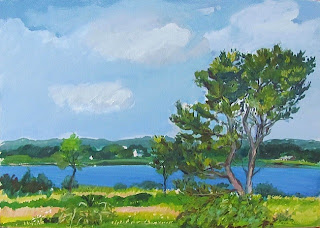 James Schuyler, out of a 1961 note about the work of Jane Freilicher (Selected Art Writings, 1998): “The eye goes over the surface as though a distant view had swum forward, its colors thinly condensing, all available. The colors are cartographic, the tender accuracies that locate the places of the world.”

Mark Twain, out of Tom Sawyer Abroad (1894). Huck Finn, sailing east in a balloon, worrying Tom Sawyer with queries about their location:

“Because if we was going so fast we ought to be past Illinois, oughtn’t we?”
“Certainly.”
“Well, we ain’t.”
“What’s the reason we ain’t?”
“I know by the color. We’re right over Illinois yet. And you can see for yourself that Indiana ain’t in sight.”
“I wonder what’s the matter with you, Huck. You know by the color?”
“Yes—of course I do.”
“What’s the color got to do with it?”
“It’s got everything to do with it. Illinois is green, Indiana is pink. You show me any pink down here if you can. No, sir, it’s green.”
“Indiana pink? Why, what a lie!”
“It ain’t no lie; I’ve seen it on the map, and it’s pink.”
You never see a person so aggravated and disgusted. He says—
“Well, if I was such a numbskull as you, Huck Finn, I would jump over. Seen it on the map! Huck Finn, did you reckon the States was the same color out doors that they are on the map?”
“Tom Sawyer, what’s a map for? Ain’t it to learn you facts?”

Clark Coolidge, out of Mine: The One That Enters the Stories (1982): “Lights are darting deep beneath the wide open but barely functioning eye. These score marks upon the page the man is holding up in the darkness which when a finger is across them will produce sounds approximating those of stars singe-ing their ways across the firmament. For thought there is no containment, it billows across every barricade, even to the dead of days. I know not what to say, what to hear nor see.”

Stray notes made to coalesce of a Friday morn. (Cloud shanties, their “dilapidat benefices” tossed across the dawn-roiled blue-gray of the sky. Buzz of early migrants in the treetops. The dog, with blunt particularity, verifying turds. Me gazing “aloft.”) Coolidge, out of “Partial Nurtures” (Sound as Thought: Poems 1982-1984): “I too is a mention.” Shrugging off the stymie of the lyric subject, aiming a cock-eyed grin at Rimbaud. (See, too, in Mine: The One That Enters the Stories: “I started my mouth to talking.” A kind of blues line redemption of the fettered unholy “I.”)

Or I read—thumbing through pages of “tender accuracies”—out of On the Nameways: Volume One (2000), Coolidge’s “Another Backyard Deviance”:

And I think of Williams’s “Let the metaphysical take care of itself, the arts have nothing to do with it.” And: “There’s nothing sentimental about a machine. . . . A poem is a small (or large) machine made of words.” The way, putting one thing against another thing (“the best of the hard / to catch”) the two inevitably seem to belong together (“you have to keep”) . . . 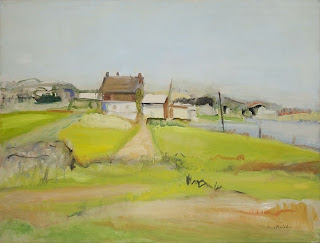 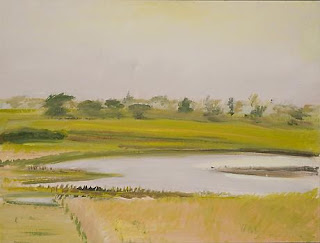