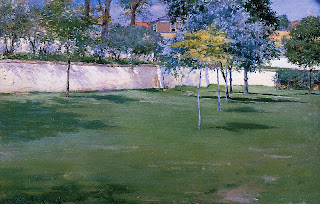 Three-fourths of the houses in this city are on narrow stilts, finer than a girl’s wrists: it is largely a question of keeping one’s feet dry, and of privacy. In the morning you forget what the punishment was. Probably it was something like eating a pretzel or going into the back yard. Still, you can’t tell.

—John Ashbery, out of “Variations, Calypso and Fugue on a Theme of Ella Wheeler Wilcox”
(The Double Dream of Spring, 1970)

How Much Longer Shall I Be Able To Inhabit The Divine
and the day is bright gray turning green
feminine marvelous and tough
watching the sun come up over the Navy Yard
to write scotch-tape body in a notebook
had 17 and 1/2 milligrams
Dear Margie, hello. It is 5:15 a.m.

The sun boomed calmly
in the wind around
the monument. Texans
and Australians climbed
to the top to look
at Beacon Hill and
the Common. Later we
walked round the base
of the hill to the Navy
Yard, and the black
and white twigs stuck
in the sky above the old
hull . . .

—Frank O’Hara, out of “A Walk on Sunday Afternoon”
(The Collected Poems of Frank O'Hara, 1971)

The turning of the globe is not so real to us
As the seasons turning and the days that rise out of early gray
—The world is all cut-outs then—and slip or step steadily down
The slopes of our lives where the emotions and needs sprout. “I
Need you,” tree, that dominates this yard, thick-waisted, tall
And crook branched. Its bark scales off like that which we forget:
Pain, an introduction at a party, what precisely happened umpteen
Years or days or hours ago. And that same blue jay returns, or perhaps
It is another . . .


to build a temple there
without floor, roof candle bed
mind into window

spit image, means to some end
in echelon ion
where ladder = knuckle

why knot thus: so as
upon a time once phoenix in fact
halcyon elude hatchet

I was painting the
Whooping Crane, the
fingers-flying-pinnae
when the news came

One of my (Landowska’s) compatriots
Raposki of Cracow . .
Brought from the Low Countries
(Breughel’s spaces)
On a wagon drawn by eight mules
A counter-bass more than
Eight yards tall . . to reach its neck
Fitted . . a ladder . . (on a platform)
Many arms drew the huge bow.

Solitary at midnight in my back yard, my thoughts gone from me a long while,
Walking the old hills of Judea, with the beautiful gentle god by my side,
Speeding through space . . . . speeding through heaven and the stars,
Speeding amid the seven satellites and the broad ring and the diameter of eighty
thousand miles,
Speeding with tailed meteors . . . . throwing fire-balls like the rest . . .

Some of these star fires must surely be ash by now.
I dawdle outside in my back yard,
Humming old songs that no one cares about anymore.
The hat of darkness tilts the night sky
Inch by inch, foot by black foot,
over the Blue Ridge.
How bright the fire of the world was, I think to myself,
Before white hair and the ash of days.
I gaze at the constellations,
forgetting whatever it was I had to say.

I’ve known a Heaven, like a Tent—
To wrap its shining Yards—
Pluck up its stakes, and disappear—
Without the sound of Boards
Or Rip of Nail Or Carpenter—
But just the miles of Stare—
That signalize a Show’s Retreat—
In North America—

million years, disrupted,
rise like plain ice-air
around me, thinning

the present time:
I spin the sheet
sheer in a long arc

to the yard’s shrub bank:
the grain splinters and,
reentering,

sinks toward the foundation
of its next three
hundred million years.

Our hands turn to molluscs, we swap boxes of unopened hunger for hooks and a common play in football. Number 48 ties a fly on the 9 yard line, saving the game, the big game, “a safari and gin, thanks.” Somewhere a rhino is panhandling through Nebraska.

All this with many mulctings of the man,
Effective colonizer sharply stopped
In the door-yard by his own capacious bloom.
But that this bloom grown riper, showing nibs
Of its eventual roundness, puerile tints
Of spiced and weathery rouges, should complex
The stopper to indulgent fatalist
Was unforeseen.

Father came in wearing his Dick Tracy necktie: “How about a drink everyone?”
I said, “Let’s go outside a while.” Then we went onto the porch and sat on the Abraham
Lincoln swing.
You sat on the eyes, mouth, and beard part, and I sat on the knees.
In the yard across the street we saw a snowman holding a garbage can lid smashed into
a likeness of the mad English king, George the Third.

The trouble with you is
That sitting on a bench in the back yard
You see an old plank in the fence become
A jeweled honeycomb of golden wires
Discoursing music, etc.

Many shapes of wings
on the sky and the table;
and large men carefully at dusk
lengthened by lights     watering their lawns

No one knows so well what widening means. It means that yards are yards and so many of them are perfect. By that I mean I know.
This is not so.
I am not telling the story I am repeating what I have been reading.

—Gertrude Stein, out of “If You Had Three Husbands” (Geography and Plays, 1922)

But the mole knoweth what is there, & the worm shall tell it thee.
Does not the worm erect a pillar in the mouldering church yard?
And a palace of eternity in the jaws of the hungry grave
Over his porch these words are written. Take thy bliss, O Man!

In 1860—long after Poe’s burial in an unmarked grave—Judge Neilson Poe ordered a marble slab, properly inscribed. “It was lying in the yard with other monuments ready for delivery when a train of the Northern Central Railroad accidentally jumped the track and, of all slabs, shattered Poe’s beyond repair.”

I bathe me anonymous.
I am unknown.
And in a rail-
road yard at dawn.

Biting a stick wondering
what it’s all about under
the orange tree gloom bridge.
Let’s count and
amount to everything we’re
not supposed to.

lemonade. One minute summer is all balm
and the next it’s boredom and fury,

the library closed, the back yard blandly

familiar. The horizonless summer
recedes with a whoosh on all sides

Monday: I heard Henry Miller lived in Santa Monica—information that later proved false—and that he frequented the park mornings despite failing strength necessitating a walker. It’s a busy park, long and narrow and subdued by the faint chatter of mockingbirds in shrubbery and droning planes as vague as the mountains in the distance. Many convalescents take the sun there, playing shuffleboard or gazing out to sea. I watched a bus slowly, surely tear off a WALK / DON’T WALK sign as it squeezed around a tight corner. No Henry, but as might be expected more than one man resembling his younger self from afar—his kind of hat, glasses. . . .

Tuesday: Arabic graffiti, predominant in the park, is a pleasant change for the eye, as are the remnant frame bungalows around LA, providing curious soft spots among the stucco. Their dry “Little Rascals” yards. The slight adrenalin rush at every glint of a distant wheelchair nearly made me give up my search. But it is honorable, a magpie told me, and after an hour strolling the length of the park I discreetly swept the crowded porch of a retirement hotel across Ocean Boulevard with my binoculars.

—Merrill Gilfillan, out of “Red-Haired Boy” (River Through Rivertown, 1982)

Everything is fragmentary, even the life of vastest views. Huge nude bodies lie over the landscape in one version of all of this. Only I will have them do. Greased in their rolling they often eye me, their absent inventor. I would like to see them, I often tell myself, but never have it that I be them. Such a self-distance makes the space of fragments? Great scrolls of fucking notation lie around the yard. And why do I tell you to see the death in them there?