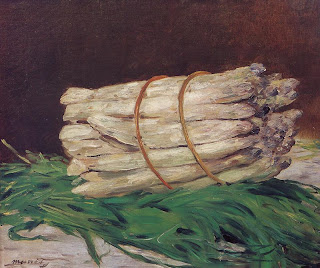 Charles bought a picture of some asparagus from Manet, one of his extraordinary small still lifes, where a lemon or rose is lambent in the dark. It was a bundle of twenty stalks bound in straw. Manet wanted 800 francs for it, a substantial sum, and Charles, thrilled, sent 1,000. A week later Charles received a small canvas signed with a simple M in return. It was a single asparagus stalk laid across a table with an accompanying note: ‘This seems to have slipped from the bundle.’ 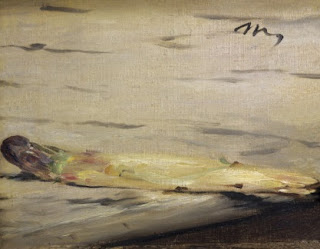 Proust, who knew Charles’s paintings well from visits to his apartment, retells the story to his credit. In his novels there is an Impressionist painter, Elstir, modelled partly on Whistler and partly on Renoir. The Duke de Guermantes fumes that ‘There was nothing else in the picture. A bundle of asparagus exactly like what you’re eating now. But I must say I declined to swallow Monsieur Elstir’s asparagus. He asked three hundred francs for a bundle of asparagus. A Louis, that’s as much as they’re worth, even if they are out of season. I thought it a bit stiff.’

De Waal, quoting Charles Ephrussi’s writing about the Impressionists, whose intent and reach he delineates precisely:

. . . to make the figures indivisible from their background, as though they were the product of it, so that to appreciate the picture the eye must take it in as a whole, looking at it from the correct distance—such are the ideals of the new school. It has not learnt its optical catechism, it disdains pictorial rules and regulations, it renders what it sees as it sees it, spontaneously, well or badly, uncompromisingly, without comment, without verbiage. In its horror of platitude it seeks for fresh themes, it haunts the corridors of theatres, cafés, cabarets, even low music-halls; the glare of cheap dance-halls does not alarm its members; and they go boating on the Seine in the Paris suburbs.

Lines uncluttered, nigh capable of returning Impressionism to its unruly purity of seeing. De Waal:

This was to be the setting of Renoir’s bravura Le Déjeuner des canotiers, the Luncheon of the Boating Party. It shows a pleasingly louche afternoon at the Maison Fournaise, a restaurant by the Seine at one of the newly popular places that Parisian day-trippers could reach by train. Pleasure boats and a skiff can be seen through the silvery-grey willows. A red-and-white striped awning protects the party from the glare of the sun. It is after lunch in Renoir’s new world of painters, patrons and actresses, and everyone is a friend. Models smoke, drink and talk amongst the detritus of the empty bottles and the meal left on the tables. There are no rules or regulations here.
The actress Ellen Andrée, in a hat with a flower pinned to it, raises her glass to her lips. Baron Raoul Barbier, a former mayor of colonial Saigon, his brown bowler hat pushed back, talks to the young daughter of the proprietor. Her brother, straw-hatted like a professional oarsman, stands in the foreground surveying the lunch. [Gustave] Caillebotte, relaxed and fit in a white singlet and boater, sits astride his chair looking at the young seamstress Aline Charigot, Renoir’s lover and future wife. The artist Paul Lhote sits with a proprietorial arm around the actress Jeanne Samary. It is a matrix of smiling conversation and flirtation.
And Charles is there. He is the man at the very back, in the top hat and black suit, turning slightly away, seen glancingly. You can just see his red-brown beard. He is talking with a pleasantly open-faced, poorly shaved [Jules] Laforgue, dressed as a proper poet in a working man’s cap and what could even be a corduroy jacket.
I doubt that Charles really wore his benedictine clothes, heavy and dark, to a boating party in the summer sunshine, a top hat instead of a boater. This is an in-joke about his Mécène uniform between friends, Renoir suggesting that patrons and critics are needed, somewhere in the background, on the edge, even on the sunniest and most liberated of days.
Proust writes of this picture, noting a ‘gentleman . . . wearing a top hat at a boating party where he was clearly out of place, which proved that for Elstir he was not only a regular sitter, but a friend, perhaps a patron’.

Capable of expunging my disdain (“horror of platitude”) for the ineffably rosy Renoir? I don’t know. I like to look at the rather gaminesque Jules Laforgue in what, to me, looks like a bicycle delivery boy’s cap, the only one in the picture who’s outside looking—with indifference—in. 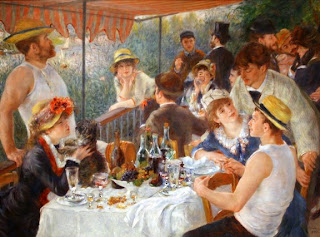