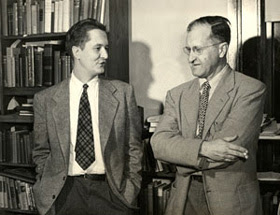 Before I left Whittlesey House** I asked Diarmuid Russell to let me be the first to read Guy Davenport’s novel. The other day it came in and Dorothy Parker,*** one of the editors and a friend of mine, let me have it to read. I stayed up for seven hours last night reading it, and I think it’s an overwhelming, sorrowful, beautiful job of writing and I frankly went to bed at 5:00 in the morning disturbed, shaken, and humble in the light of its unmistakable signs of true, burgeoning genius. It is certainly not a great novel—there is much about it that is immature—but I am so convinced of its youthful truth and passion and genuine loveliness that I can only look upon Guy Davenport with the greatest awe and respect. If Guy doesn’t become, within the next decade or so, one of America’s best writers, then my faith in whatever grim and fickle god who so capriciously guides the destines of sad, golden men—men like Guy Davenport—I will be shattered forever. Such poetry, such beauty!

With added effusions re: Effie Garner ending with: “The astute publisher and editor . . . would accept it per se—with all of its faults—just to get their hands on such a promising talent.” (Later, Styron writes of another editor’s opinion of the book: “in effect, that he had never seen so promising a talent wasted in such a dubious, avant-garde style.” Curious if the manuscript of Effie Garner still exists. No sense, in Davenport’s statements,**** of fiction composed prior to what appears in Tatlin! (1974).

* Styron and Davenport (and No Time for Sergeants-author Mac Hyman) were writing students together under Blackburn. Of Blackburn Davenport wrote (reviewing Hyman’s letters): “His classes made one hungry to learn and his patient, unfoolable and (just beneath the genial and avuncular jollying on) stern guiding of young writers into an art form more difficult than most of them suspected gave the world . . .” (Davenport thence proceeding to list Styron and several others).

** Whittlesey House, where Styron worked (“I am what is euphemistically known as an editor”) was an imprint of McGraw-Hill.

*** Not the Dorothy Parker of the “Constant Reader” column in The New Yorker (“And it is that word ‘hummy’, my darlings, that marks the first place in The House at Pooh Corner at which Tonstant Weader Fwowed up.”) Dorothy “Didi” Parker, later Dorothy Parker Maloff, a colleague at Whittlesey House.

It was my intention, when I began writing fiction several years ago, to construct texts that were both written and drawn . . . In my first work of fiction, Tatlin (1974) I drew careful replicas of works by Vladimir Tatlin that exist only as poor reproductions. These were meant to be as much a part of the story as my narrative and required more time to do than the writing. No critic has commented on them, as seeing and reading are now alienated.

Out of a document called “Edinburgh, May 1963” collected in the Jill Turnbull and Hamish Whyte-edited More Words: Gael Turnbull on Poets and Poetry (Shearsman / Mariscat, 2012)—Turnbull recalling a visit to Ian Hamilton Finlay and Jessie McGuffie in Edinburgh (“24 Fettes Row. Last house in a row of Victorian buildings. Up two flights of broad stone staris, well worn. Dark, damp, like a mine shaft. A little slip of paper on the door. Wild Hawthorn Press. Poor. Old. Tired. Horse.”)—a lovely glimpse of Ronald Johnson and Jonathan Williams:

Earlier, Jessie* had asked about “wee Ronald” who had visited them. “I was fair taken with him. He gave us some super poems.” This was Ronald Johnson, at that time Jonathan Williams’s companion, and she occasionally mentioned him later, always “wee Ronald.” It must have been his quietness and gentleness. I tell her how much, in fact, he hadn’t liked Britain generally, and was glad to get back to America. She wonders if this was all the walking. “Aye, Jonathan does like to walk so. We got postcards from him, from the Lakes.”
Then I confess how wrong I had been, on my earlier visit, about Coronado, when I had corrected something in one of Ronald’s’ poems , that Coronado had reached as far north as Kansas.** Ian and Jessie laugh in glee. “Aye, you were that!” Because I had been so “superior” when I had corrected it . . .

In a silk almost sheath dress, a little unfashionably short, showing boyish knees. Her hair over her forehead and down her cheeks so that she almost seems to hide behind it. A gentle face, looks barely 15 at times, a few freckles. Is almost deaf in one ear so that walking down the street she’d have to change sides, in an apologetic animal sort of way, in order to hear. Says things are “super” (the ultimate adjective) and “posh” (anything expensive or fancy). Ian also. Both use Scots words all the time. Ian “I was fair scunner’t.” And Jessie asking me if I’d like a “peece” so that it took me a moment to remember, my grandmother, “a jeely-piece” (a slice of bread and butter with jam on)> Their ultimate disparagement of anyone: “a twit.”

Scunner: intr. “To feel reluctance (to do something), to hesitate, to feel disgust or revulsion or discouragement.”

who were bearded as
goats,

with the hump of a camel, the mane
of a lion

& who carried
their tails erect as they ran,

O Coronado, all country
is round to

those who lose sight of the
ground.

from an atmospheric condition

in the fall of the year, called

smoke in the air,