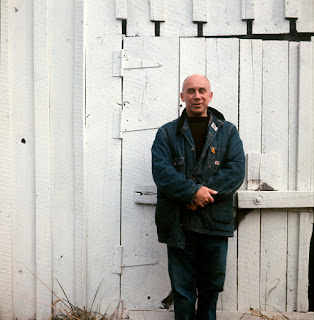 A morning’s inch or so of snow, abruptly accumulating. Recalling Philippe Soupault’s “Neige, neige reste en Norvège / Jusqu’à ce que j’apprenne le solfège.” (A couplet I routinely attempt to re-render, and routinely fail to do so . . .) Flaubert, out of the Francis Steegmuller-translated Intimate Notebook, 1840-1841:

There is a rather stupid axiom which says that the word renders the thought—it would be more truthful to say that it distorts it. Do you ever utter a sentence just as you think it? Will you write a novel as you have conceived it?
If sentences really rendered thoughts! —What effect would be produced on you by pictures if you saw them as a sequence of brush strokes? I could sing you vague, delightful tunes that I have in my head and make you feel the passions that I think of; I could tell you all my reveries and you will know nothing about them because there are no words to express them. Art is nothing but this strange translation of thought by form.

Out of Thomas Merton’s Journals, a note regarding Guy Davenport’s 17 January 1967 visit:

Jonathan Williams, Guy Davenport and Gene Meatyard were here yesterday. Williams impressive but seemingly a little aloof, though friendly. All were friendly. Williams said all the poets sooner or later get into a fight with Cid Corman and he would be prepared to publish an anthology of “My last letter from Cid Corman” contributed by various—or all the—poets. Williams gets around and knows everybody and has marvelous books full of drawings and writings of all these people—and some excellent pictures in them. Guy Davenport—a recluse, vulnerable, pleasant and kind, touched no beer. The one who made the greatest impression on me as artist was Gene Meatyard, the photographer—does marvelous arresting visionary things, most haunting and suggestive, mythical, photography I ever saw. I felt that here was someone really going somewhere.
For the rest Williams and Davenport were tired of young poets in Lexington and I read them bits of “Edifying Cables” which got nowhere—in the end we went and looked at the lake and they got cheese and went home. But I hope Gene Meatyard—and Guy—will come back.

Nothing about the “jiggers of bourbon.” In an 18 January 1967 letter to James Laughlin, Merton writes:

Jonathan was here yesterday and we had a good visit. With Guy Davenport, a poet, and with that fabulous photographer Gene Meatyard. I would like very much to try some of Gene’s picture as possibilities for covers of the paperbacks of mine you are doing. I am sure he’d have perfect things for both the books of this year—the Selected and the Desert Fathers (or whenever they are coming out).*

You, Reader, need no prologue. Do you think these Horatian Odes are all about you? Far from the new wine to need a bundle. You are no bundle. Go advertise yourself.

Why not more pictures? Why not more rhythms, melody, etc.? All suitable questions to be answered some other time. The realm of spirit is two doors down the hall. There you can obtain more soul than you are ready to cope with, Buster.

The poet has not announced these mosaics on purpose. Furthermore he has changed his address and his poetics are on vacation.

He is not roaring in the old tunnel.

Go shake hands with the comics if you demand a preface.

My attitudes are common and my ironies are no less usual than the bright pages of your favorite magazine. The soaps, the smells, the liquors, the insurance, the third, dull, gin-soaked cheer: what more do you want, Rabble?

Go write your own prologue.

I am the incarnation of everybody and the zones of reassurance.

I am the obstetrician of good fortune. I live in the social cages of joy.

It is morning, afternoon or evening. Begin.

I too have slept here in my stolen Cadillac.

I too have understudied the Paradise swan.

Some of the quasi-vituperatory sass of William Carlos Williams? Early in the book, another formal prod and acknowledgment: “Since language has become a medium in which we are totally immersed, there is no longer any need to say anything. The saying says itself all around us. No one need attend. Listening is obsolete. So is silence. Each one travels alone in a small blue capsule of indignation. (Some of the better informed have declared war on language.)” (Writing to Jacques Maritain, 29 October 1966, Merton reports: “The ‘Edifying Cables’ are finished and constitute a solemn anti-language which people will not know what to do with, but it does not matter.” To Cid Corman (5 September 1966): “Maybe you will feel it does not communicate: it is imprecise, noisy, crude, full of vulgarity and parody, making faces, criticizing and so on . . .” And to Robert Lax (4 November 1966), with doubt and good humor:

The edifying cables are sheer exhausted. I have no further opinions except that I added million cables each more edifying than the next. It is now so many cables I make the Verazzano bridge look like a merry go round. And after all that is what it is: nothing but a mere suspension, a question mark, a hanging in mid air between true and false, between the Island of Staten and the Island of Coney, an everlasting pons asinorum for the Brooklyns and the Newarks. So too are the edifying cables, the pons asinorum of my Thomas Mann epoch, which is finish. I dunno about them cables, but I guess it is enough for a bad book. You are right about the sulphur. I am the sulphur mechanic of the alchemy club . . .

Some pointers in the barrage of the “cables”:

The perfect act is empty. Who can see it? He who forgets form. Out of the formed, the unformed, the empty act proceeds with its own form. Perfect form is momentary. Its perfection vanishes at once. Perfection and emptiness work together, for they are the same: the coincidence of momentary form and eternal nothingness. Form: the flash of nothingness. Forget form, and it suddenly appears, ringed and reverberating with its own light, which is nothing. Well, then: stop seeking. Let it all happen. Let it come and go. What? Everything: i.e., nothing.

And a line of Meister Eckhart: “No man can see God except he be blind, nor know him except through ignorance, nor understand him except through folly.” A kind of via negativa. (Recalling, imprecisely, A. R. Ammons’s “. . . you don’t want the poem to amount to no more than what you already knew when you began to write. Whatever kind of instrument it may be, it must be one capable of churning up what you didn’t already know.” Or maybe it’s Jack Spicer’s “An unvert chooses to have no place to turn.” That unfettered concept of the poet refusing to reconnoitre the primal surge, its dumb welling up.)


* Out of the 1997 Thomas Merton and James Laughlin: Selected Letters. The editor, in a footnote, errs in identifying “Jonathan”—pointing to Gnomon Press editor (and Monks Pond contributor) Jonathan Greene in lieu of Williams.