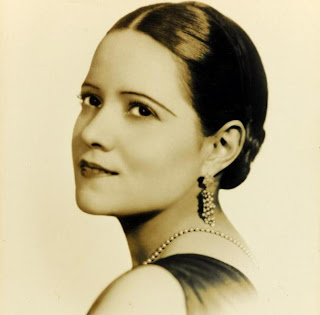 Morning tohu-bohu. All thumbs and ratiocinatory cockamamie. (Cockamamie: “Likely a corrupting of the French décalcomanie, a mania for transferring pictures, tracings, &c. See décalage, out of décaler, to displace.”) Out of Mary Ruefle’s notational romp “On Secrets: Eight Beginnings, Two Ends” (in Madness, Rack, and Honey: Collected Lectures):

I was twenty-four years old and someone took a phonograph needle and played for me the Brazilian soprano Bidú Sayão, an international opera star in the 1930s, ’40s, and ’50s. She found a lifelong friend in the composer Villa-Lobos, who once rose in the morning, took a piece of paper, and sketched the hills on the horizon. The outline or contour of those hills he then set onto a musical graph, and where the notes fell, he played them. After I believed this, a musician told me not a word of it was true, but I like it so much I continue to believe it. Whatever the case, I think Villa-Lobos understood the voice of things. In the aria of Bachianas brasileiras no. 5, Bidú Sayão persuaded Villa-Lobos to transcribe for her voice what had originally been a violin solo; an impromptu, experimental take was made in New York in 1945, “just to hear how it would sound.” It was never recut. Everyone in the studio knew, immediately, there was no need. The recording lasted seven minutes. First you hear Bidú Sayão sing the part of the violin, then you hear the violin, then you hear Bidú Sayão re-sing the melody, this time with her mouth completely closed —she is humming—and the last note you hear her sing, an octave’s leap, was achieved with a completely closed mouth.

Serendipity (how regularly it arrives to retrieve the wayward, to rescue the confused—or confuse the rescued) offers up a sketch Basil Bunting drew, diagramming “Briggflatts” (out of the Vancouver newspaper Georgia Straight’s “Writing 6” insert, c. 1970), and looking, too, like “hills on the horizon.” Bunting, talking with Warren Tallman and Peter Quartermain:

WT:   Let’s see. That’s it? That is Briggflatts?
PQ:   Now these are what, musical movements?
WT:   A mountain range in Switzerland.
BB:   The notion of the diagram is this, roughly. Mountain range in Switzerland, yes. You have a poem. You’re going to have five parts because it’s got to be an uneven number. So that the central one should be the one apex, there. But what is new, the only new thing that I knew of in, in doing it, was that instead of having one climax in the other parts you have two. In the others the first climax is the greater and it trails off . . .

BB:   Once I had got the thing clear in my head as a diagram, I simply set to work and wrote it, writing when I could, three lines in the train on the way to work, three lines on the way home from work, Saturday mornings when there was not much to do, because there’s no stock exchange on Saturday morning, I’d get perhaps ten or fifteen lines written—and always the cutting out and the buggering about and the rewriting and so on.
One little notebook, two little notebooks, completely full both sides of each page, with the cuttings out and so forth, And I reckon roughly twenty thousand words, twenty thousand lines I mean, to get my seven hundred . . .

BB:   . . . the bull I noticed one day in a farm near Throckley where I was living at the moment; and, you know, it struck me, at once, nobody had noticed the bull has a tenor voice. You hear of the bull bellowing and this, that, and the other. But in fact he bellows in the most melodious tenor, a beautiful tenor voice, quite different from the rather raucous contralto of the cow. And, in the spring, the bull does in fact, if he’s with the cows, dance, on the tips of his toes, and part of the business of showing off, showing that he is protecting them, you see. He’s not really doing anything, but he sees somebody walking by the hedge and he begins to dance at once, just to demonstrate what an indispensable creature he is. It is delightful, and it bears such a, a strong resemblance to the behaviour of young men in general and . . . well . . . all creatures. That came . . . it was there in my notebooks, but it had nothing to do with Briggflatts until a fairly late stage of the construction of the poem, when I actually began to write things down . . .

“The outline or contour of those hills he then set onto a musical graph, and where the notes fell, he played them.” Seeing music, reading signs, however ungainly, in the salvageable fields of the physical world. Recalling: Ezra Pound’s seeing, at the Disciplinary Training Center in Pisa, the birds perched on the stave of running fence wires as arrays of musical notes.

Richard Sieburth, after quoting Olson’s 1950 “Projective Verse” (“It is the advantage of the typewriter that, due to its rigidity and its space precisions, it can, for a poet, indicate exactly the breath, the pauses, the suspensions even of syllables, the juxtapositions even of parts of phrases, which he intends. For the first time the poet has the stave and the bar a musician has had . . .”), puts it thus (The Pisan Cantos):

And so it is in the opening movement of the Pisans, for having briefly reached the summit of Mount Purgatory by the end of Canto 74, Pound’s poem leaves the domain of verbal signs altogether to move into pure musical notation: Canto 75 simply prints the score of Janequin’s Renaissance motet, “The Song of the Birds”—their paradisal jazz fully visible to the eye in the alighting of notes on the stave. Perched on the fence wires of the DTC, these songbirds return in various permutations throughout the Pisans, carefully calibrated by the typewriter.

Sieburth points to some examples. Out of Canto 79:

with 8 birds on a wire
or rather on 3 wires 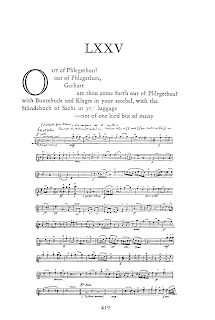