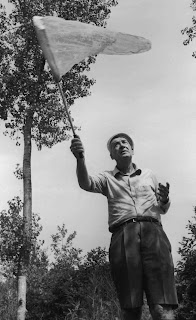 Slept through “all Klaxons and Alarums.” (Klaxon: a word I associate with Conrad Aiken: “Newcomers, joining the slowly moving mass, honked, hooted, skirled their Klaxons, yipped and snarled . . .” Dipping said word out of a friend’s copy of Aiken’s Collected Novels one summer morning in Ocracoke, North Carolina. Klaxon: what the Oxford calls “a warning hooter.” Is it derived out of the Greek klazō, a word used to register the calls of wild swans? One longs for the verity of such lovely conjuncts, and opens a book of Dickinson’s letters to see a postscript reading: “The bobolinks have gone.”) Up, disheveled, to an enormous ivory-colored moon impaled by the branches of the oak. The sky heart-piercingly blue . . . (And Anne Carson, out of the “out of nowhere” period—forgivably, mysteriously coy, not, as now, rotely so—in “The Fall of Rome: A Traveller’s Guide” (Glass, Irony and God): “A stranger is poor, voracious and turbulent. / He comes // from nowhere in particular // and pushes prices up. / His method of knowing something / is to eat it.”)

Jamming (to no end). A way of making explicit a waywardness, dumping okra into the gumbo, some viscous collateral, some scrupulous reagent. (Dickinson’s hint: “interrogate the daisies.”) Puzzling of late—in my biblical illiteracy, lines out of The Gospel According to St. John: “Verily, verily, I say unto you, Except a corn of wheat fall into the ground and die, it abideth alone: but if it die, it bringeth forth much fruit.” Isn’t some echo of that in Frank O’Hara’s mock-epical “Oedipus Rex” squib, the fragment—“He falls; but even in falling he is higher than those who fly into the ordinary sun”—found in the notebook O’Hara carried the night he got hit by a vehicle on the Fire Island beach? (And Dickinson, out of a letter, falling inescapably into the common measure: “Life is death we’re lengthy at, death the hinge of life.”) To no end.

The palpable hinge. Its material way of participating in a two-ness. Rapport with obliquity. Up late, the day’s matins rung, night elbowed out of the way. Nabokov (Ada):

. . . I wish to examine the essence of Time, not its lapse, for I do not believe that its essence can be reduced to its lapse. I wish to caress Time.
One can be a lover of Space and its possibilities: take, for example, speed, the smoothness and sword-swish of speed; the aquiline glory of ruling velocity; the joy cry of the curve; and one can be an amateur of Time, an epicure of duration. I delight sensually in Time, in its stuff and spread, in the fall of its folds, in the very impalpability of its grayish gauze, in the coolness of its continuum . . . I am also aware that Time is a fluid medium for the culture of metaphors.

. . . Maybe the only thing that hints at a sense of Time is rhythm; not the recurrent beats of the rhythm but the gap between two such beats, the gray gap between black beats: the Tender Interval. The regular throb itself merely brings back the miserable idea of measurement, but in between, something like true Time lurks.

An influx of simultaneities: F. Scott Fitzgerald’s “So we beat on, boats against the current, borne back ceaselessly into the past . . .” throttling down The Great Gatsby and Walter Benjamin’s famous lines out of “On the Concept of History”:

There is a picture by Klee called Angelus Novus. It shows an angel who seems about to move away from something he stares at. His eyes are wide, his mouth is open, his wings spread. This is how the angel of history must look. His face is turned towards the past. Where a chain of events appears before us, he sees one single catastrophe, which keeps piling wreckage upon wreckage and hurls it at his feet. The angel would like to stay, awaken the dead, and make whole what has been smashed. But a storm is blowing from Paradise and has got caught in his wings; it is so strong that the angel can no longer close them. This storm drives him irresistibly into the future, to which his back is turned, while the pile of debris before him grows toward the sky. That which we call progress is this storm.

Capture to no end.
Posted by John Latta at 7:21 AM