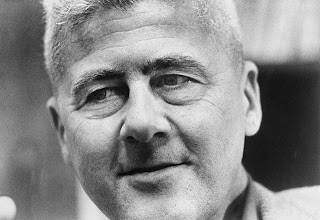 Marianne Moore, in a citational tangle:

“Strangeness is a quality,” Howard Nemerov says, “belonging inseparably to language and vision” and—quoting Conrad, “‘It is above all, in the first place, to make you see,’ said Joseph Conrad, of the object of art; and he said again, more formally, that the writer’s object is ‘to render the highest kind of justice to the visible world.’ Seeing, and saying;—language is a special extension of the power of seeing, inasmuch as it can make visible not only the already visible world; but through it the invisible world of relations and affinities.”

A quote-knot, a semiotic thicket. Nemerov quotes Conrad in a 1959 lecture called “The Swaying Form”—the remainder is untraceable. The titular “swaying form” is out of John Florio’s 1603 rendering of Montaigne’s “Of Repenting,” wherein Montaigne makes language a natural thing, one of “theſe original qualities . . . not grubd out” (“by force expreſſing it ſelfe”) and oddly akin to “ſound fits and natural luſts”:

The Latine tongue is to me in a manner naturall; I vnderſtand it better then French; but it is now fortie yeares, I have not made vſe of it to ſpeake, nor much to write: yet in ſome extreame emotions and ſuddaine paſſions, wherein I haue twice or thrice falen, ſince my yeares of diſcretion; and namely one, when my father, being in perfect health, fell all along vpon me in a ſwoune, I haue euer, euen from my very hart vttered my firſt words in latine: Nature ruſhing and by force expreſſing it ſelfe, againſt ſo long a cuſtome; the like example is aleaged of diuers others. Thoſe which in my time, haue attempted to correct the faſhions of the world by new opinions, reforme the vices of aparance; thoſe of eſſence they leaue vntouched, if they encreaſe them not. And their encreaſe is much to be feared. We willinglie protract all other well-doing, vpon theſe externall reformations, of leſſe coſt, and of greater merit; whereby we ſatiſfie good-cheape, other natural, conſubſtantiall and inteſtine vices. Looke a little into the courſe of our experience. There is no man (if he liſten to himſelfe) that doth not diſcouer in himſelfe a peculiar forme of his, a ſwaieng forme, which wreſtleth against the inſtitution, and againſt the tempeſts of paſſions, which are contrarie vnto him. As for me, I feele not my ſelfe much agitated by a ſhock; I commonly finde my ſelfe in mine owne place, as are ſluggiſh and lumpiſh bodies. If I am not cloſe and neare vnto my ſelfe, I am never farre-off: My debauches or exceſſes tranſport me not much. There is nothing extreame and ſtrange: yet have I sound fits and vigorous luſts.

Nemerov, who quotes only the sentence containing the reference to “a ſwaieng forme,” says of “Florio’s somewhat dreamlike English” that it “duplicates nicely the possibilities of Montaigne’s phrase, ‘une forme maistresse’”:

The form, that is, is simultaneously ruling and very variable, or fickle; shifting and protean as the form of water in a stream, where it is difficult or impossible to divide what remains from what runs away. The passage, read in this way, speaks of something in us which is double in nature, on both sides of things at once or by turns. And I would identify this “forme” with the impulse to art, the energy or libido which makes works of art. It is no paradox to say that the artistic impulse fights against “the art,” for anyone who persists in this business knows that a part of his struggle is precisely against “the art,” that is, against the accepted and settled standards of art in his time.

Is it merely the “period” that makes me think of Kerouac’s famous lines to John Clellon Holmes (out of a letter of 5 June 1952)?

What I’m beginning to discover now is something beyond the novel and beyond the arbitrary confines of the story . . . into the realms of revealed Picture . . . revealed whatever . . . revelated prose . . . wild form, man, wild form. Wild form’s the only form holds what I have to say—my mind is exploding to say something about every image and every memory in—I have now an irrational lust to set down everything I know—in narrowing circles around the core of my last writing, very last writing, when I am an old man or ready to die, will be calm like the center of whirlpools and Beethoven’s quartets—I love the world, and especially do I love the external eye and the shining heart of pure heart-to-heart mornings in a sane eternity, with love and security, but at this time in my life I’m making myself sick to find the wild form that can grow with my wild heart.