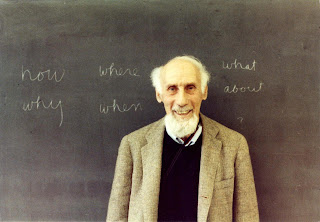 Odd constringency in the throat, and the unyielding cold, saturnine and impinging. Slept up to the alarm, and plunged out unready. “Lice in its seams despise the jacket shrunk to the world’s core . . .” Bunting. That quotidian push to avoid the obvious, and to render the burgeoning in a fraught denial, a cornucopiack’d naught. “A plethora of empties, a satiety of nix.” Or there’s Bunting’s economy of feigned indifference: “Vaults stored with slugs to relish, / my quilt a litter of husks, I prosper / lying low, little concerned . . .” Leaving: the question of how to proceed in the foliageous wilderness except endlessly: leaf by imperturbably green leaf. Robert Lax, who found a rebuttal in hermitry, out of “Tractatus I-IV”:

I
he was determined this time not to write about anything, to keep as far away from any possible subject as he could and just to keep going, to include or to exclude whatever came to mind, not necessarily to lead it in, not necessarily to leave it out: to let things rise to his consciousness, to be examined briefly, and let fall again or invited to enter. he knew these places well, these ups and downs, these ins and outs, he saw them as he’d see a building, an old and quite familiar building. he ran around it through the day, and all through the night, in dreams, he was mounting and descending its well-worn stairs. as a watcher, he would watch things rise, or as an actor, he himself would climb, and fall. (one memory jarred with another: one would collide with another.) no, he would not approach a single subject: not one of the many that played through his mind through the day. (there was a process of knitting going on: the form of the stitches was more important than the color of the yarn.) to keep going: to turn one wheel after another: a large one after a small one, a small one after a large one, until all wheels were spinning, innumerable wheels spinning, and spinning, perhaps, within the circumference of a single, very large wheel; a single globe.
he would not stop now to describe the globe: describe a globe: all globes except for their sizes were much alike. he would not attempt to describe a moment of something moving, of something regretted, desired, lost. the moments were clear in his memory, but he had not a word for one of them.
even as the rains fell, the times fell, the moments fell. the moments dropped as from a moving cloud. they intensified as they neared a particular point, and then, again, they diminished. even as the rains spoke, the times spoke: articulations just beyond the realm of consciousness. there were accumulations and releases; releases and re-accumulation. whatever was scattered, was gathered; whatever was gathered, was scattered. no time stood for long; no moment endured forever. each moment proclaimed the business of the moment. in every moment, hidden or manifest, there was a possible fulfillment. each moment made its demand, and each its offer. each was a sphere; each held to its sphericity a moment.
the realm he lived in was not a realm of earth: could hardly even be called a realm of sky: the realm of mind was neither here nor there: it knew its own true north, its own true west. its storms were not land storms, were not sky storms, were not like storms at sea. its rains fell in their season, not earth’s seasons. the realm of mind: united and divided: united within itself; divided against itself; united within themselves; divided against themselves . . .

Compelled, too, to record some lines out of Lax’s “Journal D” (quoted in Peter France’s 1996 Hermits: The Insights of Solitude):

i have given my mind a long romp, too. it has said whatever thing came to mind, often. i have written down the form of these echoes in the mind . . .

to watch and to listen; hardly to watch or to listen; not to act unless called upon; a passive way of life. but one that leads often to great and real activity. what is given up is vain action, and what remains is true activity. participation in eternal life, which has been defined as pure act. (he who does not act at all, but does not sleep, approaches this state of true activity.) the best activities of mind, soul & body are those that proceed from this pure state. (they are empty acts, goal-less acts, acts that can proceed without calculation or conscious effort.) like respiration or digestion they are acts that take place usually without being noticed, and yet they advance the life of the whole.

How proceed to a writing like that—a thing of “pure act”—a writing that is defiantly not a mere assembling of “sorts,” that Cagean drawing of lots, the aleatory dodge. (That defiance a sign of the writing’s impurity.) Bumping up against the crux (“the jacket shrunk to the world’s core”): how to evade the preternatural impingements of the present, the ordinary particulars of its posture and strut, its gear and gumption so impeccably tailored (and fitting) in advance. Lax (replying to the query: “How did you come to settle in Greece?”):

I had been living in New York quite a bit, and spending a lot of time with New Yorkers, and wherever I was I was hearing the same—the New York—answers to every question, and I realised that both the questions and answers that I was hearing were New York-based. And I realised that neither the questions nor the answers were the ones I was asking myself but I was surrounded by this language that had the questions and the answers knitted into it. And the only way out was to leave the city.

In the language of the inserted errata slip: “For ‘New York’ and ‘New Yorkers’ read [and here a term is required to delineate the amassed and watery congeries of current unrelenting poetry “activity”—a word whose origin is aptly found in the 15th c. Cloud of Unknowing] . . .” The cold “constringency” of habitus and doxa . . . oy.
Posted by John Latta at 7:39 AM