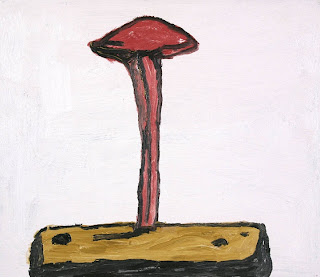 Even as one heat another heat expels,
Or as one nail by strength drives out another,
So the remembrance of my former love
Is by a newer object quite forgotten.

—William Shakespeare, out of Two Gentlemen of Verona (c. 1590)

A broken mirror nailed up over a chipped enamel basin, whose turgid waters
Reflect the fly-specked calendar—with ecstatic Dutch girl clasping tulips—
On the far wall. Hanging from one nail, an old velvet hat with a tattered bit
of veiling—last remnant of former finery.
The bed well made. The whole place scrupulously clean, but cold and damp.

All this, wedged into a pyramidal ray of light, is my own invention.

God is an animal figure
Clearly headless.
He bewitches his quarry
with ambiguous wounds
The wolf or poor ass
had only stolen straw.

Necessitation and contingency. Fad to have your ears cropped. That content does not intrude. Everything written according to the rule of the infield fly. Troll bridge. Neon arrow posit. Residue of sinus condition. Nails hats to the wall. Eventually the scratches become scabs. Inverted nipple. Random sample.

[As for that single hard protuberance upon his snout, that is his great horn; it is the weapon with which he battles the Lion, the Elephant, the Tiger, and other four-legged animals. Because of his great strength, he is able to pierce a large piece of wood clean through, like a nail poking through a sweet potato.]

—Eliot Weinberger, out of “The Rhinoceros” (An Elemental Thing, 2007)

. . . hold that door for the Cassius of Bar None
a raw turf for old coots the whole country tied in ropes
and gets shot through the pants like some gumption not yet
can drive a nail at twenty paces a bandanna full of doubt
walks off a good ways hollering riders
up to their necks in hot bacon
ready to draw down on this whole tar nation
and I hear Cassidy’s waiting

I hid the loot there, and had a secret dusty airforce made of cross-beam sticks with crude nail landing gears and a tail all hid in the old coal bin, ready for pubertical war (in case I got tired of the Black Thief) and so—I had a light dimly shining down (a flashlight through a cloth of black and blue, thunder) . . .

Thing is to find something simple
As for example Pa Stadtvolk;
Hooks to hang gutters on roofs,
A spike and half-circle, patented ’em and then made ’em;
Worth a good million, not a book in the place;
Got a horse about twenty years after, seen him
Of a Saturday afternoon
When they’d taken down an old fence,
Ole Pa out there knockin the nails out
(To save ’em). I hear he smoked good cigars.

. . . The
Days tick by, each so unique, each so alike: what is that chatter
In the grass? May is not a flowering month so much as shades
Of green, yellow-green, blue-green, or emerald or dusted like
The lilac leaves. The lilac trusses stand in bud. A cardinal
Passes like a flying tulip, alights and nails the green day
Down. One flame in a fire of sea-soaked, copper-fed wood:
A red that leaps from green and holds it there.

Is happiness the name for our (involuntary) complicity with chance?
Anything could happen
A boy in the sun drives nails into a fruit a sign (cloud) in the wind swings
A woman descends a ladder into mud it gives way
But today’s thought is different
Better to presuppose late
We eat with relief from our formlessness
Each day is drawn to its scene or scene to its day the image already under way and formed to
proceed
Perhaps happiness is what we volunteer

Dignity is
fragrant & looks like a little
brown nail. The leaves
of hidden worth are deeply cut;
a 19th century American
artist & inventor. Sir
Thomas Campion blooms in July
pinkly with notched petals.

Nailed up in a box,
Nailed up in a pen, nailed up in a room
That once enclosed you amiably, you write,
“Finished. No more. The end,” signing your name,
Frantic, but proud of penmanship.

. . . I am racing towards the fear that kills
them off, friends and lovers, hast’ning through tears
like alcohol high in the throat of hills
and hills of night, alluring! their black cheers
falling upon my ears like nails. And there
the bars grow thick with onanists and camps
and bivouacs of bears with clubs . . .

I have a knife held by two nails flat to the casing of my kitchen china closet. It has a blade about 8 inches long, of high-grade steel, joined to an ebony handle by a collar of brass—trade-marked Encore, Thomas Turner, Cutler to His Majesty—bought in Oxford in 1911 for cutting bread and cheese . . .

Ah, but to play man number one,
To drive the dagger in his heart,

To lay his brain upon the board
And pick the acrid colors out,

To nail his thought across the door,
Its wings spread wide to rain and snow,

To strike his living hi and ho,
To tick it, tock it, turn it true,

To bang it from a savage blue,
Jangling the metal of the strings . . .

And that thin cry, like a needle piercing the ear, the insistent cicada,
And the ticking of snow around oil drums in the Dakotas,
The thin whine of telephone wires in the wind of a Michigan winter,
The shriek of nails as old shingles are ripped from the top of a roof . . .

all breath away—
a sound of hammered nails

—Gael Turnbul, out of “Residues: Down the Sluice of Time” (While Breath Persist, 1992)

. . . I couldn’t deliver. Even to emerge arch and eccentric, ready for the evening chat and sherry—no, I certainly couldn’t. I had mad thoughts and insoluble anguish, begged to survive intact without the grace of wit, without the freedom to please, without this landscape disease. The ditty I listened for in the forge would make a scorpion stammer. Read Gorki’s childhood again, drove a nail through my own.

—James Tate, out of “Daydreaming in the Forge” (Riven Doggeries, 1979)

—Hugh Kenner, out of “Lisping in Numbers” (Historical Fictions, 1990)

The self, Hugo said, is the body. Our knowledge of what’s other is a knowledge of our body. My seeing a Monet is a knowledge of my own eye, which is both an obstruction between me and the Monet and the medium by which I see it at all. If my eye is healthy and keen I can forget it. We do not watch our hand, nor yet the hammer, when driving a nail. We watch the nail. Reading, we see Robinson Crusoe with his parrot on his shoulder, yellow sands, green ocean, three goats on a knoll.

—Guy Davenport, out of “Wo es war, soll ich werden”
(The Drummer of the Eleventh North Devonshire Fusiliers, 1990)

Welcome brutal possessor
of the memory cards,
on the wall under wainscoting
a nail holds the thread.

. . . that a Candle out of a Musket will pierce through an Inch-board, or an urinal force a nail through a Plank; yet can few or none believe thus much without a visible experiment . . .

—Sir Thomas Browne, out of Pseudodoxia Epidemica: or, Enquries into Very Many Received
Tenets and Commonly Presumed Truths, 1658)

so as to bear a nail

The nail is lost. Perhaps the shoe;
horse and rider, kingdom, too.

only the number
remains
∙ 2 ∙

on an oval disc
of celluloid
tacked

to the white-enameled
woodwork
with

For the oil dozing
With one eye open
In its bottle, for
The cleft-footed garlic
Hung by a nail, for
The salt and pepper
Weighing the house down
Against the storms . . .

So our virtues
Lie in the interpretation of the time:
And power, unto itself most commendable,
Hath not a tomb so evident as a chair
To extol what it hath done.
One fire drives out one fire; one nail, one nail;
Rights by rights founder, strengths by strengths do fail.