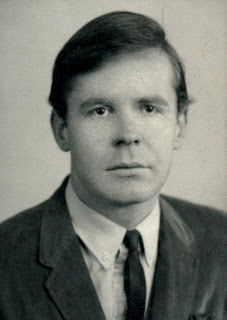 Ronald Johnson, at the end of detailing the contents of ARK in the autobiographical sketch “Up Till Now,” writes:

By 99 I had everything on board, and take off—it should have been foreshadowed—on a spaceship. Off to explore the universe with enough of the old blooming buzzy earth to get on with under alien skies.

“ARK 99, Arches XXXIII” (and the book itself) ending thus “Aship” under “skies indigo, gold moon” in a barrage of language, triumph-tempered, anthemic, utopian and grand:

Oompapah! to lead the band
anystray orchestra
knows who destination

core of the universe
(so rings redwood of eons)
gospel sentience

“from going to and fro
in the earth, and from walking
up and down in it”

as speech arc Simulacrum, O
chorus us Homo Sapiens
in a major key!

Origins great aorta
leaved from the wrist up, but
yet to attain the skies

all arrowed a rainbow midair,
ad astra per aspera
countdown for Lift Off

A ship tightly packed (“enough of the old blooming buzzy earth”): with Samuel Butler, Charles Doughty, Wyndham Lewis and Guy Davenport (“Dawn in Erewhon”), Aaron Copland (“Fanfare for the Common Man”), The Book of Job (“And the Lord said vnto Satan, Whence commest thou? Then Satan answered the Lord, and sayde, From going to and fro in the earth, and from walking vp and downe in it.”), the Latin saying writ across the Great Seal of Kansas (“ad astra per aspera,” roughly, “through strife to the stars”), and the Aristotelian “Unmoved Mover” (here become a kind of combo of Poundian “Unwobbling Pivot” and phallic “omnipotent / poised in flesh”) . . .

Turns out Johnson’s “interplanetary turn”—that yearning for far-flung and tender accuracies small and large—dates back considerably. In the 1969 paperback Holding Your Eight Hands: An Anthology of Science Fiction Verse, edited by Edward Lucie-Smith, one finds an uncollected Ronald Johnson piece called “The Invaders.” (Lucie-Smith, in the “Introduction” points to the seventeenth-century poet “Samuel Butler’s satire ‘The Elephant in the Moon’”—early sci-fi—and quotes a few lines presumably spoken by “one of the deluded virtuosi of the Royal Society” who’s peering through a telescope:

Quoth he,—Th’ Inhabitants o’ th’ Moon,
Who, when the Sun shines hot at Noon,
Do live in Cellars under ground
Of eight Miles deep, and eighty round,
(In which at once they fortify
Against the Sun, and th’ Enemy),
Which they count Towns and Cities there,
Because their People’s civiler
Than those rude Peasants, that are found
To live upon the upper Ground,
Call’d Privolvans, with whom they are
Perpetually in open War;
And now both Armies, highly ’nrag’d,
Are in a bloody Fight engag’d,
And many fall on both Sides slain,
As by the Glass ’tis clear, and plain.

Not the Erewhon Butler.) Here’s the Johnson piece:

disappeared
with a melodious twang,
&

—was circled by grassy satellites . . .

a bed of Iris beyond

clandestinely, in our orchards—


while Smart walks
the Arctic
wrapped in the dog-star,


There are no flying saucers:

of Albert Pinkham
Ryder,
over


And Mahler is a nova of
virus
invading us

(Above are the stars
written

by extra-terrestrials on the tombstone


Whitman
was a Martian.

descends in mystic
7’s
the stairs

from Quasar to Orange to Atom—


with the delicacy, & the stealth, of the ghost, of a flea.

Poe, Samuel Palmer, Christopher Smart, Pinkham Ryder, Mahler and the others—Johnson’s usual band and cohort. Against Jack Spicer’s sense of the work’s being merely “dictated by” Martians, Johnson posits a fully charged (and laconic, and half-kidding) Martian / extra-terrestrial identity itself to a range of writers and artists. Johnson, quoted by Lucie-Smith:

“We live now,” as Thoreau said, “between a microscopic and a telescopic world,” and where our sight leaves off our imaginations begin. Quasars and oranges are equally mysterious, and both the inward and the extra-terrestrial beckon us at the limits of vision. The cosmos is kaleidoscopic at either end, and, like a Möbius strip, it leads us backward and forward in time—at the same time. When science is no longer seeing it is fiction, or poetry, and makes its own solutions with intuition as stepping stones. Science-fiction is literature typical of our time, for in it we realize that where we are going and what is to come may not be at all the same thing. Let us be star-grazers rather than star-gazers.

no cannibal, come
down from Mars, makes it, so
sweetly:
“O, do you see that little fly,
climbing up the wall?
waltzing
so’s not to get his ashes hauled . . .”
our aspirations collapse,
curiously,
like in a letter,
a cisalpine American, pining:
“Ah, let me see again
a sweeping wheel of real, good, genuine
Kansas-type Space . . .
just so, silencing,
blue-idling . . .
and wander into town, wanting
to get my head all busted up, worrying little
re/ background radiation,
or the rats,
who sing, sort of crazed-like,
loudly in the darkened fields,
below the lolling, silver
Space-Platform,
at Abilene

Sounding, with that “sweeping” Kansan prairie “blue-idling” by that “pining” American, rather like Ronald Johnson. Though Williams claims it “written for the writer Fielding Dawson while I was at Black Mountain College in 1955.”)
Posted by John Latta at 6:46 AM