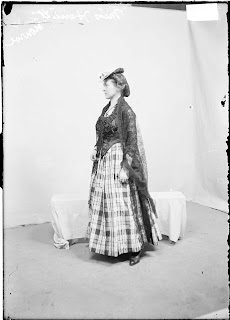 Harriet Monroe dressed in costume for the Streets of Paris performance at the Coliseum, c. 1906

Gael Turnbull, an anecdote, circa 1990, out of “What Is Poetry ‘About’?”—a previously unpublished piece found in More Words—Gael Turnbull on Poets & Poetry (Shearsman / Mariscat, 2012):

I was approached by a well established but not large-circulation magazine, asking for a contribution within specified limits on ‘The State of Poetry’. Quotations were appended from various poets, mostly contemporary and by no means all published by Faber & Faber.
After some thought and inability to generalize on the extraordinary volume and variety of poems being currently written and published and even read, I decided to take the words at their other primary meaning as “The State”, through its various powerful agencies: the Educational System, the Universities, the various Arts Councils, the British Council, even in its now perhaps diminishing role, the BBC.
I wrote on the theme of “who pays the piper plays the tune” and questioned whether the State had ever before so powerfully subsidized and controlled the production and publications of poetry, and wondered “to what end?”
Perhaps needless to say, my contribution was not printed. In fact, I did not even get it returned or the courtesy of a note to explain why. Was it that it was not sufficiently well written? That judgment I could accept. That it was not relevant? That might be argued, but was fair opinion. Or did they exclude it simply because they disagreed?

“Various powerful agencies.” Last week, under the (pre-provided, no haphazardry or measurelessness here) rubric of “I have a Harriet news tip!” (I love the exclamatory breathlessness of that canned subject line, drumming up a manufactory of fervor: think of being on the receiving end of such a battery of the inauthentic . . .), I wrote* to the Poetry Foundation, purveyors, through “Harriet,” of what (rather sardonically, perhaps) is labeled “News & Community.” I put it simply:

In the new Chicago Review, Kent Johnson reviews Marjorie Perloff’s “Avant-Garde Poetics” entry in the new fourth edition of the Princeton Encyclopedia of Poetry and Poetics.

Provided a pointer. (See Kenneth Goldsmith: “The new creativity is pointing, not making.”) Upshot? Nothing. The curious community-divesting ploy of feigned deafness propping up witless denial. “Or did they exclude it simply because they disagreed?” One rule of “The State of Poetry” is simply to maintain itself (somewhere in the unassailable “beyond”). “Not . . . the courtesy of a note . . .”

A measure of how accustomed “we” now are to kowtowing to “The State of Poetry” (its plenipotentiaries now likely to adhere to vaguely oppositional positions, belaureled in the moribundia). Out of Andrew Peart’s excellent review of the 2011 Dworkin / Goldsmith asset grab Against Expression: An Anthology of Conceptual Writing:

The paradox of conceptual writing is that its radical break with supposedly retrograde literary institutions needs authorization—not antagonism—from those institutions before it can become visible as literary practice in the ﬁrst place. Against Expression contains evidence everywhere of its roots in the academy. It is no secret that Marjorie Perloff and Charles Bernstein have played a signiﬁcant role in nurturing the reception of conceptual writing within the academy. Even so, the size of their presence in and around Against Expression is remarkable. Perloff is one of the volume’s dedicatees, and one of the general editors of the series in which the book appears, Northwestern University’s Avant-Garde and Modernism Collection. Meanwhile, Bernstein is one of only three core Language poets who appear in the anthology (Steve McCaffery and Ron Silliman are the other two); at twenty-ﬁve pages, his work ties Goldsmith’s for the largest portfolio in the volume. Bernstein’s name also opens the book jacket copy. Conceptual writing has come to name an insider’s game among writers ofﬁcially sanctioned by—and marketed by—prominent poetry critics . . .

Pointing, then, where the Harriet lackeys refuse to point, pretending a frankness and eclecticism they do not inhabitv (in spite of the parti-colored motley of their billowing “garb”). Out of the Johnson review:

As the saying goes, “poetry is ﬁfty years behind art,” and in terms of a presently near-complete recuperation into sanctioned activity, it did take approximately that long for American poetry’s vanguard elements to catch up.** Indeed, one can safely say that not since the era of the New Criticism has a poetic constellation—ex-Language writing, its “post-avant” offshoots, and hybrid satellites—found itself so solidly and successfully ensconced within the upper echelons of Academia. Its Ivy League-led coalition (Penn our new Kenyon) has “arrived” to the station of a loyal reform wing in the Ofﬁcial Verse Parliament, still trumpeting, if much more faintly now, its oppositional genealogy. Even the White House approves. We’ve traveled a long way and with great velocity from the proud, insurgent days of the New American Poetry, and it’s time to simply say it: the “avant-garde” is now utterly at College—poetry’s Museum—and with all the perks.

* Scuttlebutt’s got it that there were others who, too, wrote with news, pointing out both the pertinence and the verve of the Johnson piece.

In the case of the Conceptual Poetry formation (which Perloff industriously champions), the desire to be legitimated by dominant institutions is bluntly up front. The desire has been amply and variously requited. In January of this year, the Museum of Modern Art in NYC named Kenneth Goldsmith its ﬁrst ever “Poet Laureate.” Goldsmith quickly announced a series of “guerrilla readings” at the museum, in which writers such as Charles Bernstein and Rick Moody are signed up as apparently subversive participants. Goldsmith’s appointment is scheduled to be ofﬁcially launched on March 20 with a keynote address by him titled: “My Career in Poetry, or How I Learned to Stop Worrying and Love the Institution.”

† An hour or so after my post, Harriet, apparently noticing the inadequacy of garb, covered up. See here.
Posted by John Latta at 6:52 AM