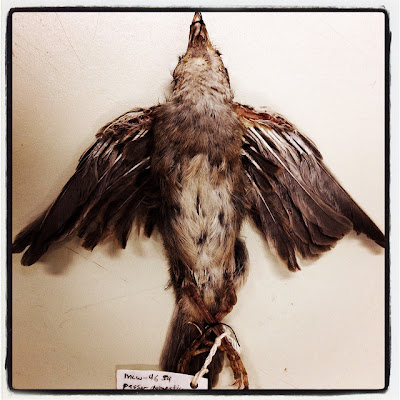 Sapped and distracted. What if I do a little housecleaning, dumping off a rat’s nest of stray pronuntiationes in a fever of splicing? (To droop untowardly indicates humility.) It’s odd to think of Marianne Moore quarrelling. She sees fit to belatedly bromide regarding it (out of The Dial: A Retropective”):

To some contributors—as to some non-contributors—The Dial and I in particular, may have seemed quarrelsome, and it is regrettable that manners should be subordinated to matter. Mishaps and anomalies, however, but served to emphasize for me the untoxic soundness of most writers. And today, previous victims of mine have to dread from me, as pre-empting the privilege of the last word, nothing more than solicitude that all of us may write better.

Likely right, though isn’t there something always a little smug about putting away one’s bad manners? (To behave decorously indicates a sensibility arriviste.) Thoreau’s talking about clothing made by the “factory system” when he notes that “the principal object is not that mankind may be well and honestly clad, but unquestionably, that corporations may be enriched.” So it goes, too, for solicitudinous non-aggravarians. Or, as Thoreau protested (to Daniel Ricketson, 18 August 1857) of nature-writer Wilson Flagg: “He is not alert enough. He wants stirring up with a pole. He should practice turning a series of somersets rapidly, or jump up and see how many times he can strike his feet together before coming down.” And:

His style, as I remember, is singularly vague . . . before I got to the end of the sentences, I was off the track. If you indulge in long periods, you must be sure to have a snapper at the end. As for style of writing, if one has anything to say, it drops from him simply and directly, as a stone falls to the ground. There are no two ways about it, but down it comes, and he may stick in the points and stops wherever he can get a chance. New ideas come into this world somewhat like falling meteors, with a flash and an explosion, and perhaps somebody’s castle roof perforated. To try to polish the stone in its descent, to give it a peculiar turn, and make it whistle a tune, perchance, would be of no use, if it were possible. Your polished stuff turns out not to be meteoric, but of this earth. However, there is plenty of time, and Nature is an admirable schoolmistress.

Par contre Flagg, who outlived Thoreau, called him “a poet, rather than a philosopher”:

The luminous medium through which he saw all things appertaining to nature incapacitated him for logical reasoning. He lived upon his intuitions. His style of writing was very simple, occasionally flashing with brilliant metaphors, which he rarely used, but which always came unsought, and were not elaborately nailed to his sentences, like pictures on a wall. His satire is inimitable, and he utters his paradoxes with such an air of inspiration that you admire them in spite of their absurdity. He saw visions and described them like a prophet, but they were unintelligible to men of the world. He saw truths, but they were for the imagination, not the reason. “I would,” he said, “rather sit on a pumpkin and have it all to myself, than be crowded on a velvet cushion. I would rather ride on earth in an ox-cart with a free circulation, than go to heaven in the fancy car of an excursion train and breathe a malaria all the way.”

Another route to that “untoxic soundness” the anomalies boast of. I think of Henry James’s remarks regarding Thoreau’s epigone John Burroughs (“a sort of reduced, but also more humorous, more available, and more sociable Thoreau”) : “He is . . . intimate with the question of apples, and he treats of it in a succulent disquisition which imparts to the somewhat trivial theme a kind of lyrical dignity. He remarks, justly, that women are poor apple-eaters.” (To contend “in sequent toil” indicates mere forwardness . . .)