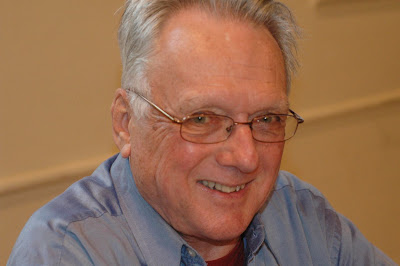 Somewhere George Stanley uses a line by Czesław Miłosz (out of “Reconciliation”) for an epigraph—“The poet: one who constantly thinks of something else.”

Stanley’s sense of the world’s distant ongoingness (somewhere beyond, colliding only briefly with one’s words, or, rarely, providing one with one’s words). Out of Vancouver: A Poem (New Star Books, 2008):

This is being written just after noon on September 22, 1999 — probably the last day of this gentle, warm late summer that followed a cold, rainy August. I’m perched on a welded steel stool leaning on the steel counter of a pomo coffee shop which I guess is called Trees Organic Coffee Co. (at least that’s what it says on my coffee cup — dark Sumatra coffee — the image — the image of the map — of Indonesia — from the Globe & Mail & the BBC on-line — in mind) — east side of Granville just north of Pender — this soft bright sunlight off the young maples on the Mall — light & shadow sharply delineated on the pavement — to right, Sinclair Centre — the old Post Office — where the 1938 demonstration / police riot still goes on, black-coated arm upraised coming down on the men running away escaping down the short flight of steps at the entrance on Hastings St., now Plaza Escada — dress shop — so are we (tuna sandwiches) now at lunch time seated at round tables with red & yellow chessboards on them & painted scalloped edges in two shades of green, behind a low ornamental steel railing — & people walking the Mall, two men stopping to talk between the potted plants, one wearing a madras jacket, hand on hip to indicate midmorning ennui — bicycles, buses . . . I really don’t know what I’m doing — this is not the world. It’s just my take. My lucky take. My sunny day September take.

After the focus and precision of the “take”: a toss-off and denial. A plunge back into. See, too: “And know that these words were so strong / I could live in the world they made. / But that I had made the words myself / to build a world — a world we could talk about, / using the words. To forget it was just raw longing / not to be alone.” (A few lines subsequent, Stanley posits being “better / off now, without any common language” and that “Words have to come out of the / world (like ‘gold ink’). There’s no good / flopping around like a fish . . .” I am entirely “took” by the dilemma. In “The Set”— out of A Tall, Serious Girl: Selected Poems, 1957-2000 (Qua Books, 2003)—Stanley talks of missing “That sense that there was a world & meaning / outside your mind.” And briefly becomes, late in the piece, “a steel ball in a Bally machine”—banging around like a pinball, such the vacillatory glee / want of the poet. Here’s the whole terrific thing:

Remembering how it felt
working on the Grape
in ’72, doing layout
in a grey former grocery
on Powell — we’d take a break
at suppertime & head for the pub,
knock back six or eight drafts,
a package or two of chips,
maybe a pickled sausage,
& tell the waiter,
“Take one for yourself.”

We were a part of history
in our mental spotlight, drinking beer
with trade unionists from the ’30s,
in that battered pub (soon to be closed,
renovated & turned into a fern bar).
They told us tales
of struggles of the past.

We’d troop back, half-lit
through snowy darkness or summer shadow
to that grey, dingy, dimly lit
former grocery, to finish our layout.
There was never enough liner
or blades for the X-Acto knives & the
typeset “corrections” always came late
from the Peak & had to be pasted
in by hand, but the beer in our heads
kept us going past midnight — also the link
with the old union guys — with the dirty ’30s —
we were for real — & we were dirty.

Do you miss all that? Do you miss the dirty ’70s?
That sense that there was a world & meaning
outside your mind? Tho sceptic Ed Dorn
said “the set,” you could account
not just for the world but for nature itself:
the trees that leafed in the spring on Powell St.,
the stars — for you thought,
why would there be stars if there were
no world for them to shine on?

& by the third or fourth draft
your hangover would lift
& there’d be the sacred streets, in long
purple & orange stripes of sunset
to the eternal horizon,

& you called yourself a cadre,
a little yeast cell, making
tiny, correct changes in people’s
consciousness, getting the paper out
on the streets. Miss all that?

I shot up to Rupert for no reason
like a steel ball in a Bally machine,
banging around the pink bumpers,
racking up point for god knows who or what.

I came almost to a stop, poised at the entrance
to one of those long, gently raked, steel alleys
you can roll down for years, decades, & still
be far from the flippers. Then I missed the world,
the beery romance of politics,
(the whiskey romance of poetry),
the set.

Fighting the romance, that “mental spotlight,” and succumbing. Is it the loss of that X-Acto knife’d world of print tangibles that makes the piece sting so sweetly? World interspliced with “set” so there’s no telling where the act ends and the work begins: a kind of definition of youth.

“Meaning outside your mind.” There’s Stanley talking (interviewed by Brook Houglum and Jenny Penberthy in excellent George Stanley issue of The Capilano Reiew) about “Aboutism”:

Aboutism was an idea framed as if it were a poetic movement. The manifesto is from Ryan Knighton: “Theory guards us from error; we are for error.”
Aboutism was a reaction to language poetry, and language poetry quite clearly eliminated reference. I think what the language poets were trying to do was similar to what the post-impressionists did in painting. That is, to make a painting not out of the images of the world, portraits, and landscapes and all that, but to make a painting out of paint. So that’s a lesson that one learns from Cézanne. So I think language poetry at a theoretical level, with a classic language poet like Clark Coolidge, was attempting to create an art form simply out of words abstracted from their signification. My sense of that immediately was “You can’t do that.” It’s not possible in language. In visual arts you can take shape and line and colour away from the world and make something new out of them that has nothing to do with any referential object. Abstraction. But you cannot separate a word from its signification. If you have the word “tiger” in a poem the image of a tiger will arise in your mind inevitably. It seems to me that even in the most austere language poets—like Deanna Ferguson or Clark Coolidge—there was always this sort of semantic haze around the poem of the meanings, of the significations that had been excluded but didn’t go away.

That lovely moment in Vancouver where Stanley admits: “I’ve been doing, no, writing, this so long — / nothing wrong.” And counters it with simple relief, that humble marvel of writing itself:

Now the words tell of something so obvious
as to see the air in front of you
but not to have known it was something
to see.

“Writing — to see what turns up, or to keep going.”