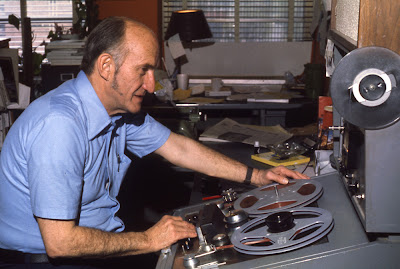 Heard—reported by radio, aptly enough—of the recent death of E. G. (Edwin Gladding) Burrows (b. 23 July 1917 in Dallas, Texas—d. 20 November 2011 in Edmonds, Washington). I say aptly because of Burrows’s long career in public broadcasting, work done, it seems, concurrent with an unstopped and nigh-constant attention to writing poetry. (I sense Burrows being prolific in the magazines, and skint by the books.) At Ithaca House, I printed Burrows’s The House of August (1985). Accuracy of seeing, curiosity bolstered by apprehending, particularity of diction, love of the natural world, game and wily enough to comprehend the ineradicability of human foibles. Other books include: The Arctic Tern and Other Poems (Grove Press, 1957)—finalist for the National Book Award, Man Fishing (Sumac, 1969), Kiva (Ithaca House, 1976). A nod here to a neglected. Three poems, dated roughly 1960, 2001, 2003:

Nicias to the Athenians

The sea’s on end, a scoured
plate on my mind’s mad edge,
red, with all the wrong ships.
I wash them with my sleeve
swabbing the grit of sails
from that bowl like a scrub-
woman, still their yards glint.

Where is my sister stood
in morning’s gold motion
motionless, held the cold
flat grape dish with its freight
of iced fruit toward my mouth?
Did I see her comb snarls
of sunlight from her hair?
The door closed while I slept,
the fruit grew plated beaks.
The sea is that dish, the sea
poison with tainted sails,
a shield scenic with war,
itself an act of war.
It is my mind that flows
from the blue tilted bowl.

The lie in wait for me
those ships like spit out seeds.
An ill sort, stabbed by stones
in the kidney, too long
camped among damp meadows,
I am devoid of zeal.
Eat of my body, plant
your teeth in me, anchors.
I have no taste, only
acidity of time.
I have the yellow flesh
of one fifteen years turned
over the war’s slow fire,
tough, unpalatable,
yet the first and last course
served up by demagogues.
I am the old morsel,
reliable raisin,
but when I am nibbled
to nothing, when the skin
is peeled back from the shrunk
comedy of my core,
who will nourish their war?

There are no soldiers here.
They have run together
like unfired rust and rose,
the one color valor
smudged on the ware of weeds.
Between the long door and
the sun my sister stood
holding their bodies’ shards
like dolls’ limbs in her hands,
wet with her sallow wine.

Athens, my mind runs down.
Trumpets whisper behind
the hill, the ships lean in.
Was it empire you saw
in a pot of wild doves,
dukedoms of Sicily,
docile and spice-odored
to the nostrils, heaving
the oracular dregs?
That scent is blown, that feast
consumed, and Athens ends
here in this outcountry
like a drop of blood on
the outstretched fingertip.
The world’s on end. Come, cup
of the cold sea, pour death.

I watched the nesting redstart
when we camped by Lake Winnepesaukee.
The tent pegs pulled out in soft soil.
Rain made pawprints on the canvas.

So much clings to the shoes,
the old shoes must be discarded,
but we’re fools to think that does it:
burning the scraps.

I listened for the rain at Mt. Monadnock,
for the barred owl on a tent peak
among scrub pines in Michigan.
I can hear my father stir

and the cot creak. The flap opens.
He goes out and never returns
though the coffee steams on the grill
and the redstart sings in the alders.

Two above me rattling
in agile dogfight hugely
exuberant I thought they were
small hawks they were kingfishers
this August the old pursuit
and nipping at heels joy
of the genially royal and tail-spinning.

There’s nothing I’d rather do:
whoop and holler and backtalk
over the banal marina
and boat dock above the pawky
rock doves and bawling gulls
on their outposts I am tired
of the dull wait or the brawling
over schools of the meek and tasteless.
I’d rather spar and peel off.
I’d rather rattle.