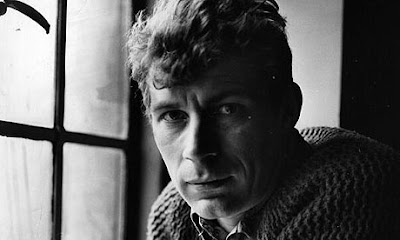 Early morning. Scuttling inveterate sleeplessness. (Sleeplessness, the longest single-vowelled word in English, I recall being instructed. And countered: what about Tennesseelessness, what Wallace Stevens captured in that jar? It shined like a firefly . . .) Tossed insomniac amongst fey slivers of sense. Thinking of some dire need to prod the spurious world with a pointed stick, to alleviate its surfeit and fulsomeness by means of a venting. Whence’d fly up countless black birds, or spout putty-colored geysers. The world pie. The meaning of gonflé. Stuffed up, full of itself, disallowing, by its tenor the vehicle of one’s doubt. John Berger, out of the 1958 novel A Painter of Our Time:

August 14
I should never have been a painter. Only the moral obligation to work makes me persist.

August 15
When ideas and actions are judged by their intention or sincerity instead of by their results, it is one of the paradoxes of human nature that confidence tricksters thrive. . . .
Anything is justified in art, but everything must be related. There is nothing that the painter need be forbidden to do. Nothing at all. But when he has finished, what he has done must be judged in relation to the always different and always present struggle of men to realize their potentiality more fully . . .

And, out of Bento’s Sketchbook:

One protests because not to protest would be too humiliating, too diminishing, to deadly. One protests (by building a barricade, taking up arms, going on a hunger strike, linking arms, shouting, writing) in order to save the present moment, whatever the future hold.
To protest is to refuse being reduced to a zero and to an enforced silence. Therefore, at the very moment a protest is made, if it is made, there is a small victory. The moment, although passing like every moment, acquires a certain indelibility. It passes, yet it has been printed out. A protest is not principally a sacrifice made for some alternative, more just future; it is an inconsequential redemption of the present. The problem is how to live time and again with the adjective inconsequential.

A statement that so thoroughly enunciates what writing (particularly writing here) means that I neglect to see how pertinent it is, too, to the nascent push of the occupying 99%. I think of Beckett’s sapped enunciation (in Proust) regarding “the poisonous ingenuity of Time” and how it indefatigably locates itself within the individual human being, who’s sapped—he, too—“in the haze of our smug will to live, of our pernicious and incurable optimism”:

Sense of menace residing in that “smug will to live”—as if mere volitive ongoingness suffied—is it that that allows one’s being “reduced to a zero.” Gonflé. Fey slivers of sense. Berger says: “People hold books in a special way—like they hold nothing else. They hold them not like inanimate things but like ones that have gone to sleep. Children often carry toys in the same manner.” My writing, my toy, my sleep. One continues out of a sense of necessary exacerbation. Roiling the moment, churning its liquors immiscible. Inconsequentially embedding in each daily “reach” what Barthes calls—seeing it contained in photographs—“this imperious sign of my future death.” Oof.