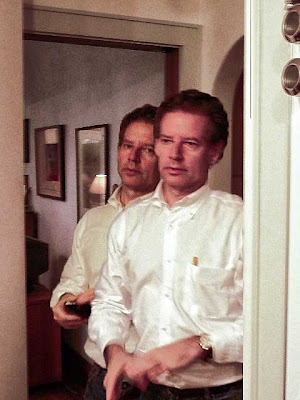 Pas grand chose. Thwarted by the routine chores of the day, its light slanting off southerly in a geometric splash of board-lengths, white with verges yellowing greasily. A proxy for color, drawing additives out of its surround, the way light seemingly caught in its purity usually does. Torn paper crows gusting through it, bound for town. A smallish rhumb line of sentence-making accrues in that “greasily.” A tagalong adverb crossing the meridian at an angle consistent to its imaginary precursors. One is the epigraph to J. H. Prynne’s 1997 piece For the Monogram. Out of editor Austin Farrer’s 1951 introduction to Leibniz’s Theodicy: “Why should the dog ever be displeased spontaneously?” (Leibniz is apparently making distinct the spontaneous and the voluntary: “many things occur in the mind, of itself, but not chosen by it.”) The second greasy “precursor” (because, nearly unbeknownst to me, I’d been aligning Prynne’s line with it all day), another doggish sentence (wagged by its adverbial tail), out of William Fuller’s Hallucination (Flood Editions, 2011): “A happy, inquisitive, spontaneous dog, eating hungrily.” Out of the lovely “For Dally Kimoko”:

Who forgets to perfect enjoyment flakes apart from the force of a will to fail. After which, claims encumber thought. They cause the phone to be handed to her, into which she speaks, then hands it to me, and I speak, then a voice speaks, then several voices speak, and a shadow breaks apart. To be valid, this episode must be imputed to those who are absent. But why be anxious? Why care about what else could be possible when the true goal involves having all our senses register every aspect of physical existence constantly and unremittingly? Such an attainment would fill up our hearts without resorting to paradox. Any estimated shortfall would still leave adequate amounts set aside to satisfy our need not to fluctuate. Even a dog knows this. A happy, inquisitive, spontaneous dog, eating hungrily. When in the future a kind of perpetual hum is heard, which grows louder as temperatures rise, strong hands will take command and clear light will darken us. At night a heavy body will be thrown against the floor and a tambourine will vibrate.

Reverie of a bodily attunement and presence functioning so completely and purely it thwarts the castigate tendency of the mind’s will. Is there a complicated math of desire’s irremediable shortfall here, though? If “all our senses register every aspect of physical existence constantly and unremittingly”—why the subsequent intrusion of doubt couched in the lingo of the banking primer: “Any estimated shortfall would still leave adequate amounts set aside to satisfy our need not to fluctuate”? Is that the impertinence and press of “claims,” their encumbrance seemingly a kind of second-guessing? Why the odd pointing to Africa—after the initial nod to soukous guitarist Dally Kimoko of the Congo, the palpable longing that “strong hands . . . take command and clear light . . . darken us,” the increasing heat, the hint of violence? Is it arguable that the piece itself “flakes apart” / “breaks apart” under the welter of its anxieties (thus viscerally enacting its willed argument)? Arriving here (my own buoyancy a little drubbed by the relentlessness of my queries, possibly opaque, or addled) I think of William Carlos Williams’s 5 August 1932 reply to Zukofsky, writing after receipt of An “Objectivists” Anthology:

’s a wonderful book, a distinguished object, and the preface is like the Bible for impressiveness and impenetrability—it’s a veritable glass miggle for slipperiness.

(Williams adds, rather stupefyingly, that “the most impressive feature of the whole is that it is a whole and like nothing else I have ever observed.” Williams seemed routinely to go marble-mouthed in any attempt to talk up the pleasures of Zukofsky’s work.)