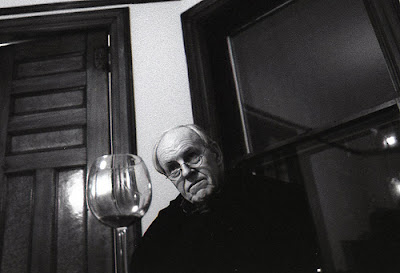 Rather stymied by the press of my own habits, their hegemony in the usual lurch. Cortázar: “The ego refuses to compromise, an eye devouring the world—without seeing it.” Reading, under the slender stalk-delivered cone of a clip-on light, J. H. Prynne, out of “Tips on Reading”:

When a reading of text has proceeded by laborious stages within the test-rig of detailed study, pause to allow the overall effect to integrate back into a coherent human reading, and ponder whether your life may even have been changed, just a little, or your beliefs about large questions; whether your habits of feeling have been flattered or boastfully challenged . . .

And thinking: the “test-rig” of my quotidian writing’s begun, merely, to flatter my habit. No pleasantly unreachable itch to it, no adrenalin-charge or massy onslaught of percept in the offing. (Cortázar: “I wonder whether it occurs to him to suddenly consider the absurd, as a comparison with the cosmic, whether he sometimes takes a step back so the monster in front of his eyes turns back into the fly hovering in the air. Techniques, nothing more. Baruch Spinoza, what a swine.”) You see: pure effect, a sleight of hand game, easily played. Longing for a dry hesitancy, an exactness to thwart the usual ready gush, a cursive mingling that is sere and serene. (Prynne, “A Gold Ring Called Reluctance”: “The private / recourse that might also reclaim the transfer / is our hesitancy. Whenever we / find our unwillingness a form on which to pause.”)

A couple of inches of cakey snow shoveled off the walk. Scrupulously—see Latin scrūpulus, diminutive of scrūpus, rough or hard pebble—a word Cicero put into lingo, uneasiness welling to a nub. Or anxiety weighing in. An intent to name and delineate the things of the world with prudence (contracted < prōvidēns < classical Latin prōvidēre, to foresee), though all such finicking be, possibly, futile, names being such monsters of uncertainty, and liable to become flies . . . Prynne, out of The White Stones (1969):

To set a name to it, hold them
down and ask merely
are they shouting, with both feet
planted and leaning towards me

the note forming no con-
sequence, they gulp the
landscape before them

Alert, to the name of an occasion
which is theirs as I take
it from them, the offered gift
met by the purest sound

I cannot hold this
it is a name: shouting
or leaning, on the single

earth which is below them, each one