“One Gap Against Another”

Immediacy, that indeterminant fons et origo. What sends the shuttlecock flying. The whoops of the titmouse in the yard. The book open’d at random to a page of William Bartram’s:

In planting and distributing the several parts of the Garden have care to appose one to another, as a wood to a Parterre or bowling green & not to place all the Wood on one side & the Parterre the other nor set a bowling green apossite a Bason for this would be one Gap against another which should allways be avoided, by setting a full against a void & the raised work against a flat to cause a contrast & variety       This diversity should be always kept in view in the general design as well as in each distinct piece.

The fluttering of the night reverie’s drapes being push’d belatedly open, tousling the sleeper who’s in the midst of some lingering prehensile identity reach, that of a mold-cover’d Roma tomato with a copper coin greenly oxidizing: “one Gap against another.” (One thinks, oddly, though consequently, of A. R. Ammon’s short poem call’d “Their Sex Life”:

One failure on
Top of another.

Nigh language writing-inflect’d that is, with its slight smarm at the resituating of an idiom. Is it in the roundabout precincts of avoidance—or in the ravening jut of excess and that one comes a cropper?) There’s, too—too?—Jean Frémon, talking about The Paradoxes of Robert Ryman: “Because poetry does not exist in some sort of poetic language, but in that which exceeds it. It is that which mysteriously remains—sometimes—when one is systematically striving to push away all that which resembles it.” (Sounding a little like that grog-pot adage of Robert Frost’s: “Poetry is what gets lost in translation.”) One strives to translate Ryman’s “painting without paint”—or its variant, “paint without painting”—into a demonstrable act of writing. Stuck with the continual defiant prosthesis of the word. The unprepossessing right failure of any attempt at intelligible wordlessness . . . I suppose, being one of the raffish and rife “tendency,” one in cahoots with the undiminish’d exfoliance of the rose, preterite of the gussy’d-up—I suppose a limit’d vocab, a spare nigh-cipher truncated vocables ought run counter to my “aim” (my aimlessness). Reading (lately, intermittently) Helen Carr’s The Verse Revolutionaries: Ezra Pound, H. D. and the Imagists the repeat’d calls (against the blowzy obfusc and plenarty of late Victoriana) for a stripping down. Here’s Rebecca West in 1913 in Dora Marsden’s The New Freewoman (predecessor of The Egoist), puffing the imagistes (and seeing Taylorism in Poundian efficiency):

Poetry should be burned to the bone by austere fires and washed white with rains of affliction: the poet should love nakedness and the thought of the skeleton under the flesh. But because the public will not pay for poetry it has become the occupation of learned persons, given to soft living among veiled things and unaccustomed to being sacked for talking too much. That is why from the beautiful stark bride of Blake it has become the idle hussy hung with ornament kept by Lord Tennyson . . . and now supported . . . by the Georgian school. But there has arisen a little band who desire the poet to be as disciplined and efficient at his job as the stevedore. Just as Taylor and Gilbreth want to introduce scientific management into industry so the imagistes want to discover the most puissant way of whirling the scattered star dust of words into a new star of passion . . .

West prints “poems written by Mr. Ezra Pound since he became an imagiste.” Including the wholly pertinent “Salutation”:

Is “we” there now? Is there flab again? Is the poetic body groaning under its imperial corpulence? I suspect so. One recalls the early (22 October 1912) letter to Harriet Monroe, hinting at the immorality of sloppy verbiage, how any lie is bad art. (And “we”: surround’d by lies.) Pound:

Until someone is honest we get nothing clear. The good work is obscured, hidden in the bad. I go about this London hunting for the real. I find paper after paper, person after person, mildly affirming the opinion of someone who hasn’t cared enough about the art to tell what he actually believes.
It’s only when a few men who know, get together and disagree that any sort of criticism is born . . . I can give you my honest opinion from the firing line, from “the inside.” I’m the kind of ass that believes in the public intelligence. I believe your “big business men” would rather hear a specialist’s opinion, even if it’s wrong, than hear a rumor, a dilutation. My own belief is that the public is sick of lukewarm praise of the mediocre . . .
It isn’t as if I were set in a groove. I read any number of masters, and recognize any number of kinds of excellence. But I’m sick to loathing of people who don’t care for the master-work, who set out as artists with no intention of producing it, who make no effort toward the best, who are content with publicity and the praise of reviewers. I think the worst betrayal you could make is to pretend for a moment that you are content with a parochial standard. You’re subsidized, you don’t have to placate the public at once . . .

That latter couple of sentences aim’d at Poetry, the magazine, and just as pertinent now as in 1912. Though I’d like to think the “you” of “the worst betrayal you could make is to pretend for a moment that you are content with a parochial standard” is aim’d, too, at “us.” Comfortably inured to a sensibility of excess, of “victory” acquired without exertion. Complacent with regard to shabby goods vaunt’d. At ungodly perennial ease with our own depredatory insouciance and publick deceits. 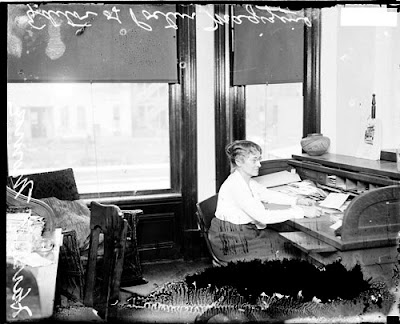