Temps trending “up.” The sodden green morn. Black night’s blasé patter diminish’d. Beckett, somewhere: “L’art adore les sauts”—sauts = “jumps, leaps.” The eye’s darting complicities, born of congenital skittishness: is it enough? I am stuck with “seeing”—how it mangles and discards, and hectors and connects. How it officiates the unstable zoom to write. How it is pull’d to see in mimickry what others see. (One bounce point: Stan Brakhage’s misquoting of Blake’s “We are led to Believe a Lie / When we see not Thro’ the Eye.” Brakhage puts a “with” in it—“see with not Thro’”—marking what? degree of percept or rampant habit of passivity?) Because I am reading Enrique Vila-Matas’s Never Any End to Paris (New Directions, 2011)—a text “about” irony both ruminant and giddy (Vila-Matas begins, with “Beams of Light” fix’d up against some Augury of the Ironic: “I went to Key West in Florida this year to enter the annual Ernest Hemingway look-alike contest”), I turn to the Julien Gracq quoted therein: “In the hunt for the exact word, there are two breeds: the trappers and the stalkers: Rimbaud and Mallarmé. The second group invariably has a higher percentage of successes, their yield might not bear comparison . . . but they never come back with live specimens.” Making distinct (distinctly parallel) a kind of earnest-obligatory seeing with (its tedium) and the wild-form pounce phenomena of seeing through. Isn’t that, too, partly what Pound’s getting at “with” the lines at the end of Canto LXXXI:

To have gathered from the air a live tradition
or from a fine old eye the unconquered flame
This is not vanity.
Here error is all in the not done,
all in the diffidence that faltered . . .

That “diffidence that faltered” following “to have done instead of not doing / this is not vanity” throws a roadblock up against any who’d claim Pound a “mere” Rimbaud: he’s working a fine modesty against overweening arrogance, history’s beckonings against the vanity of the specious new. (Ooof.) Is it—Rimbaud versus Mallarmé, diffidence versus jump, seeing “with” versus “through”—akin to George Perec’s “home” versus “everywhere”? Quoted, again, in Enrique Vila-Matas’s Never Any End to Paris (he calls it “being sedentary or a traveler” and “being a rank nationalist or a spiritual nomad”). Perec (originally out of Species of Spaces):

To put down roots, to rediscover or fashion your roots, to carve the place that will be yours out of space, and build, plant, appropriate, millimeter by millimeter, your “home”: to belong completely in your village, knowing you’re a true inhabitant of the Cévennes, or of Poitou.
Or else to own only the clothes you stand up in, to keep nothing, to live in hotels and change them frequently, and change towns, and change countries; to speak and read any one of four of five languages; to feel at home nowhere, but at ease almost everywhere.

(Beckett: “L’espace vous intéresse? Faisons-le craquer. / Le temps vous tracasse? Tuons-le tous ensemble.” Roughly: “Space concern you? Break it up. / Time got you worry’d? Kill it all together.”) Sweeping surveillance versus pinpointing, nabbing. Brakhage, in notes for a piece call’d “eyes” (1971)—“I was at last permitted to ride in a Pittsburgh Policecar, camera in hand”—out of Brakhage Scrapbook:

“Polis is eyes,” said Charles Olson, having found the archeological root of the word-end (thus beginning) of, say, “metropolis,” etc. “Police is a clear etymological derivative of ‘polis.’” . . .
The Police, then, are the public eyes; and they are, thus, expected to be Specialists of that ability-to-respond which most of the rest of the society has lost all Metro sense-of.

Sad state of it: all the looking / seeing left to les flics. So Paul Metcalf, in “I-57”—“57 is my spine, Sikeston to Chicago”—nabs a couple sentences of Charles Olson (talking with Gloucester neighbor Herbert Kenny): “I mean something I believe we possess crucially. I think our body is our soul. And if you don’t have your body in a factor of creation, you don’t have a soul.” Metcalf, one of the diffident ones, collage-capable of a jump. Olson continues, pertinently, about the “nature of perception, of attention”:

Which is a spiritual condition. You could put it, intensity. I mean, the amount of slackness today, the lackness, the limpness, is all in the fact that you don’t need attention any more, you don’t need your perceptions any more. It’s all taken care of for you by the environment of the automobile, your house, of the economy, of the money system. In fact there isn’t any money, there’s credit. In fact, it’s worse. I mean this is a crazy sort of a post-nature, post-natural thing that the species has gotten into . . . And I thought, and I still think, creation is crucial; and if you don’t stay close to it, you lose everything. That’s all, just everything.

Unplumb’d hesitancy of scrawl. That
Moment of thin-lipped poise
In advance of the broken
Earnest: ‘make each / Prescribe to
Other as each other’s leech.’
Thronging the grassy slough, sudden
The suck of particular: bob
Of sandhill, flush of reluctant
Rail. The precise way grief
Derails a giddy encumbrance, foisting
Off its niggardly conceit, the
Ink abrupt, unclotted and black.

The eye smarts up according
To its wont and through-
Put, or dulls down intelligibly
Blank. A dentist’s drill power’d
Off and hung up, frank
Steel pincer’d by fat fingers.
Cramp’d calligraphy of a solitary
Beetle’s traversal of the linoleum’d
Reaches. Sight is a dizzying
Uncongenial bricolage of brute innuendo
And helpless retrieval: propriety is
Its scat, seeing its song. 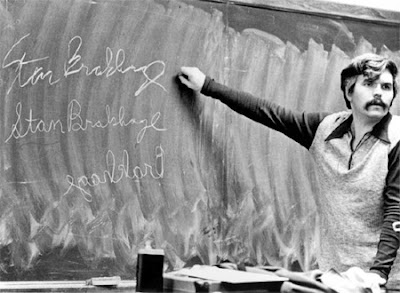 Two strips of “I Take These Truths,” the first part of Trilogy (1995), by Stan Brakhage