Extend’d peregrinatory “out and about” period. That kind of necessary (and mostly fallow) seizure. Unremitting dawdle. “The Sufi notion of having ‘one foot in the world, one foot out of it’—this would be a condition of authenticity—a way of mitigating one’s conditioning.” That out of memoir materiel writ by Rick London, found in Alastair Johnston’s excellent Zephyrus Image: A Bibliography (Poltroon Press, 2003). ZI = linotypist and printer Holbrook Teter and artist Michael Myers, with Tom Raworth and Ed Dorn riding shotgun, among others. Anarchic wit eclecticists. See Bob Callahan (of Turtle Island) recalling:

. . . we were all print freaks. There was this kind of sense of liking the smell of print. We were never happier than when we got back in the shop and had some goofy fucking prank to pull off. We lived for that moment—when things got that clear and we had to execute the prank as perfectly as the prank called for. There was always something lawful in the gesture that followed. It had a law of its own that it obeyed and we recognized. I remember them coming over frequently at 10:30 at night with the day’s harvest. It was almost like fishermen bringing in the catch. It was normal to have Holbrook walk through the door at 11 o’clock at night and we’d be giggling for a half hour and thinking, “OK, what does this mean? What’s next?” And it created a kind of comic language all to itself that dictated one production after another. It was always like our normal activity of getting out product—what we did for real—was publish books of poetry that had no future either. It was the straight side of what we did, and this other thing was a commentary on the absurdity of that.

Something to quash the earnest careerist funk that lingers all around the ’seventies Bay Area “scene”—result of Language writing’s own fastidious history occluding other, richer histories. Herein numerous signs, dug out of the daily ephemera— “ephemera” is “everyday life”—that people did not “totally regret life.” Raworth talks of a “total feeling of open mind (with Ed, Holbrook and Michael) . . . there needed to be not even the minutest break between thought and language—and even beyond language; gesture . . . a finger movement would communicate.” And London, of Holbrook Teter’s “insistence . . . in maintaining their project as a process of discovery, not presumption”: “authenticity, by definition, cannot be predicted: If something is prefabricated, it’s not authentic.” And, that: “authenticity . . . was related to the idea of poverty; you can’t claim to possess anything, not even yourself . . .” (O’Hara’s “you can't plan on the heart, but / the better part of it, my poetry, is open” an apt stickler here.)

Aimlessness under the glare of destiny (its lack) makes one number things. Thus (out of “The Numbering”—unrestrain’d seriality in a Poundian surrounding box):

A yellow slicker, a cut
Against a fiduciary earning neither
Here nor there. The main
Thing is ongoingness, with its
Pre-certify’d breaks and regimens,
Or those that blow up
Out of the hard yellow
Kernels of the fatidic musts.
Money, like rhetoric, is nothing
Beyond a specie of trust.
Current and inveigler for the
Many who line its banks.

‘If a man cannot say
What is wont in twelve
Lines—better leave it unsaid.’
Pound, sort of. The re-
Uptake inhibitor’s gone slushy, every
Inept grunt and common utterance
Is being record’d, every B
Movie’s agog with its empyrean,
Its murmur, its sweat. Empty
Yellow Valvoline containers bob up
Seriatim in waves: no more
Cudgel-wrought songs of yore.

The insubstantial ways of unbrief’d
Causality never mark’d the snow
I march’d along, indecorous fusilier
With a blunderbuss, a red
Canvas musette bag fill’d with
Trifles. Weather, temporary sovereign of
The heights, talk’d it up
With its own plaintive commissariat
Raw tedium, made a new
Agreement, and descend’d. Balm. We
Know not what we ought.
We ought not know it.

A few jigs. How the inspecific trundling off works to gainsay my perennial attending. As James Brown’d put it: “I got to get on the good foot.” 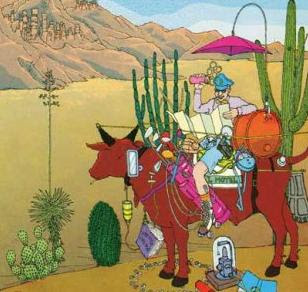