Magnolias hitting the skids, lilacs coming into “they” own. Lower’d sky like pie dough, edges crimp’d. Coldish. The bicycle’s unwobbling pivot stirring down into the sleep-reaches, pulling up its sludge, the gewgaws bobbing in its sludge. Pascal says: “It is almost impossible to feign love without turning into a lover.” The same for writing. What’s it mean “to feign writing”? Try scribbling a little and “before you know it” you’ll be writing. In Enrique Vila-Matas’s new Never Any End to Paris (New Directions, 2011)—whence the Pascal—Vila-Matas, riffing about “irony,” says: “Do you understand me when I say one says the most by not saying anything? ” With no irony: I do, and perfectly. Sudden is the need to refer to something—anything—“out there” in the world. The greasy magnolia petals, stain’d the color of rust, or shit. The wee impertinent screes of two starlings up in a willow. The taut intermittency of the keys being finger’d nigh-noiselessly. Looking at a book of artist manifestos: attract’d to the Stuckists sloganeering “Against conceptualism, hedonism and the cult of the ego-artist.” Contempt for celebrity cravings. Though the declaratory medium itself rather besmirches the intent. (Thinking of the “uncreative” cons of the Conceptualists: I like what Werner Herzog says—“Minnesota Declaration” (1999)—of cinéma-vérité, how “it reaches a merely superficial truth, the truth of accountants”: “There are deeper strata of truth in cinema, and there is such a thing as poetic, ecstatic truth. It is mysterious and elusive, and can be reached only through fabrication and imagination and stylization.”) I peek’d at that White House frou-frou roux with “Kenny” Goldsmith and “Billy” Collins—two wits closer in demeanor, delivery, and significance than either’d admit—and recall’d Nabokov’s Pnin at the “Cremona Women’s Club” (“Cremona—some two hundred versts west of Waindell”). All so mannerly and edifying and self-congratulatory. (“Abrupt barks of clockwork hilarity”—sign of impeccable behavior.) Nabokov:

“. . . Our next lecturer is the distinguished poet and prose writer, Miss Linda Lacefield. We all know she has written poetry, prose, and some short stories. Miss Lacefield was born in New York. Her ancestors on both sides fought on both sides in the Revolutionary War. She wrote her first poem before graduation. Many of her poems—three of them, at least—have been published in Response, A Hundred Love Lyrics by American Women. In 1922 she received the cash prize offered by—”

Frankly, between the repeating thuds of smarm and the duds of self-garnishment, I had to retreat. I prefer comrade Dadaist Aragon’s mysterious rebuttal. Between the dogged “Everything that is not me is incomprehensible” and the catty “Everything that is me is incomprehensible” he’s got the chutzpah to feign a little marvel of highly alert “not saying anything”: “Whether sought on Paciﬁc sands or gathered in the hinterland of my own existence, the shell that I press to my ear will ring with the same voice and I’ll think it the voice of the sea and it will be but the sound of myself.” And: “In my left pocket I carry a remarkably accurate self-portrait: a watch in burnished steel. It speaks, marks time and understands none of it.”

Like the constant lyric drone
Of a mufti’d apparatchik dying
In the sun, my home-
Grown terror is standard, poor,
An index of what bankruptcy
Is. The insect-runnel’d ash
Trees along the promenade, junk
In the street. What contingency
Makes of the heart’s blank
Reproof is no security. Out
We go mark’d by lack
Of purchase, fending off cops.

In the copybook two cows
Shaped like boxes: ‘where Ecstasy
Is making its Cunning in.’
A miscreant series of gashes
Renders the sky’s heresiarchy of
Clouds rather too perfectly considering . . .
Constituting naughts. Concomitant zeroing in
Of the heart against chaotic
Débâcle and foundering, the two
Cows of the era’s bleak
Ravening. Empire’s a spouse made
Of concrete. Endless interviews unyielding . . . 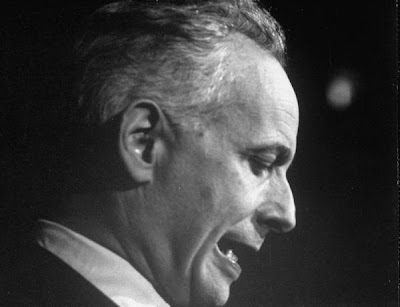