Spindrift or spendthrift? Against the clarity of the morning’s rose-breast’d grosbeak, operatic in a maple: a tizzy of misappropriation and tunelessness. Wrong songs. Inspecific tort and mayhem in the brain-box. Kind of thing makes one “turn to” books. “Live long thou happie tree, I say, / that on the brinck doth stand.” (Reading’s radical solace: the way it sops up the loose offal of the brain-pan, or, put differently, aligns the stray iron filings into discernible rows and curves of a right complexity . . .) Hendrix, mid-“Voodoo Child” at Woodstock, all mouth-gapery and clench, suddenly: “You can leave if you want to, we’re just jammin’ that’s all . . .” Or, out of “The Ten Thousand Things”:

. . . the eye / Extracts a progress from almost anything.
—John Ashbery

tolerable in its aqua ambush         cigarillo

unstinting Hoovering         took by the veriest

“the nacreous sands of the Guadalquiver”

Oh, one book sighs, “When cankred craftie Iuno came / with Venus (Nurce of Love) / And Pallas eke . . .” Eek, indeed. Looking at Pound’s early Chinoiserie, pre-Cathay, redoings of lines out of Herbert A. Giles’s A History of Chinese Literature (1901). How Pound took Giles’s version of a Han dynasty emperor Liu Ch’e (B.C. 156-87) piece, and made “Liu Ch’e”:

The rustling of the silk is discontinued,
Dust drifts over the court-yard,
There is no sound of foot-fall, and the leaves
Scurry into heaps and lie still,
And she the rejoicer of the heart is beneath them:

A wet leaf that clings to the threshold.

Isn’t there a gaffe there in that furry and familiar “scurry”? What kind of puppie is a leaf? Trouble reconciling the animal’d romp with that “wet leaf.” A question of unity: “an intellectual and emotional complex in an instant of time.” Complexity no apologia for antithesis. The Giles reads:

The sound of rustling silk is stilled,
With dust the marble courtyard filled;
No footfalls echo on the floor,
Fallen leaves in heaps block up the door. . . .
For she, my pride, my lovely one, is lost,
And I am left, in hopeless anguish tossed.

Is Pound’s “discontinued” mercantile and clumsy next to “stilled”? Is “rejoicer of the heart” a “dim lands of peace” (“natural object is always the adequate symbol”)? Isn’t Pound’s putting the “rejoicer” “beneath” the leaves slightly awkward, if not gruesome? Here’s Arthur Waley’s version—call’d “Li Fu-ren”—out of the 1918 One Hundred and Seventy Chinese Poems:

The sound of her silk skirt has stopped.
On the marble pavement dust grows.
Her empty room is cold and still.
Fallen leaves are piled against the doors.
Longing for that lovely lady
How can I bring my aching heart to rest?

Putting the leaves against the door, closed. (Pound’s “threshold” brings the door in, but the heaps of leaves seem nowhere near it: leaves “scurry” into corners, not doorways . . .) Waley’s “skirt” seems a nigh-mechanical thing, all that clip’d verbiage: “sound,” “silk,” “skirt,” “stopped.” Amy Lowell (apparently working with Florence Ayscough who explain’d the original “character by character) offer’d a version bizarrely call’d “To the Air: ‘The Fallen Leaves and the Plaintive Cicada’” in the 1921 Fir-Flower Tablets: Poems Translated from the Chinese:

There is no rustle of silken sleeves,
Dust gathers in the Jade Courtyard.
The empty houses are cold, still, without sound.
The leaves fall and lie upon the bars of doorway after doorway.
I long for the Most Beautiful One; how can I attain my desire?
Pain bursts my heart. There is no peace.

That ending is, one must admit, “Direct treatment of the ‘thing,’ whether subjective or objective”—if one considers feelings a “thing.” Compared to Pound’s veering off into the slant metaphorick’d particular. Rifling the Giles, wondering that Pound didn’t redo the piece Giles himself call’d “Amari Aliquid” ( medio de fonte leporum surgit amari aliquid quod in ipsis floribus angat (Lucretius) = “out of the center of a fountain of delights arises something bitter that chokes us in our flowering”) with its Poundian opening:

The autumn blast drives the white scud in the sky,
Leaves fade, and wild geese sweeping south meet the eye;
The scent of late flowers fills the soft air above,
My heart full of thoughts of the lady I love.
In the river the barges for revel-carouse
Are lined by white waves which break over their bows;
Their oarsmen keep time to the piping and drumming. . . .
Yet joy is naught
Alloyed by the thought
That youth slips away and that old age is coming.

Liu Ch’e apparently introduced copper coins to China. Too: “Greek music took the place of the old native art, and the calendar was scientifically reformed.” A Poundian sort. (“I didn’t mean to take up all your sweet time / I’ll give it right back one of these days . . .”) 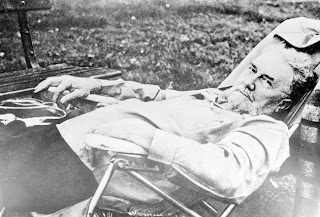 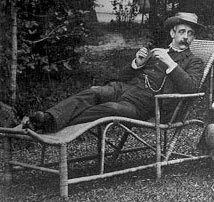