Emily Dickinson, addressing a bee: ‘Thou animated torrid-zone.’ The end of May, with its slatternly, incessant rains. A scattering of laggard spiræa petals eddy back against the run-off: ‘precocious boatmen’ or ‘a litter of women’s things.’ The partial re-rendering of a lost painting of an enormous orchid, fluttery white with a single modulating rose-color’d finger erect at its core. May so easily said, so unvarying, its permit perennial: ‘new and scant and crude.’ Is it Plotinus who talks of ‘the flight of the alone’? The solitary uncanny, fit beyond dithering. May’s rush so wolfish and determined into June’s trigger-load’d clampdown. During one late period rife with stupefying and sumptuous losses, including Emerson’s, he who’d ‘touched the secret Spring,’ Dickinson wrote: ‘The pussies dine on sherry now, and humming-bird cutlets.’

Against empire’s vain memorial to its own human loss, scrupulous in its incommensurability: scrappy outlandishness, horse-nonsense, and bunk. Braying factotum, wiener pierced by a stick. Vanity of the base human commitment to a thuggery of ‘us.’ Baton twirling girls high-kneeing it down Main. Fatty the pursed embouchures of the shrewd liars, the Æolus-flatterers harping for corporate gain. A sentimental gin-sop lapses gamely into prayer. A ‘common’ soldier with blood-color’d epaulettes rehearses a story made retail-ready by euphemism. Pure blood-urge of manufactured urgency. Prodding the vulgar to accept some particular of a priori ‘evil,’ some make-ready of the final real ‘impossible either to correct or analyze.’ Up in the aerial vault the chimney swifts teeter and sail and thieve. Two rabbits, dog-spook’d, freeze.

Extent of my practice. Mid-WWI (1916), H. D. writes: “The chief enemy is not the middle-classes and the Philistine upon whom the young men of the nineties whetted their wit. It is the great overwhelming mechanical daemon, the devil of machinery, of which we can hardly repeat too often, the war is the hideous offspring.” Translate that into the current “era,” its daemon of relentless pixil-delivery and “access.” Harriet Monroe’s Poetry offers (1917) a selection of “Aboriginal Poetry.” Carl Sandburg, commenting rather irascibly, notes: “Suspicion arises definitely that the Red Man and his children committed direct plagiarisms on the modern imagists and vorticists.” And offers some très-Cathay samples:

My Love Has Departed

A loon
I thought it was
But it was
My love’s
Splashing oar.

To Sault Ste. Marie
He has departed.
My love has gone on before me.
Never again can I see him.

And, a “Love Charm Song”: “What are you saying to me? / I am arrayed like the roses, / And beautiful as they.” Alice Corbin Henderson claims: “The Indian song often means more than it says; it is content to give the image and not to talk about it—it is not ‘journalistic.’” And: “The ethnologists . . . have overlooked the literary significance of the Indian songs; and the tendency of others has been to Europeanize both sentiment and form. A translation of an Indian song that reads like an Elizabethan lyric gives little idea of the original.” One recalls Eliot’s claim (1928) that label’d Pound the “inventor of Chinese poetry for our time” (adding, presciently, “This is as much as to say that Chinese poetry, as we know it today, is something invented by Ezra Pound. It is not to say that there is a Chinese poetry-in-itself, waiting for some ideal translator who shall be only translator.”) One senses a post-Imagistes shift in the period-style (not unlike the recent “hybridizing” foolishness, flatterers and lickspittles eager to declare some kind of debased loyalty . . .) Henderson writes elsewhere how “Nowadays everyone is writing imagist vers libre, or what the writers conceive as such, particularly those who at the beginning made the most outcry against it. Free verse is now accepted in good society, where rhymed verse is even considered a little shabby and old-fashioned.” Largely the work of “demon saleswoman” Amy Lowell. (Undoubtedly, each period-style gets rear’d up by—or stuck with—its “own” “demon saleswoman”: “These / Two things are one. (Pages of illustrations.)” The candidates are legion.) I find myself mystify’d by the pleasure of reading Alice Corbin Henderson’s “In The Desert”:

I
I have seen you, O king of the dead,
More beautiful than sunlight.

Your kiss is like quicksilver;
But I turned my face aside
Lest you should touch my lips.

In the field with the flowers
You stood darkly.

My knees trembled, and I knew
That no other joy would be like this.

But the warm field, and the sunlight,
And the few years of my girlhood
Came before me, and I cried,
Not yet!
Not yet, O dark lover!

You were patient.
—I know you will come again.

I have seen you, O king of the dead,
More beautiful than sunlight.


II
Here in the desert, under the cottonwoods
That keep up a monotonous wind-murmur of leaves,
I can hear the water dripping
Through the canals in Venice
From the oar of the gondola
Hugging the old palaces,
Beautiful old houses
Sinking quietly into decay. . . . .

O sunlight—how many things you gild
With your eternal gold!
Sunlight—and night—are everlasting.


III
Once every twenty-four hours
Earth has a moment of indecision:
Shall I go on?—
Shall I keep turning?—
Is it worth while?
Everything holds its breath.
The trees huddle anxiously
On the edge of the arroyo,
And then, with a tremendous heave,
Earth shoves the hours on towards dawn.


IV
Four o'clock in the afternoon.
A stream of money is flowing down Fifth Avenue.

They speak of the fascination of New York
Climbing aboard motor-busses to look down on the endless play
From the Bay to the Bronx.
But it is forever the same:
There is no life there.

Watching a cloud on the desert,
Endlessly watching small insects crawling in and out of the shadow of a cactus,
A herd-boy on the horizon driving goats,
Uninterrupted sky and blown sand:
Space—volume—silence
Nothing but life on the desert,
Intense life.


V
The hill cedars and piñons
Point upward like flames,
Like smoke they are drawn upward
From the face of the mountains.
Over the sunbaked slopes,
Patches of sun-dried adobes straggle;
Willows along the acequias in the valley
Give cool streams of green;
Beyond, on the bare hillsides,
Yellow and red gashes and bleached white paths
Give foothold to the burros,
To the black-shawled Mexican girls
Who go for water.

Is it contiguity or divinity, how it recalls lines in Marguerite Young’s Miss MacIntosh, My Darling, narrator Vera Cartwheel disorient’d aboard a Grey Goose bus, seeing “by the side of the road, a tall man with a child perched on his lean shoulders, a double-headed man, staring at nothingness or beyond it”:

There was now no landscape but the soul’s, and that is the inexactitude, the ever shifting and the distant. I would never know the man’s name . . . Yet he would remain forever engraved on memory’s whirling disc, the double-headed shape in curdled mist, as tantalizing as my ignorance of life. All my life I had been reaching for the tangible, and it had evaded me, much like the myth of Tantalus, much as if the tangible itself were an illusion. My life had been made up of just these disrelated, delusive images hovering only for a moment at the margin of consciousness, then passing . . . 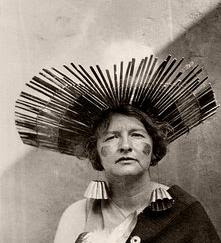