Skimpy the things hereabouts in the offing (to wring syntax for what it’s worth): I am fetter’d by “duteous visitacyon”—or something like that. After a weekend of hurry-scurry, one catches one’s “look”—like the most skiouros (shadow-tail’d, Greek) squirrel of all: feinting with its ass to block out the sudden glare of Monday’s sun. One ponderable: what to make of Williams’s (I’ll quote the whole thing) “11 / 1” “entry” (call’d “Introduction”) mid-revel in “The Descent of Winter,” the thing Williams’d begun on board the S. S. Pennland returning to the United States in 1927:

in almost all verse you read, mine or anybody’s else, the figures used and the general impression of the things spoken of is vague “you could say it better in prose” especially good prose, say the prose of Hemingway. The truth of the object is somehow hazed over, dulled. So nobody would go to see a play in verse if

the salvias, the rusty hydrangeas, the ragged
cannas

there’s too often no observation in it, in poetry. It is a soft second light of dreaming. The sagas were not like that, they seem to have been made on the spot. The little Greek I have read—and in translation—is not like that, Marlow, Chaucer, el Cid, Shakespeare where he is homely, uncultured, a shrewd guesser is not like that. Where he puts it over about some woman he knows or a prince or Falstaff. The good poetry is where the vividness comes up “true” like in prose but better. That’s poetry. Dante was wrestling with Italian, his vividness comes from his escape from Latin. Don Quixote. I don’t know about the Russians or the French.

poetry should strive for nothing else, this vividness alone, per se, for itself. The realization of this has its own internal fire that is “like” nothing. Therefore the bastardy of the simile. That thing, the vividness which is poetry by itself, makes the poem. There is no need to explain or compare. Make it and it is a poem. This is modern, not the saga. There are no sagas—only trees now, animals, engines: There’s that.

There’s that. Though, too, there’s the document refer’d to in The Correspondence of William Carlos Williams and Louis Zukofsky (2003), titled “The Book of Prosody,” or what (two pages) remains of it, sent to L. Z. in March of 1937:

As an example of the use of information in poetry as contrasted with prose, take the last movement of Zukowsky’s [sic] ‘A’ in which many statements and quotations are placed in juxtaposition one after the other for 41 pages in all: The writing of it is not put down for the literal meaning of the individual items or their particular truth (though it is understood that they must be true to be used) but for their sensual qualities—sensed at a stroke by the mind—not dwelt on as in a consecutive and developing prose discourse. in which meaning is supported on either side by its logical relationship to other meanings. So by repeated sensual impacts one after the other and using new materials each time a conviction is born that this and this and this being true and being related in meaning the truth of each one of them is separately affirmed. This is purely a sensual matter related to art. It has nothing to do with logic but arrives irresistably [sic] by conviction. It is interesting and depends on the obvious tactile acceptance of each item as true or made of the truth. And so each item must be very judiciously studied not to fly out of line by false emphasis or feeling but need only to be true: nothing must interfere with that or the whole structure will fall.
This has nothing to do with the value per se of the information imparted. That naturally is of primary importance. All that is touched upon above is the manner chosen for imparting that knowledge whether prose or poetry and if poetry how it has been in this case and what effect may be expected from such treatment.
A further definition of what is and what is not sensual is invited by the sort of material used. It should be noted that in this poem the principle of the simile is used rather than metaphor. What is being said is that all these things are alike and so each one gains in potential rather than direct meaning. This is the basic function of poetry, by use of form to impose a further meaning upon the literal significance. of the words So it seems that here by a thoroughly academic procedure modified to an enlarged use (the simile) an orthodox effect of poetry is obtained in a new way. Thus, the segments of information are to be understood to have a sensual quality rather than a logical one.
This is important for it again enlarges the poetic means—we see the same differently used in Pound’s Cantos where bits of “prose” are used among conventionally moulded poetic lines—Added to the usual use of figures, the rose, the melody we must perhaps add the idea but the idea treated as a sensual object.

—through metaphor to reconcile
(compose)
the people and the stones. Compose
(no ideas but in things)
invent!

Saxifrage is my flower, that splits
the rocks—
and harlequin and columbine.
Let the snake wait under
his weed

for flies and spiders and the writing
be of words,
slow and quick, sharp
to strike, quiet to wait
sleepless.

Whittled down and rearranged, of course, to:

Let the snake wait under
his weed
and the writing
be of words, slow and quick, sharp
to strike, quiet to wait,
sleepless.
—through metaphor to reconcile
the people and the stones.
Compose. (No ideas
but in things) Invent!
Saxifrage is my flower that splits
the rocks.

I write down all that out of “The Book of Prosody,” largely to see how Williams recants (mostly) the claim of simile’s “bastardy”—that untenable “no need to explain or compare.” What Williams is seeing is how Poundian juxtapositions can be apply’d to various units. The statement goes, too, a long ways, meseems, in showing just how derivative—and belated, some forty years later—the bumptious claims of Ron Silliman’s “The New Sentence” be. 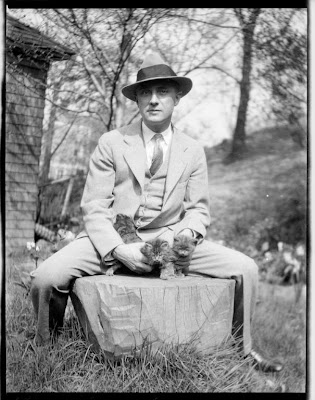