Mighty tiresome go the mid-’thirties Pound harangues to “Billyum Bullyums” (along with the orthographical bird talk—“Waaaal ole Wokunkus the Wombatt//” and cryptoid blanking—“Is a hoos defeated for leaving thistles for clover?”). (None of it is help’d by editor Hugh Witemeyer’s decision to sic “[sic]”s on seemingly each and every typographical inversion in lieu of merely silently correcting the obvious fautes. Too, the prodigious notes: surfeit and overkill—something I complain’d about with the Beckett letters lately, too—isn’t anybody reading a man’s letters likely to come to the job equip’d with a knowledge of milieu? Witemeyer exacerbates an onerous slog by combining footnotes a goodly number of repeat offender “Biographical Notes” append’d. I do, though, note Williams’s tough reply to Pound’s nagging him about some supposedly nativist form of sentimentality, connect’d—in Pound’s judgment box—to “soft spots etc/ in yr/ poems.” (The whole thing identical in some of its particulars to the gaseousness of, say, the New Yorker who sees the bulging midriff of the country—and its products—somehow not quite up to the iron-bent will and savvy for art.) Williams:

For the luv of God snap out of it. I’m no more sentimental about “murika” than Li Po was about China or Shakespeare about Yingland or any damned Frog about Paris. I know as well as you do that there’s nothing sacred about any land. But I also know (as you do also) that there’s no taboo effective against any land and wher I live is no more a “province” than I make it. To hell with youse. I ain’t trying to be an international figure. All I care about is to write.

And, admitting later: “writing the way I do, soft spots must occur. I cannot stop for them. . . . In the end I’ve got to get over the bad slips but I can only get over them by writing, chucking up the diamonds with the marl. If I didn’t do it this way I’d be hamstrung, nutted, sunk in two minutes.”

(Is it worth cribbing Pounds “Manifesto” title “The Functions of Criticism” in an age of meekness and sycophancy? Three points:

1. The best type of critic actually causes an improvement in the art he criticizes.

2. The next best critic is the one who most focuses attention on the best work.

3. The pestilence pretending to criticism distracts attention from the best work, either to work of secondary value or to tosh or even to wobbly essays on criticism.

Which is oddly flabby for Pound: “improvement”? O’Hara’s lines sing out like a reprimand: “you have to take your chances and try to avoid being logical . . . how then can you really care if anybody gets it, or gets what it means, or if it improves them. Improves them for what?” Did O’Hara ever cop to reading Pound? Is the remark that “the decision involved in the choice between ‘the nostalgia of the infinite’ and ‘the nostalgia for the infinite’ defines an attitude towards degree of abstraction” making a monkey of Pound’s dud “dim lands of peace”?)

Last night I jettison’d the Pound / Williams thing and hoist’d The Spirit of Romance. Immediately took by Pound’s self-proclaim’d “violation” of “one canon of modern prose” in the “Præfatio ad Lectorem Electum,” the making of a “florid and metaphorical comparison”:

Art is a fluid moving above or over the minds of men. . . . Art or an art is not unlike a river, in that it is perturbed at times by the quality of the river bed, but is in a way independent of that bed. The color of the water depends upon the substance of the bed and banks immediate and preceding. Stationary objects are reflected, but the quality of motion is of the river.

I am struck—reading Richard Sieburth’s short introduction to The Spirit of Romance wherein he quotes Dante’s De vulgari eloquentia—by how completely Pound’s metaphor mimicks a Dantean sense of vernacular language (and an Augustinian sense of God) in an image of a “mythical panther, whose fragrance hovers everywhere but whose presence lies nowhere.” Sieburth spells it out:

According to Dante, the three major vernacular Romance languages (French, Provençal, and Italian) constitute a single supra-national, supra-individual medium. Though they may differ locally (say, according to whether the word “yes” is pronounced oc, oïl, or si), their spirit remains the same (Dante notes that the word of “love,” namely amor, is significantly identical in all three). “Proper to no one city,” “the property of none,” “this single yet plural language of the Romance vernaculars is likened by Dante to “the mythical panther, whose fragrance hovers everywhere but whose presence lies nowhere.”

The whole, I note, fishing about, including the particular clumping of quotes out of De vulgari eloquentia, is highly dependent on Marianne Shapiro’s introduction to the 1990 De vulgari eloquentia: Dante’s book of exile. Rather essentialist thinking, not surprisingly, but with a fine finish and back-story to it. And not surprising that Pound’d cotton to a notion that strips away the local—he is, he announces, tired of “burdening himself with the rags of morphology, epigrraphy, privatleben and the kindred delights of the archaeological or ‘scholarly’ mind.” He’d just (1910) finish’d with the dogged particulars and philological trappings of “literachoor” in the American university. 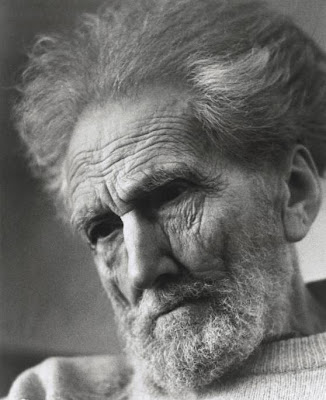