A translator primarily, not at all original—full of verbal felicities, one of the world’s outstanding word-men. Could sling a romantic cadence better than those he followed. Never knew a thing about Shakespeare except the “pure beauty” of a few lines. Never had the vaguest sense of what made S. go and wouldn’t have accepted it if he had known. In spite of which he’s a genius of the first water. His Seafarer, the translations from the Provençal, even from the German; the long early Canto translated from a Latin version of the Greek—superb work.
And there’s where we stick. “Beauty” to Pound is a very narrow thing, a cult and his words are the carefully selected words of a slender hand pointing minute points in a field of interest.

The book is concerned with beauty. . . . “Great poets,” Mr. Pound says, “seldom make bricks without straw. They pile up all the excellences they can beg, borrow, or steal from their predecessors and contemporaries, and then set their own inimitable light atop the mountain.” Of the Cantos, then, what is the master-quality? Scholastically, it is “concentrating the past on the present,” as T. S. Eliot says; rhetorically, it is certitude; musically, it is range with an unerring ear.

And—asking “are there no flaws? Does every passage in this symphony ‘relieve, refresh, revive the mind of the reader—at reasonable intervals—with some form of ecstasy, by some splendour of thought, some presentation of sheer beauty, some lightning turn of phrase’?” [Moore is quoting out of Pound’s own admonishing (“Good art never bores one”) in the “Præfatio ad Lectorem Electum” of The Spirit of Romance]—Moore points to Williams’s own recent review of the volume:

The “words affect modernity,” says William Carlos Williams, “with too much violence (at times)—a straining after slang effects . . . You cannot easily switch from Orteum to Peoria without violence (to the language). These images too greatly infest the Cantos.”

Which—finding odd—I look’d up the ellipsis. The argument, as Williams is making it, is concern’d not with the violent “infest” of the language of “Peoria”; it’s concern’d with “the principal move in imaginative writing today—that away from the word as a symbol toward the word as reality.” Williams:

1) His words affect modernity with too much violence (at times)—a straining after slang effects, engendered by their effort to escape that which is their instinctive quality, a taking character from classic similes and modes. You cannot easily switch from Orteum to Peoria without violence (to the language). These images too greatly infest the Cantos, the words cannot escape being colored by them: 2) so too the form of the phrase—it affects a modern turn but is really bent to a classical beauty of image, so that in effect it often (though not always) mars the normal accent of speech. But not always: sometimes it is superbly done and Pound is always trying to overcome the difficulty.

(Pound’s twice-quoting of Aubrey Beardsley’s “beauty is difficult” in The Cantos ought, henceforth, be shimmed-up with Williams’s counsel and reproof. If Moore manages a kind of bastardizing of Williams (to suit what I hate to say is a finicky comport—though she does write, with superb finick, “Unprudery is overemphasized”), I do like Moore’s sense of Pound’s “older-fashioned” view of women:

T. S. Eliot suspects Ezra Pound’s philosophy of being antiquated. William Carlos Williams finds his “versification still patterned after classic metres”; and, apropos of “feminolatry,” is not the view of woman expressed by the Cantos older-fashioned than that of Siam and Abyssinia? knowledge of the femaleness of chaos, of the octopus, of Our mulberry leaf, woman, appertaining more to Turkey than to a Roger Ascham?

I find the Roger Ascham remark mystifying—Ascham being he who wrote Toxophilus (“Lover of the Bow”), the first book (1545) on archery in English, a long-bow-happy professor of Greek and theorist of “the right order of teaching.” Ascham did, like Dante, tuck verily into the vernacular, noting—of the Latin-titled Toxophilusy—that he’d “written this Englishe matter in the Englishe tongue for Englishe men.” Moore is, évidemment, referring to Pound’s Canto XXIX:

. . . the second, the female
Is an element, the female
Is a chaos
An octopus
A biological process
and we seek to fulfill . . .
TAN AOIDAN, our desire, drift . . .
Ailas e que’m fau miey huelh
Quar no vezon so qu’ieu vuelh.
Our mulberry leaf, woman, TAN AOIDAN,
“Nel ventre tuo, o nella mente mia,
“Yes, Milady, precisely, if you wd.
have anything properly made.”

Which isn’t at all what I’d intend’d—scrabbling in the unlit continuum again this morning—my fetid thinking moiety caught betwixt lurch and slumber. I’d intend’d to grapple with Williams’s remark (to Zukofsky) earlier in the letter about “plowing different fields”:

If anything happened between us “years ago” for my part it was, if I remember anything at all—it was that I began to feel restless at your critical position, as I used to feel with Pound at times when he would press me too hard. I wanted to break away (probably from something inside myself) and felt, perhaps, that you represented certain critical restraints that acted as a check upon me. There is a certain meticulousness about your position that I respect, in you, but which doesn’t agree with my particular kind of irritability after the first ten years. I wanted to get off on the loose and see what a different sort of treatment would do for me. Something like that.

Williams’s propensity, routinely, to throw the whole thing over, to make some room for something different. Impatience with Zukofsky’s (excellently put) “certain meticulousness”—akin to Pound’s “beauty.” For Williams: beauty is nothing more than “what in a single object resolves our complex feelings of propriety.” Out of “Introduction to The Wedge” (1944):

Prose may carry a load of ill-defined matters like a ship. But poetry is the machine which drives it, pruned to a perfect economy. As in all machines its movement is intrinsic, undulant, a physical more than a literary character. In a poem this movement is distinguished in each case by the character of the speech from which it arises. Therefore each speech having its own character the poetry it engenders will be peculiar to that speech also in its own intrinsic form. The effect is beauty, what in a single object resolves our complex feelings of propriety. One doesn’t seek beauty. All that an artist or a Sperry can do is to drive toward his purpose, in the nature of his materials; not take gold where Babbitt metal is called for; to make: make clear the complexity of his perceptions in the medium given to him by inheritance, chance, accident or whatever it may be to work with according to his talents and the will that drives them. 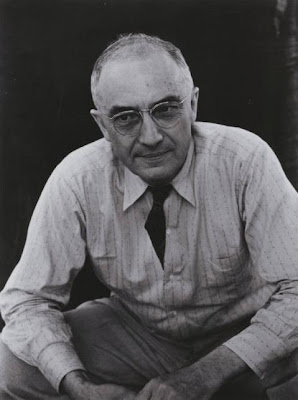