Inevitably, with the glut and variousness of the items rattling the judgment box, a fiasco’s in the making. Stephen Vincent recently alert’d me to the existence of the enormous book of watercolorist Charles Burchfield’s journals—edit’d by J. Benjamin Townsend, Charles Burchfield’s Journals: The Poetry of Place (1993). That made me dig out my copy of Charles Burchfield’s Seasons (1994) with its essay by Guy Davenport, something I’d neglect’d to read in my thumbing through the paintings. Davenport sees the journals, which “record fifty-six years of excursions and meditations”—those surviving “number ten thousand pages”—as nearly accomplish’d as the paintings: therein, “he takes his place among American writers.” He writes:

A thorough study of Burchfield will have the record of the journal as a resource for iconography and the artist’s theorizing. One must tread warily here: words are not paintings. Two orders of the imagination seem to lie parallel until we realize that Burchfield the writer is different from Burchfield the painter. They crisscross each other in ways that demonstrate the complex unity of this imagination. In 1916—in the first period of his visionary watercolors—he painted Ghost Plants (Corn and Sunflowers) (1916). Twenty-six years later, in 1942, he recorded a dream about a garden in which all the flowers were white (“huge sunflowers, the leaves and stalks pale gray green . . . gigantic white carnations . . . white gladiolas”). And in the dream was Shakespeare, who told Burchfield that these last were Crescent Moon gladiolas, “his special pride” (implying that Shakespeare was the gardener). The crescent moon itself was in this sweet dream, from which Burchfield awoke “with the smell of mignonette in [his] nostrils.” Shakespeare does not mention Crescent Moon gladiolas; they do not exist. 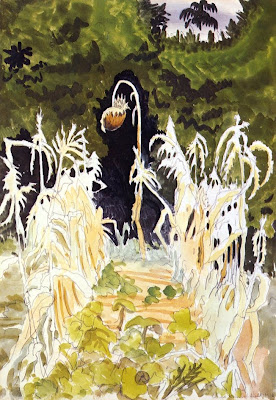 Davenport’s essay is oddly unfocus’d and in one detail, wrong. Of one painting, call’d Golden Dream (1959), he writes that it is “of an imaginary tree on which monarch butterflies hang, like blossoms.” A lovely idea, but even casual inspection of the work shows the butterflies to be a species of swallowtail. The corresponding lines out of the journal (dated, ten years earlier, July 14, 1949):

Countless butterflies sipping honey—the “butterfly dance” come true. Great tiger swallowtails (I counted them, never less than eight or more than 14). Monarchs, on[e] black swallowtail, & countless silver-spots, bees, and one hummingbird hawk-moth. Every so often the silverspots and more rarely the others would all fly up and chase each other furiously in small circles. The swallow-tails kept to themselves, usually at one end of the patch. Once I saw five on one plant. The odor of the flowers was too sweet to be borne long.

Two days earlier: “In the night, it suddenly came to me that a picture of countless butterflies dancing in hot sunlight would be worthwhile.” The Journals identifies the resulting piece as Butterfly Festival (1949-56). 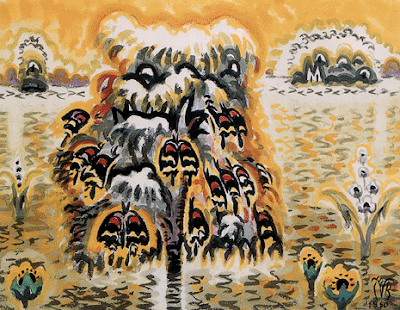 Burchfield’s journals full of insects, and insect noises. “Tinny pin-point cleeking of crickets.” He paints Cricket Chorus in the Arbor (1917) and The Insect Chorus (also 1917, a kind of annus mirabilis for Burchfield), and it’s as if he’s attempting to make a calligraphy of energy, or sound waves. (Of a later work, Oncoming Spring (1954), Davenport notes how “Subatomic particles had left their traces in physicists’ cloud chambers when this painting was done. Light under the scrutiny of Niels Bohr and Einstein had become a fifth element.”) And, after pointing to the paucity of identifiable influence for Burchfield’s early “original Expressionist manner”—“We can point to Van Gogh’s whorls of light around stars and to his writhing trees. We can remember Samuel Palmer and Blake”—suggests comic-strip techniques as another possible source:

In many paintings Burchfield uses cartoon-strip squiggles (agitrons, cartoonists call them) to indicate movement or vibrancy. From the cartoonist’s vocabulary he also took squeans and blurgits to indicate shafts of sunlight and sounds of crickets.

He’s right, though I half suspect Davenport of showing off a little, trotting out some terms he’d probably cobb’d off Hugh Kenner, who wrote a book about legendary animator and cartoon artist Chuck Jones (1912-2002), inventor of Pepe LePew, the Road Runner, and Wile E. Coyote. 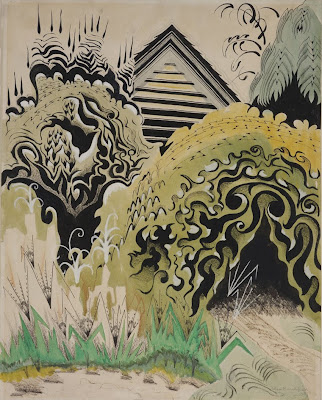 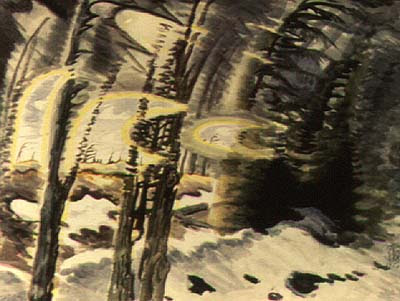 All at once the air became musical with the quavering cry of bluebirds. Looking up I beheld a scattering flock flying north. Some of them settled in the trees around me. The males had lost most of their blue. I noticed male & female pursued each other at times. That cry is a remote one and seems born out of the wind. It is one of the first spring notes. When we first hear it we are in doubt. Looking skyward we see nothing. It seems like a lost voice. Heard at this season it still [seems] a vagrancy of the wind. It was as if the wind had found a voice of its own, tired of using the trees, reeds & grasses as its vocal chords, and was timidly trying it out, half afraid of its own temerity.

p.m. to Gowanda Hills—sketching—
After eating, I put my cap under my head and stretched out on the ground. The warm sun was delicious & warmed me till I became drowsy & lay half-asleep. I amused myself by half opening my eyes and stealing a look at the distant hills, which look blue-white to my eyes. Then I discovered that my left eye saw everything yellow and my right blue. The contrast was so vivid that I wondered that I never saw it before. Then I wondered if it was the sun. My right eye was turned sun-ward. So I reversed my position, and lay a while and then experimented. The blue & yellow were just reversed now.

When I look at the sketch I worked on Saturday& yesterday, and note how I achieved a certain sort of freedom in it, former nature studies seem inhibited; and even this one is perhaps a little too self-contained—I think, oh, when [over “My God” erased] will I ever really let myself go and express the tremendous force of nature, or will I die at last without having done so? But the vital force must be within me.
I like to think of myself—as an artist—as being in a nondescript swamp, alone, up to my knees in mire, painting the vital beauty I see there, in my own way, not caring a damn about tradition, or anyone’s opinion.

The path to mediocrity, which so many writers and artists travel, is not hard to trace—An artist’s first taste of potential success and fame comes from work that has grown out of his daily life and the environment in which he grew up. With the financial returns from this initial success, he immediately leaves (and rejects) the very things that gave his work its originality & character, and establishes himself in some place near to New York, Paris or Rome.
From then on he produces work that has little or no character—and wide-eyed, he wonders what has happened. He has successfully escaped from what he deemed uncongenial surroundings, but has left his art behind him.

Okay, avoid’d the other hobble-gobble (Arnaut Daniel, Dante, O’Hara). For tomorrow (though there’ll undoubtedly be “new items” in the interval). 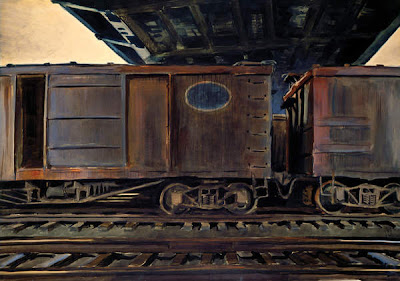 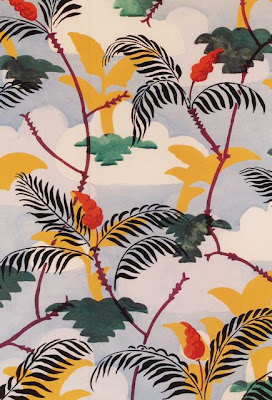 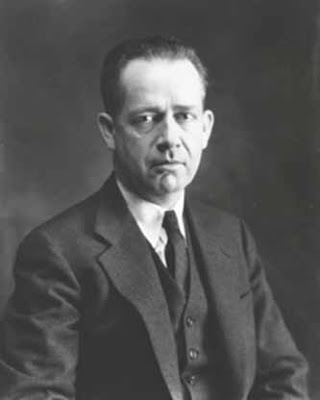