Odd it is to find myself so implacably without the duty (or, damnably or blessedly, calling?) of the “A Year” daily production schedule. Though, truth is, I spent (am spending) some days filling a couple of dozen “gaps”—some existing in an execrable hand in a tiny notebook, some only in the form of a couple of notes, some, upchuck of taciturnity, not at all. Do I nudge these strays into the shape of structural clothespins capable of holding the whole baggy “apparatus” up? No, I do not. My sense of the shape of the thing: larval, inchoate, diffident, a series containing series, onslaughts of mere ongoingness punctuated by daily detritus. Like life! (Ignoring, for the nonce, the Hejinian-thief’d epigraph: “Form subjugates every experience.”) One big smeary piece of evidence of my diviner’s refusal to do more than grab the prongs of the witch hazel stick and amble aimlessly about the yard (or “field”). An intent to “return” now to properly tiny—and titled, how I’ve miss’d titles!—lyrics, those little carts dragged forth by god-sent drivers—titles arrive unbeckon’d like a slough—verbiage beckoning to verbiage.

Reading (without writing, without making notes, without the rangy impetus—or impertinence—of the “community input” in the form of viddying the daily blog-rushes, that trapline I usually walk, snowshoe’d and carrying my jar of spoil’d squirrel meat for bait)—reading, it carouses, quickens around a thing, lags and retreats. Did I pursue Daniel Tiffany’s Infidel Poetics with all good intent? No, I did not. I dawdled with the Pound / Williams letters. WCW’s remark concerning Henry Adams—“much of what he said is . . . pure style: never to be understood”—plunged me off into Mont-Saint-Michel and Chartres with its argument (amongst others) that the words and idioms of mediaeval French (Molz pelerins qui vunt al Munt / Enquierent molt e grant dreit unt / Comment l’igliese fut fundee / Premierement et estoree) are “more English than French”:

Any one who attacks them boldly will find that the ‘vers romieus’ run along like a ballad, singing their own meaning, and troubling themselves very little whether the meaning is exact or not. One’s translation is sure to be full of gross blunders, but the supreme blunder is that of translating at all when one is trying to catch not a fact but a feeling. If translate one must, we had best begin by trying to be literal, under protest that it matters not a straw whether we succeed. Twelfth-century art was not precise; still less ‘précieuse,’ like Moliere’s famous seventeenth-century prudes.

Which is brashly put and invigorating even today. As is:

Simple human beings like rhyme better than prose, though both may say the same thing, as they like a curved line better than a straight one, or a blue better than a grey; but, apart from the sensual appetite, they chose rhyme in creating their literature for the practical reason that they remembered it better than prose. Men had to carry their libraries in their heads.

I begin to wonder, reading that, if Guy Davenport didn’t learn something about prose styling off Adams. Mid-read, pitch’d by something (say Li buef les vaches vunt muant, meaning “The beeves and the cows go mooing”) off the Adams only to land among Lola and Yunior and Oscar himself in Junot Díaz’s The Brief Wondrous Life of Oscar Wao (2007). Díaz capable of a beauteous rubbishy demotic transcripting worthy of Pynchon, plus the novel proceeds with a historical complexity hardly hint’d at in the reviews I gander’d. A chance bookshop perusal got me skimming the Mediterranean traceries of Odysseus in Ernle Bradford’s 1963 Ulysses Found. It plausibly argues for locating the voyages recount’d in The Odyssey in a mappable geography of the Mediterranean, is writ with a sailor’s eye and acumen. Bradford:

I spent most of the years between 1950 and 1960 sailing the Mediterranean, the largest vessel I owned being an old 20-ton cutter and the smallest a 7-ton sloop. For one period of two-and-a-half-years while sailing in the central and eastern Mediterranean I only slept ashore on five nights. I grew to know this sea, and in doing so I also grew to know the Odyssey almost as thoroughly as the charts that led me through the Messina strait, or across the Ionian to the islands and to Ithaca. In the course of my wandering I came to a number of conclusions about Homeric geography and the navigations of Ulysses.

Too, compleat’d Brian Lynch’s novel of mad scribe of devotionals William Cowper call’d The Winner of Sorrow (Dalkey Archive, 2009), a brilliantly writ piece of work. Of it, Lynch—also a filmmaker—writes (the ploy is Bergmanesque):

Works of visual art are used throughout the book, mainly, but not always, to set scenes . . . Some works are inventions: the illustrated letter by William Blake is plainly so; Mrs Unwin running toward Weston Hall at night brandishing a knife is also invented, after the manner of the great Portuguese painter Paula Rego. Many of the images are anachronistic: for instance, the giraffe that weeps in Holborn is based on a painting by the 20th century Georgian primitive Pirosmani.

The Winner of Sorrow is a novel, not a biography. The extent of the fiction may be exemplified by Susanna Unwin’s attribution of the neologism ‘unusuality’ to a tax-gatherer in Huntingdon, though it is actually the coinage of Mr Charlie McCreevy, until 2004 Minister for Finance in the Irish government.

Of that illustrated Blake letter, written to Lynch’s Cowper “in the first dark days of the new century”:

The most of the letter was filled with a drawing of a robed and frowning ancient with a forked beard, like two woolly triangles blown sideways by the wind, all done in rust-brown inks and washes of watercolour. The writing, forming an arch, ran around the image with a large, confident awkward childishness. It said,

Thou art the Son of Albion in the Evening of his Decay. I know this, Dear Sir, but dost thou? I see You Alone have creeped into the Bosom of the Abraham limned Here and Hid There. Oh! would that could follow thee! But I met with Mr Hayley and he said you were afraid. Why are you afraid? You are hid where No One Other dares go and therefore are Not an Electrical Machine, which is Hayley’s Mental Downfall, or a Steam Engine in a Mill, which is England’s fate, and besides, in your refuge of Madness, which is Poetic Health, which is to see as the Risen One does, you are Free from Isaac Newton. I am, Sir, Your Friend in Milton,

This man, Cowper thought, is obviously a revolutionary, or an agent for theggovernment , or a plain lunatic, or all thre ; and he hid the letter in an old copy of The Monthly Review. 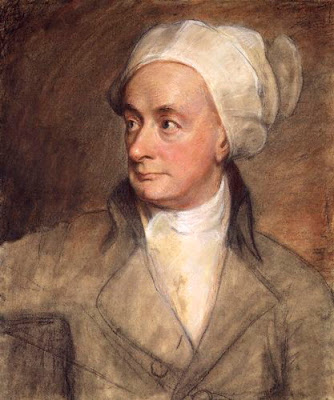 Tony Towle, expert student of all things O’Haraesque, responding to my recent remarks about David Schubert, report’d the following gem:

The tone of the opening of Frank O’Hara’s 1959 “To the Film Industry in Crisis” is virtually identical, it seems to me, to that of David Schubert’s “The Happy Traveller.” Frank’s poem to Schubert was written three years later but I think the above-mentioned similarity indicates that he knew Schubert’s work well before that. In 1964, Frank strongly urged me to pick up a copy of Initial A, readily available then, which I am happy to say I did. I didn’t notice this parallel, however, until it was too late to ask Frank about it.

Not you, lean quarterlies and swarthy periodicals
with your studious incursions toward the pomposity of ants,
nor you, experimental theatre in which Emotive Fruition
is wedding Poetic Insight perpetually, nor you,
promenading Grand Opera, obvious as an ear (though you
are close to my heart), but you, Motion Picture Industry,
it’s you I love!

Farewell, O zinnias, tall as teetotalers,
And thou, proud petunias, pastel windows of joy,
Also to you, noble tree trunks, by name
Elm, with your dark bark in the dark rain, couchant
Like comfortable elephants. And you
Mailbox colored robin’s egg blue on the poor
House, shy, set back (a poor gentleman but
Irreproachable), with your shutters robin’s egg
Green. You, street, striated with rain like a new penny,
And houses planted by arbor-vitae trees,
By miniature pines that lean against you for
Support—Hail and farewell!

Project: locate where and when “The Happy Traveller” first appear’d. Buoy’d by Towle’s report, I scanned Initial A and O’Hara’s Collected for signs. And imagined I’d glean’d another parallel in O’Hara’s opening lines out of “Two Variations” (dated February 1953):

Isn’t that, I convinced myself, reminiscent of Schubert’s opening to “Victor Record Catalog”?:

Most unexpectedly it happens, just
As you don’t know what you say till you
Say it. Sleighbells in the winter of
My discontent.

Or is it equally likely that one, or both, echo Archibald MacLeish’s “The End of the World” (“Quite unexpectedly, as Vasserot / The armless ambidextrian was lighting / A match between his great and second toe . . .”) with its “black pall / Of nothing, nothing, nothing—nothing at all.” Ah, the iterations of self-doubt on the heels of earnest procedure. As T. S. Eliot puts it—in “Fragment of an Agon”—“Hoo / Hoo / Hoo”—though who’s to say that Eliot wasn’t, as all of us must, merely fighting with himself? 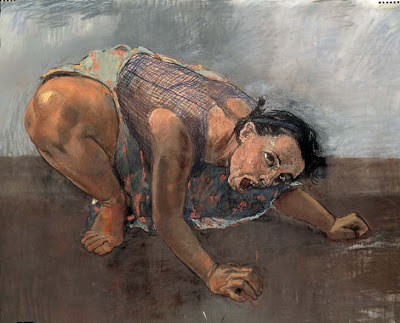 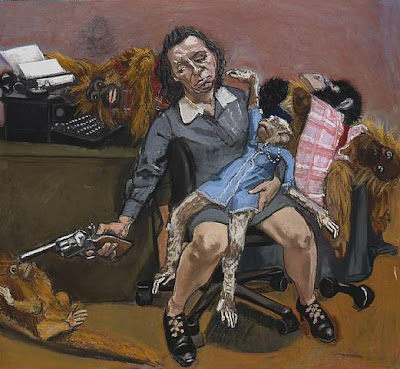 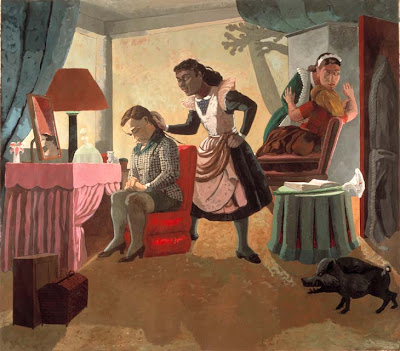