A Tree (With Crosses)

That the writing (every writing) merely awaits its unveiling, its dig archeologickal. Coleridge’s stray remark (in the Notebooks): “Unmask the goblin Verse that frights the Page.” And follow’d directly by the odd couplet:

As if some tender brushwork in the millennial sand, some dainty tapping of the rock pick and easy leveraging with the pry bar might out the boney carcass perfectly preserved. In my peregrinchings amongst the toss’d up Mooresqueries, I tumble into the 1964 Festschrift for Marianne Moore’s Seventy Seventh Birthday, “by various hands,” edit’d by Tambimuttu (being one Meary James Thurairajah Tambimuttu, Tamil poet and founder of Poetry London—later Poetry London-New York—call’d by Ben Sonnenberg a “brown-skinned, longhaired . . . bohemian, verbose and skinny.”) And find Marguerite Young’s lovely recollect of “An Afternoon with Marianne Moore (1946)”:

She is one of the poets who have done the most to preserve the English language as a way of new, intoxicating speech, but she has asked me not to say that her work is wonderful. Her work, she says, is a congeries of errors—and I remember that, in one of her poems, she speaks of “life’s faulty excellence,” for which reason I will accept her definition of her art. Life, too, I will agree, is a congeries of errors, is nothing perfect. A great value of her poetry is that it takes us very close to our prime sensational experience which we are likely to gloss over with generalities. She gets us back to the fluctuation of the particular.
Marianne Moore is a woman with a narrow head and pale blue eyes which seem to gather all the light into them. She is so unfashionable that she seems extremely fashionable. She speaks in quick, enigmatic sentences which strip away the flesh of thought and leave the bones bare and shining, so that suddenly you feel that you are seeing into the secret heart of things. You are mistaken, however, for soon you realize a further complexity—there is no secret heart, no simple solution but another problem, fastidious and strange. This is the atmosphere of her speech as of her poetry, which seems only the organization of her speech—the preservative of many fleeting moments.

And, talking of Moore’s mother’s symbiotic critical acumen (“they do not believe in using the large, loose words which mean nothing”):

Their most common speech, in which they transact the business of daily prosaic life, is as imagistic as if it had been plucked from a poem, a flight of the imagination. Not long ago, they both had colds and were afraid of infecting other people—until Mrs. Moore said, “Let us have done with the umbrella of our contagion.” Then there was the occasion when Marianne Moore found, in a box of strawberries, a flat, green, disc-shaped strawberry with its seeds sticking out. It was almost all seeds and no strawberry. “Here’s a strawberry that’s had quite a struggle,” she said—and wrote one of her most beautiful poems with that image in mind.

The poem is “Nevertheless” (version out of A Marianne Moore Reader (1961)—Moore’s legions of revisions act to keep the work in flux):

you’ve seen a strawberry
that’s had a struggle; yet
was, where the segments met,

a hedgehog or a star-
fish for the multitude
of seeds. What better food

harm the roots; they still grow
in frozen ground. Once where
there was a prickly-pear-

leaf clinging to barbed wire,
a root shot down to grow
in earth two feet below;

as carrots from mandrakes
or a ram’s-horn root some-
times. Victory won't come

to me unless I go
to it; a grape-tendril
ties a knot in knots till

The weak overcomes its
menace, the strong over-
comes itself. What is there

like fortitude! What sap
went through that little thread
to make the cherry red!

Succeeding by intrepid meander and entrenchment to “lock in” a sense cornuous and unfurling simultaneously: the veriest vital sap exposing itself with a blush! Young calls Moore “our characteristic American poet . . . a true pioneer in a wilderness of thought” (“Out of the chaos of our fragmentary impressions interrupting each other, which is the first form of our experience, she traces an order determined in part by feeling, and in part by exigency”) and writes:

In our age, as in perhaps every age since the invention of the printing press, there is a preponderant cult of mediocrity. Perhaps we can not get rid of it, but I object to its being labelled American. When a book is very, very dull or cheap—“This is good, old American” the advertising testimonials say. Considering that our most characteristic philosophers, poets, and fiction-writers have often explored the most exotic channels, I wonder why the dull should be called the good, old American way? America has been, if anything, the land of crazy unreason, where all kinds of people have done, as a matter of course, the most impossible things. So why should American literature be falsely described as something less experimental than America is? It seems unreasonable.

Greil Marcus’s “old, weird America” avant la lettre.Too, in Tambimuttu’s volume, of the woman who wrote somewhere (marvelously, and slyly) of writing that, “we would do well not to forget that it is an expedient for making oneself understood and that what is said should at least have the air of having meant something to the person who wrote it,” one finds the neglect’d American miniaturist and epigrammatist James Laughlin:

gloomed Cohen as the
Yankees lost the 7th

game I can’t wait for
next year and then as

if to double his mis-
ery told me the sorry

tale of Ruskin burning
all of Turner’s nudes

A snapshot (or two) with no preamble, in medias res. 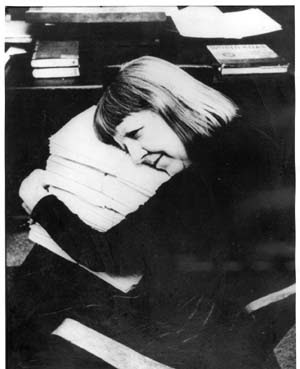 Marguerite Young, with compleat’d manuscript of Miss MacIntosh, My Darling