Dear William,
The catnip that art is, or ignis fatuus, or drop on the cactus, does seem worth the martyrdom of pursuit, I feel. If the value is valuable enough to one, one achieves it. So bless the collective wheelbarrow; with Wallace Stevens beside it like a Chinese beside a huge pair of oxen; also “Birds and Flowers”—the one instance, to my mind, of a love poem where the message would stand some chance of advancing the motive.
“His writing has been about evenly divided between prose and verse.” I wish I had said it.

Referring to Wallace Stevens’s accompanying piece titled “Williams” (Premier paragraph: “The slightly tobaccoy odor of autumn is perceptible in these pages. Williams is past fifty.”) Some of it (after labeling Williams “a romantic poet,” and adding “This will horrify him”:

The man has spent his life in rejecting the accepted sense of things. In that, most of all, his romantic temperament appears. But it is not enough merely to reject: what matters is the reason for rejection. The reason is that Williams has a romantic of his own. His strong spirit makes its own demands and delights to try its strength.
. . . In order to understand Williams at all, it is necessary to say at once that he has a sentimental side. . . . Sentiment has such an abhorrent name that one hesitates. But if what vitalizes Williams has an abhorrent name, its obviously generative function in his case may help to change its reputation. What Williams gives, on the whole, is not sentiment but the reaction from sentiment, or, rather, a little sentiment, very little, together with acute reaction.
His passion for the anti-poetic is a blood passion and not a passion of the inkpot. The anti-poetic is his spirit’s cure. He needs it as a naked man needs shelter or as an animal needs salt. To a man with a sentimental side the anti-poetic is that truth, that reality to which all of us are forever fleeing.
The anti-poetic has many aspects. The aspect to which a poet is addicted is a test of his validity. Its merely rhetorical aspect is valueless. As an affectation it is a commonplace. As a scourge it has a little more meaning. But as a phase of a man’s spirit, as a source of salvation, now, in the midst of a baffled generation, as one looks out of the window at Rutherford or Passaic, or as one walks the streets of New York, the anti-poetic acquires an extraordinary potency, especially if one’s nature possesses that side so attractive to the Furies.
Something of the unreal is necessary to fecundate the real; something of the sentimental is necessary to fecundate the anti-poetic. William, by nature, is more of a realist that is commonly true in the case of a poet. . . .

And how not apply Stevens’s remarks on “the anti-poetic” (“Its merely rhetorical aspect is valueless. As an affectation it is a commonplace.”)—to our own Flarf-gewgaw’d “era”? Everywhere that warning: against the mechanical, against mere “organization”—procedure only for its own loud presumptuousness, its noisy self-assertings. In Williams’s 1932 piece call’d “Marianne Moore,” he writes “Work such as Miss Moore’s holds its bloom today not by using slang, not by its moral abandon or puritanical steadfastness, but by the aesthetic pleasure engendered where pure craftsmanship joins hard surfaces skillfully.” And:

. . . to organize into a pattern is also, true enough, to “approach the conditions of a ritual.” But here I would again go slow. I see only escape from the conditions of ritual in Miss Moore’s work: a rush through wind if not toward some patent “end” at least away from pursuit, a pursuit perhaps by ritual. If from such a flight a ritual results it is more the care of those who follow than of the one who leads. “Ritual,” too often to suit my ear, connotes a stereotyped mode of procedure from which pleasure has passed, whereas the poetry to which my attention clings, if it ever knew those conditions, is distinguished only as it leaves them behind.

So one skirts (or gathers in one’s skirt) the old warnings, unblinking. Moore, herself, in “Feeling and Precision”—a piece capable of producing a nitrous oxide-fuel’d giddiness in me—says: “Fear of insufficiency is synonymous with insufficiency and fear of incorrectness makes for rigidity. Indeed, any concern about how well one’s work is going to be received seems to mildew effectiveness.” And “excess is the common substitute for energy.”

So saith the wraith, battling through a week of interrupt and (trop de) gab. (I managed, I swear, to thumb two pages of some old newspaper column about Foucault (“Do not ask who I am and do not ask me to remain the same. More than one person, doubtless like me, writes in order to have no face”) before dropping down into the Lethean sub-clarity of the “drop on the cactus,” that discourse vortex. In lieu of exposing the “rapports de force” (or the Marxist “rapports de production”)—the cagey-matrices of power relations—I found myself busy propping up a study of “rapports de rapports.” Carryings back. Carrying’s back. Bah. 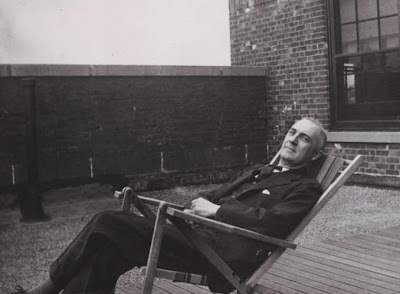