James Rosenquist (out of Painting Below Zero: Notes on a Life in Art):

I once titled a painting Time Flowers in which the word flowers functioned both as a noun and as a verb. The flowers were colored tenpenny nails arranged in groups of five, the way prisoners mark time on the walls of their cells. The title of Talking, Flower Ideas works the same way. A painting is a kind of time machine. It has to have two almost contradictory qualities. It’s essential that the painting communicate its energy and intensity to the person looking at it instantly, while at the same time it has to have elements that only become apparent after you have looked at the painting for a while. 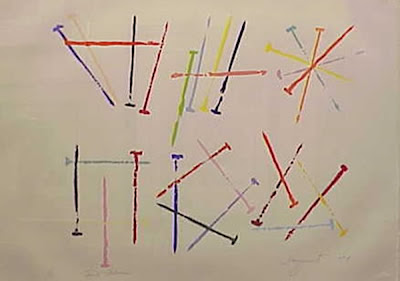 Frank Stella said something interesting about the split-second nature of art. He said that the baseball player Ted Williams was the quintessential modern artist because of his fast eye—Williams claimed he could see the seams on a baseball as it came over the plate at ninety miles an hour. I want that instant punch when you look at one of my paintings, too—the immediacy of an ad or a billboard—but at the same time I want you to be able to read things in my painting as they slowly rise to the surface. I’m often impressed by seeing something obliquely. That way I won’t get tangled up with its meaning to the point that I forget the very thing that originally enticed me. I’ll take it in in that initial flashing way, and then I’ll take the time to look deeper.

Painter’s way of keeping oneself “just a little stupid” (meaning “fresh, attending”). Hook’d—car radio, scooting across the dying industrial corner of Indiana—by Rosenquist’s gruff affability and easy (self-deflecting) laugh. Check’d out the book. Grew up in the Depression, shiftless (“nomadic”) aviator parents. “The Midwest is a strange place.” “One evening I was sitting on the front porch at sunset with the sun in back of me, and I seemed to see a giant Trojan horse walking across the horizon.” (“Turned out it was the neighbor’s stallion that had gotten loose and, caught against the setting sun, it loomed as a giant that looked four stories high.”) (Recalling—somewhere in Pynchon, the mountain in the Berkshires where one, catching the final green sliver of sundown, throws a shadow all the way into Connecticut.) Or: “In 1938, when we were living in Minnesota, a meteor landed on a neighbor’s house a few miles away and struck a woman on her hip while she was in bed—and she lived.” Or, story of a cousin who’d “been in the battalion that liberated Buchenwald”: “he told me they had used one room there as a latrine. He said he mistook a moonbeam for a piece of toilet paper on the latrine floor and tired to pick it up. ‘Damn, have you ever tried to wipe your ass with a moonbeam?’ I later made a print based on this image titled Moon Beam Mistaken for the News.” 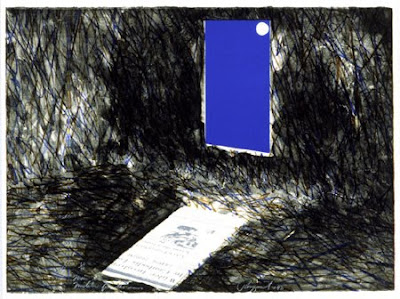 Rosenquist train’d as a billboard painter. (“being made to paint big advertisements in Times Square. If it didn’t look good, you’d get fired in two seconds flat. One time I was painting a billboard for the movie The Defiant Ones, in which Tony Curtis and Sidney Poitier are two prisoners, a white guy and a black guy, escaping from jail. I remember the workmen carrying big images of the movie billboard out of the shop. Tony Curt and Sidney Poitier were in chains, they were grabbing each other’s chains so they could run, but it looked like they were grabbing each other’s balls. So the boss says, ‘We can’t let that go up like that with those two guys grabbin’ each other’s dicks! Rosenquist! Change that!’”) Aesthetics roots (memory) in collage:

While we were living in Ohio, my mother took me at a museum in Dayton, where I first encountered the enigma of collage, something I would spend my life trying to unravel. There, all on the same wall, was a painting, a shrunken head, and a little flower: three completely different things that seemed to have nothing to do with one another.
People always mention Kurt Schwitters when they think of collage, but it goes much further back than that, way back to the Japanese tea ceremony. When you look at a collage by Schwitters, with disparate things stuck side by side and laid on top of each other—a newspaper, a train ticket, paper money, a torn piece of blue paper, a fashion illustration, an envelope with a stamp on it—you involuntarily make connections. With collage you are free to create your own narrative. That and an element of mystery is what originally attracted me to the process.

Collage as a variable ceremony of placement. 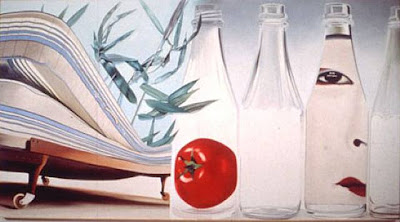 “What’s going on in Terrarium is a lot more subtle and elusive. The bottles containing the tomato and the woman’s face allude to an ancient Japanese paradox. Your favorite pet climbs into your antique vase and he starts growing in there without your noticing it. All of a sudden, you realize what’s happened. What do you do? Break the vase and save your pet? Or . . .? It’s an unanswerable riddle. The face in a bottle is like your love in a jar . . . what do you do with it? The tomato probably represents the woman, and you have to smash the bottle to keep the tomato or just let the tomato rot. You take your favorite thing and you strangle it. The woman-in-the-bottle riddle. So, it’s a pun, a visual koan with a twist.” 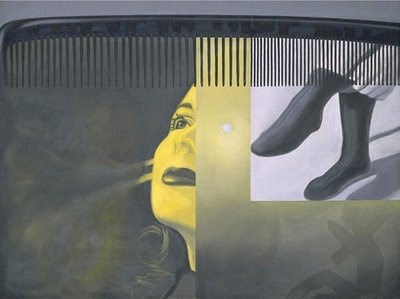 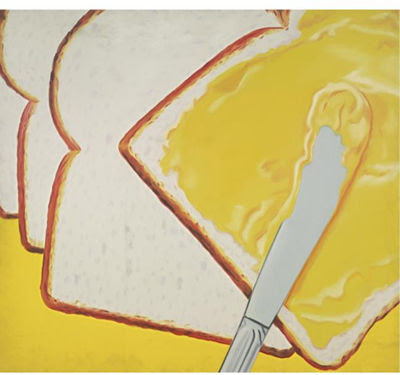 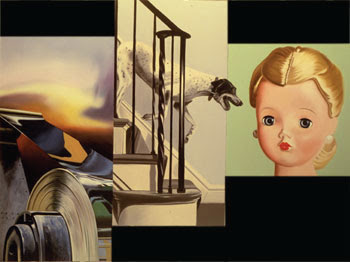 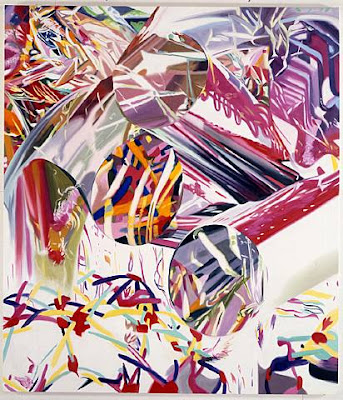