Skunk in the morning breeze. Shot in through the crow-infest’d pre-dawn (Ford Madox Ford saying how Pound’d read a thing by Arnaut Daniel: “The only part of that albade that you would understand would be the refrain: ‘Ah me, the darn, the darn it comes toe sune’”—Ford memory-wanking “Ah God! Ah God! That dawn should come so soon!” out of P.’s “Alba Innominata.”) Bicycling through cold after a spell of not. (Reading, again, with desultory impulse set to high, the newish Moody biography of Pound. Thinking of how Moody posits Ford as “complement and corrective of Yeats” (“even songs for the psaltery needed to have a prose ground under them”—that interminable war between earth-pull’d speech and the soaring heavenly illimitables, some’d say gaseousness, of the writ)—and quotes P.’s Pisan Cantos retrospect:

Ford’s conversation was better,
consisting in res non verba,
despite William’s anecdotes, in that Fordie
never dented an idea for a phrase’s sake
and had more humanitas

It is he [Ford] who has insisted, in the face of a still Victorian press, upon the importance of good writing as opposed to the opalescent word, the rhetorical tradition. Stendhal had said, and Flaubert, de Maupassant and Turgenev had proved, that “prose was the higher art”—at least their prose.

In “Ford Madox (Hueffer) Ford: Obit” Pound recalls how Ford “held that French clarity and simplicity in the writing of English verse and prose were of immense importance as in contrast to the use of a stilted traditional dialect, a “language of verse” unused in the actual talk of the people . . . for the expression of reality and emotion.” (Leading to the repeat’d famous incident of Ford’s floor-rolling hystericks at Pound’s decidedly “literary” effusions in Canzoni:

And he felt the errors of contemporary style to the point of rolling (physically, and if you look at it as a mere superficial snob, ridiculously) on the floor of his temporary quarters in Giessen, when my third volume displayed me trapped, fly-papered, gummed and strapped down in a jejune provincial effort to learn, mehercule, the stilted language that then passed for “good English.” . . . And that roll saved me at least two years, perhaps more. It sent me back to my own proper effort, namely toward using the living tongue (with younger men after me), though none of us has found a more natural language than Ford did.

Which puts one where? Here in the slog-color’d sun of mid-winter, wondering where the music’s going (meaning: in our “era”). No era’s flab-rhetoric matches that of any other era’s: just core-sample a single word, say, “torque” of a decade or so back. Rampantly rhetorical and imprecise: equivalent to a bushy beard-and-moustache stick-on item. How’d we get to “I HATE SPEECH”? Is Language writing “literary”? Is post-Language writing / “hybridity” the equivalent of “Georgian poetry”—with its malign’d volumes of the slack, the manner’d, the accessible? “I” don’t “know.”

Moving the desultory knob up a notch. Sneaking in something out of Olson’s Poetry and Truth under cover of le mot juste, what Olson might’ve call’d “the whole shot, shoot.” That line that Olson plucks out of—hell, who knows, Avicenna? Confucius? “the word . . . in Chinese is that word which I would like to avoid mentioning, but it rhymes with the man . . . to whom that is attributed”? (Olson’s verbiage’d up monkey-shines allow the veriest plethora of “points of purchase”—often equal to none.) Is le mot juste traceable in what Olson calls “Avicenna’s queer, short whatever it is”? Olson:

I said I wanted to talk about the orb, the urb, the image, and the anima mundi, and that it was all to be done under this apothegm or epigram, epigraph. . . . “That which exists through itself . . . That which exists through itself, is what is called meaning.” Too much! I mean it’s too much for me to stand here and just have that. And that is what I have to offer. And that’s what I think there is to offer, and I don’t think anything in this world moves it a jot, except as we do, or become such. “That which exists through itself is what is called meaning.” And even that word meaning is, I think, very—I’m reading from a translation of the Chinese . . . the word, of course, in Chinese is that word which I would like to avoid mentioning, but it rhymes with the man who also, to whom that is attributed. And we have that word in our language as ‘how,’ if you get my string of rhymes.

I don’t. Nevertheless, there’s an uneasy pleasure in observing the uncoiling of Olson’s tetch’d-earnest fretting:

And in my stubborn ruse way, I would like to read it again, so that we can summarize, hopefully, the week. It has the title, “*Added to making a Republic in gloom on Watchhouse Point”—which is simply where I live, it’s called such, it’s part of Fort Point, Fort Square, Gloucester, Massachusetts:

an actual earth of value to
construct one, from rhythm to
image, and image is knowing, and
knowing, Confucius says, brings one
to the goal: nothing is possible without
doing it. It is where the test lies, malgre
all the thought and all the pell-mell of
proposing it. Or thinking it out or living it
ahead of time.

—and it has that margin, “Reading about my world, March 6th, 1968.”
Now, it wasn’t Confucius, of course, that—right? It wasn’t, as you, if you—I mean ‘how’ does not rhyme with ‘Confucius.’ I mean, there’s—I didn’t even figure this out that night. I thought I’d read this whole damn thing to you and come up like a living exegesis and make it work so that you understood every word. It’s only about 29 pages this, and it’s really impeccable. It’s more like immaculate. And completely penetrable. Completely penetrable to your mind, to your life, to your thought, to your feelings—and I think only those things will actually produce results, result. That’s why I have pressed you, or harried you, harried you so hard, I think—is that there isn’t any way out of that. I think that that statement, that almost, apparently, a truism—as much as Confucius says, “nothing is possible without doing it”—there isn’t any way out of that, it’s like a—no matter what we may think—a pliers of typology, or not of typology, but of what I’m saying is the blow upon the world.

Blow is right. Olson veers off into a butchering of Williams’s “The stain of love / Is upon the world” (Olson: “‘Love is a stain upon the world.’ Or ‘is the stain,’ is it not?—‘is the stain upon the world.’ Any of you correct me in that, or confirm me on that? William Carlos Williams, ‘Love is the stain upon the world’—I think he opens a poem or something with.”) One moves and keeps moving, elbow cock’d, fist clutching the pencil stub. O’Hara (“Adieu to Norman, Bonjour to Joan and Jean-Paul”): “. . . it is good to be several floors up in the dead of night / wondering whether you are any good or not / and the only decision you can make is that you did it . . . the only thing to do is simply continue / is that simple / yes, it is simple because it is the only thing to do / can you do it / yes, you can because it is the only thing to do / blue light over the Bois de Boulogne it continues / the Seine continues / the Louvre stays open it continues it hardly closes at all. . .” 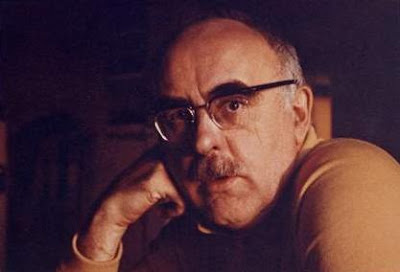