Synthesis audibly sounding its
loss number-cruncher Pan
indiscernibly up a tree
in with the greeny.

Stupendous pensivity a ghastly
contagion hoots the suburbs
o most High follow’d
by a gappy rigidity.

Jordan Davis, in a rather rambling essay / review of some recent (and less recent) collections of poetry in translation, “Exchange Rate” at Boston Review, an essay that seems to adopt the curiously imperialist premise that a flood of translation’s good for U. S. writing mostly for offering up a new market to thieve (see particularly the apparent straight-facedly made observation following a quote of Alexei Parshchikov’s “The Road”—“Perhaps there is nothing to steal in Parshchikov’s poem . . .”) Is it that underlying premise that makes the resort to proscription look so, uh, imperious?

There is more to poetry than sensation and mystification, or, if you prefer, reason and piety, form and content, jouissance and restraint.

That more is progression, whether it takes the form of narrative, a turn of argument or some other type of modulation not merely a change of subject (devotees of parataxis, this means you). I and other readers are responding more and more to work that develops beyond the accretion of modernist shocks and postmodernist jokes; even cascades of luminous details have come to seem less and less sufficient.

“This means you”? Sorry, were you talking to me? Isn’t this simply “reason and piety” itself, writ large? It’s entirely odd that it ought to spring so sprightly out of the mouth of a FlarfCo® chum, though “we”’ve seen exactly such double-speak before, usually play’d out under the unfurl’d banner of equanimity, or impartiality. One way of despoiling the muffin and keeping it too. (I am suddenly remind’d of O’Hara’s lines out of “Romanze, or The Music Students”:

In Ann Arbor on Sunday afternoon
at four-thirty they went to an organ
recital: Messiaen, Hindemith, Czerny.
And in their ears a great voice said
“To have great music we must commission
it. To commission great music
we must have great commissioners.”
There was a blast! and summer was over.

Basta the pronunciamento.) What becomes clear in Davis’s piece is that the dismissal of “shocks” and “jokes,” the declared insufficiency of “luminous details,” the call for a return to a “turn” (verse!) is camouflage to a moralizing (not to say “scolding”) impulse. Look at how he touts Brecht, and for what:

More valuable than the finenesses, though, is the combination of Brecht’s winningly rakish persona, his confident shaping of each work’s beginning, middle, and end (not necessarily in that order), and above all the sense that literature is commerce between adults who think well enough of themselves and others. Sanity, in other words.

Straight out of Keys to Success manuals: winning, confident, commerce-savvy, sane, allow’d a rakish “persona.” Brecht as “Dress Down Friday” meister. “Adults who think well enough of themselves and others,” precisely the kind of conventional morality that’d subsume “literature” under the vacant Sunday homily. O’Hara again (“Memorial Day 1950”):

Picasso made me tough and quick, and the world;
just as in a minute plane trees are knocked down
outside my window by a crew of creators.
Once he got his axe going everyone was upset
enough to fight for the last ditch and heap
of rubbish.
. . .
How many trees and frying pans
I loved and lost! Guernica hollered look out!
but we were all busy hoping our eyes were talking
to Paul Klee. My mother and father asked me and
I told them from my tight blue pants we should
love only the stones, the sea, and heroic figures.
Wasted child! I’ll club you on the shins! I
wasn’t surprised when the older people entered
my cheap hotel room and broke my guitar and my can
of blue paint.
. . .
And those of us who thought poetry
was crap were throttled by Auden or Rimbaud
when, sent by some compulsive Juno, we tried
to play with collages or sprechstimme in their bed.
Poetry didn’t tell me not to play with toys
but alone I could never have figured out that dolls
meant death.
Our responsibilities did not begin
in dream, though they began in bed. Love is first of all
a lesson in utility. I hear the sewage singing
underneath my bright white toilet seat and know
that somewhere sometime it will reach the sea;
gulls and swordfishes will find it richer than a river . . . Something to assuage yesterday’s grinch’d and gritty skepticism and bile at the sight of the cash cows and glamour hogs with they double-entry bookkeeping journals out . . . Out of Franck André Jamme’s New Exercises (Wave Books, 2009), translated by Charles Borkhuis:I respond to that the way I picture Ezra Pound at St. Elizabeths communing deeply with a Chinese character, pulling the various ideogrammatic particulars (man, tree, fire) out in order to suss out a synthesis, registering progress with a satisfying asemantical grunt. I like how slow it makes the world. I like the waiting, the revel of delay reveal’d. (A lovely line of apparent instruction, laconic, prefaces the selection: “Not too fast.”) Here’s another:And who’s got that line I love, that Lethe-cover’d line—André Breton or Frank O’Hara: “Tu as un œil qui dit zut a l’autre”? Isn’t that one of the figures crooning here behind the mesh (in plain sight)? What Jamme says of the source of the impulse, the method:

Tablets like these used to be found on small gold leaves in ancient Roman graves. These leaves were typically folded inside the closed hands or mouths of the dead. They could be read as maxims, wishes, recommendations, or favorite sentences probably meant to seal the crossing over to the other side, that totally unknown country whose existence itself is so uncertain—the country of “the most numerous,” as the Romans called it.
In the following pages, there is no message for or towards the beyond; instead, just a pet hobby that materialized without warning then developed, like a fire, until it became a book. A game played with thoughts that are neither funny nor playful; a “game” in that it was amusing to watch as these thoughts drew steles, and amusing again to spend time, days later, trying to decipher them. To distract myself for once with letters and words, and to abandon, for a time, the customary, linear way of reading. To obscure it in order to suddenly render attention necessary; not only attention, but even a kind of effort.
No fascination here either for any formal perfection. In the tradition I draw from, any tablet may be considered “perfect” as soon as it has as many signs in its last line as in each previous line. My tablets, as you’ll see, are rarely so lucky; they usually just end when they can, where they fall: an arrangement—of signs, of lines—that has never subsumed their meaning.

Marvelous, the infinitives bury’d in the note, waiting to be arranged:Too, there’s a terrific spillover of Jamme’s remarks to the back cover of New Exercises. I only recall seeing such a sign of excess (sign of the “imperfect”—an arrangement whose meaning remains “unsubsumed”) in Gerry Gilbert’s Moby Jane (its initial piece—“Sounding,” with the “taunt, considering” initial line reading “poets all begin in the same place”—begins directly on the front cover and its final “Zig Zag Blues” is found back cover verso). Jamme, in a lovely requiescat spill’d out (with solemn restraint):

Now that the time has passed and this book is almost printed, I realize when it was that these writings became a kind of antidote to lost seasons. Salvation, one could say, through play. Long before I’d even considered publishing them in book form, I spent a lot of time playing around, drawing these tablets on pieces of gold foil I found in packs of cigarettes or around chocolate bars, as if to offer them—I have no idea how—to the hands and mouths of the dead who’ve begun to surround me. I then began to inscribe them on mirrors, so that the simple reading of letters and words would instantly obscure any faces, starting with my own.

Something terribly forthright and modest—trustworthy—there: it reminds me of Sebald a little. Deux encore:And:“Lethe’s other laugh” lodged like a lozenge under the tongues of the dead. 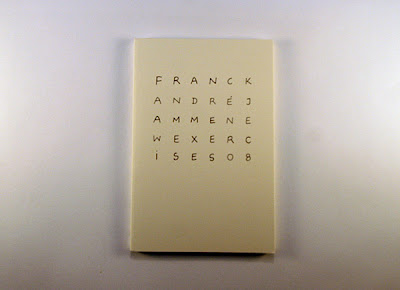