A Wall with a Hook and Two Tacks

CCLXVI
In tender arms sweetlie I
my mnemonic duchy with watry
ware, no rosie horses moue
without, wyfhood is no comparisoun.
The cankers of the memory-
venom’d surround, the hid cutworms
who lop off the weedy
surfeit flush, fleshly night-rapiers.
The world is set against
any comprehension of it, we
stick sticks in its grease-
kecky gears and still it
keeps its ostent fitching. Of
course there’s money to be
made in procedural detachment, there’s
a story to mop up
off such indubitably epicurean voluptuousness—
though chances of its making
it beyond the outré circle
of miscues, typos, and Henny
Youngman ‘fans’ is zilch. Every
crime is a work of
art uncommitted to the canvas,
some anodyne tin-work’d Athena
emerging out of my slit
brow, the color of silt,
the color of cash. Tenderlie
my pudeur out of whose
thicke and queachie plot like
a Mayfly hatch’d I flye.

And then one rank morning, biking in the pitch, it all begins to seem a foul goatish gabble, like that of the laborers of Babel, and only a life without speaking’d allow one’s breath and blood to mingle. All that proceeding with fatal mordancy and flourish, all that brain-palsy and vertigo, all that beleaguer’d assurance and marauder’s post-subliminal fistful of heart’s-ease, all of it, over words! They are everywhere! The lingual surge, a kind of violence “that blows all Summer, and often in Winter: it sows itself.” Journeying through the psyche’s pitch with what wan blazes slash’d into trees cover’d with other, sap-befoul’d blazes, scorn’d scars, vicious blackguard trees all along the rutted path: “But words came halting forth, wanting Invention’s stay.” What if Blake—

Swelld & bloated General Forms, repugnant to the Divine-
Humanity, who is the Only General and Universal Form
To which all Lineaments tend & seek with love & sympathy
All broad & general principles belong to benevolence
Who protects minute particulars, every one in their own identity”

—meant words? Words that mash the “minute particulars” to an impalpable moot-smeariness, a phenomenal sludge? Blake of the inimical tactility, Blake / Nebuchadnezzar who snouts along the wordless earth, “crawling on his belly, naked covered with hair & nails grown long, eating grass,” Blake of fingers taut and shining forth light in the figure of a caliper:

Ah, the limit-purchase we all cling to, fingers bent to the sooty ledge, yellow’d honk-metaphysical noises of the taxis streaming below. It is not McLuhan who is powering “up” my discomfort, though I did swamp about in the ever-remarkable Gutenberg Galaxy yesterday, and somewhat sleeplessly (“Je ne dors pas Georgia / Je lance des flèches dans la nuit Georgia” comme dirait Philippe Soupault) noted how Ruskin provided a gappy constellatory collage method: “A fine grotesque is the expression, in a moment, by a series of symbols thrown together in a bold and fearless connection, of truths which it would have taken a long time to express in any verbal way, and of which the connection is left for the beholder to work out for himself; the gaps, left or overleaped by the haste of the imagination, forming the grotesque character.” Which sounds a little like playing Jacks, thrown down and scoop’d up in manageable “sets” (“work’d out for oneself”—“ Ip dip, sky blue. / Who’s it? Not you.”). “Not you” nothing-doing: isn’t one to say that, post-Ruskin, Nous sommes tous les grotesques? (I am remind’d, too, pondering Ruskin’s “symbols thrown together” somehow side-stepping “any verbal way,” of that Fitterman and Place claim in Notes on Conceptualisms: “All conceptual writing is allegorical writing.”

Ah (all-purpose noise situating itself between contempt, admiration and a variable third quality, something like piteous skepticism for us all), Conceptualisms. Out of Blake’s worrying the human sensibility, the limit’d and clumsy tools, make it a plaintive query—“Who protects minute particulars?”—we descend to boss-hallucinogenic props for “failure”:

Note: these are strategies of failure.

Note: failure in this sense acts as an assassination of mastery.

Note: failure in this sense serves to irrupt the work, violating it from within.

Note: this invites the reader to redress failure, hallucinate repair.

Which is rather like tantrum-heaving the Jacks across the room. (Or controlledly “throwing” the Jacks down in a perfectly retrievable clump.) “We” no longer need reply to anything in our human condition beyond production and consumption (“the easy consumption / generation of text”), the undignify’d machine world’s won, we capitulate (subsumed by the capitulum, the chapter’s title, the capo, caput, L. head; we and all our “minute particulars” are kaputt, G. finish’d). I am going to sit quietly now naked in the garden with the good craftsman and printer William Blake and wife Catherine, she who help’d sell vegetables in Battersea, and sign’d her marriage certificate with an “X.” 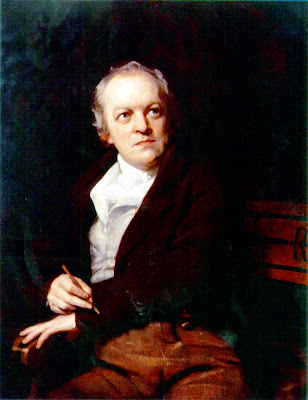 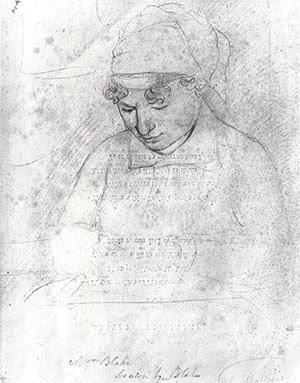