CCLIV
Because I so wholly doubt lingo’s sufficiency, though my grievous
need is such that I cannot
Think of ending my attempts to make it do something
beyond its moot-customary inspecific
And wisenheimer tongue-waggery, its minor smooches and slithers—and because
its constant enjambment is “modern life” with all
Its ongoing fervency and furbelow, its way of dripping off the marquee
To dirty one’s sagging shoulders, or blowing up out of the uncover’d man-
hole that’s cordon’d off with orange tape
For eventual repair—and because meaning inevitably latches itself to one’s foot
like a newspaper dash’d there by a wind unregaled,
No foehn (Iggy Pop), no sirocco, no chinook: I spout off, I mug, I sniff,
I titrate it out into a standard reagent.

I swear I read a line about ownership of the present, the avoidance of, which
made the ex-
Stoner in me sit up, something difficult to do if one is accustom’d to standing
around yakking about gumption,
Proprietary rights or no. I can’t find it now.
Or if one’s used to the wakka wakka of Fela Kuti, one way
into the inevitable
Consumption of Africa by the West: “Whose face between her forks
presages snow . . .”
Meaning every heat-seeking lingual deployable stints at
delivery, implacable, untrue,
And afflict’d with a bright reticular kind of cold, blanketing.
I can’t say it now. I can’t say a thing right now.

Donald Davie says, “Circumlocution is vicious when it is merely prolix,” a thing direct enough to tug the bit of any galloping horse thief. And he quotes William Cowper’s:

Nor envies he aught more their idle sport,
Who pant with application misapplied
To trivial toys, and pushing ivory balls
Across a velvet level, feel a joy
Akin to rapture, when the bauble finds
Its destined goal of difficult access.

Only to add the smarting, “We can echo Mr. Eliot and say of this that what the poet has to say appears surprised at the way in which he chooses to say it.” Though, frankly, I rather like “application misapplied” and, moreso, “velvet level” (I’d admit that “destined goal of difficult access” is entirely and schoolmarmishly prim). And what if one argue’d that, in context, the lines enact the lackluster pastime of gamesmanship (prim billiardry, here) to “a mind well strung and tuned / To contemplation.” Here, the preceding lines:

Who then, that has a mind well strung and tuned
To contemplation, and within his reach
A scene so friendly to his favourite task,
Would waste attention at the chequer’d board,
His host of wooden warriors to and fro
Marching and countermarching, with an eye
As fix’d as marble, with a forehead ridged
And furrow’d into storms, and with a hand
Trembling, as if eternity were hung
In balance on his conduct of a pin?

Why am I talking about Cowper? I admit it: every strike against magniloquence and verbosity—making of language a toy—pops me in the solar plexus. Note how James Longenbach in a Nation review of the new Wallace Stevens Selected Poems repeatedly relates Stevens’s achievement to some kind of pared-down “lessness.” He notes the “poems whose plain-spoken diction feels spooky.” He claims that “the consolation of ‘The River of Rivers in Connecticut’ feels enticingly complex because the poem’s diction is so eerily generalized, its syntax so quietly declarative,” and insists that it “would not feel convincing if its tone did not make small means feel magical.” He uses the near-oxymoronic phrase “incandescent plainness” for Stevens’s most distinguish’d work, claiming it is “austerity that more truly becomes him.” (The piece is call’d “The Music of Austerity.”) “The imagined” (what Stevens counters “the real” with) is conveniently toss’d off, dismiss’d as a kind of child-petulant indulgence: “Sometimes he is a poet of extravagant verbal energy, a show-off who indulges in lines like ‘Chieftain Iffucan of Azcan in caftan / Of tan with henna hackles, halt!’” Longenbach’s will’d argument (and, apparently, that of the Selected Poems itself—see, “The whole of Stevens is represented here—the plain, the fancy, the philosophical—but the latter two categories have been pruned, affording the best of Stevens more prominence”) is one that corrals Stevens as forerunner to a particular kind of plain-speech “realism” that keeps American poetry tame and provincial. (He musters a lineage that includes, mon Dieu, mon cul—the sappy complainer Louise Glück!) 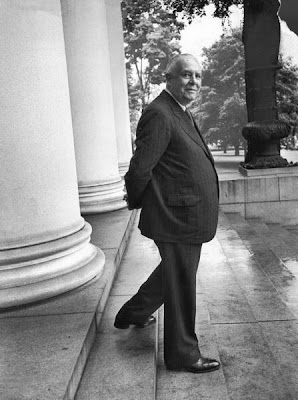 Wallace Stevens Standing on the Steps of the Hartford Accident and Indemnity Co., 1950
(Photograph by Walter Sanders)

Out of Keith Waldrop’s Transcendental Studies: A Trilogy (University of California Press, 2009):

An interesting case, the progress of a bird. When
they move, they move quickly, a glittering
line. One’s own performance can alter.

As a mere form or fold of the atmosphere, were
our organs sharp enough. I am, as
if I were not. Tendency to telescope.

A thought vanishes and there, before
sunset, someone else is thinking it. A note in
music, as the ordinary accompaniment.

But again, I have this encouragement,
not to think all these things utterly
impossible. Purchase new clothes, buy food.

Desperate attempt to escape perplexity. On the
surface too deeply absorbed to conceal
her ignorance. A cowboy leaves the ranch.

Four distinct things are to be borne in
mind: the square, a small body, free
air, the intensity. Went to town.

Mad. Foolish. The sound of an
explosion is propagated as a wave. Nobody
knows him, he’s so dressed up.

Stamp on the air the conditions of
motion. Sing a hymn in the passage, but
sing so badly. Haunting tune, idea, phrase.

The dog barks at him when he comes out. He
sells the cow, shops for a wife, builds
a new barn, buys cows. The rest I’m forgetting.

Is it simply by dint of thinking about Stevens that Waldrop here seems Stevensesque (the “plain” Stevens)? I am recalling Waldrop’s excellent (and, what, jauntier?) The Real Subject: Queries and Conjectures of Jacob Delafon with Sample Poems (Omnidawn, 2004), and trying to avoid seeing a duality at work (though I note, in the latter book: “Jacob Delafon reads, somewhere, that all human activity lies along two opposing vectors: the centrifugal push of paranoia and the centripetal pull of hysteria.”) And Waldrop’s “Tendency to telescope. // A thought vanishes and there, before / sunset, someone else is thinking it” certainly lends credence to a cosmic push and pull—the contracting and expanding that drives the giant dynamos lodged in the tiniest brainbox, no? I find the pieces in Transcendental Studies hard: meaning seemingly construct’d of discrete and fitting stones (with the kind of inevitability of placing and minimal cement good masonry exhibits), meaning durable, capable of bearing up under examination. Here’s another:

The broken stone with its
bedding, rammed down hard.

Bring on your gangs, wooden
beetles, a solid
mass when the beating is finished.

On top, sift powdered
marble and lay on
lime and sand.

“Beetle, n.: An implement consisting of a heavy weight or ‘head,’ usually of wood, with a handle or stock, used for driving wedges or pegs, ramming down paving stones, &c.” 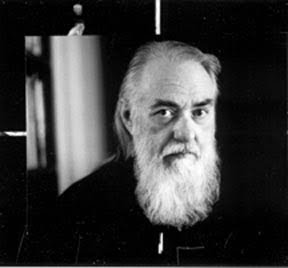