CCLXVIII
Painterly doodads
run amok,
impasto’d coils
squeezed out
excrementally taper’d,
a filigree
of turds
marshall’d forth—
the material
world resinous
and gummy.
Mock-longing
to make
a useless
replica of
the little
shits with
words, how’ja
know? Put
commonality’s affable
pal transparency
to rout
is what
I am
“at.” It’s
a vulgar
error saying
so, like
the way
Natty Bumppo
sounds like
a Negro
cook, or
a fly
-sized hlæfdig
caught between
the orbs
of earth
and sweet
verminous heaven.
The word—
any word—
tax, mucker,
kidney, finch—
’s trapped
by scrims
of red
semiotic juice,
meaning intercepts
it, sucks
it off,
depositing nothing
seeable: clarity’s
monstrous husk.

Skinnying down with an itch. O my spotty reading, crush’d by night!

Out of the fourth issue of Peaches and Bats, edit’d in Portland, Oregon “by Sam Lohmann for ‘The Firm and Aerie’”—it runs the subtitle, “a twice-yearly magazine of poetry and teasing”—a chunk of David Shapiro talking to Lohmann about Joseph Ceravolo, a “cubist youth”—and, uh, “everything”:

I think Joe and I were more like pals, copains, than teachers and students with each other. I found him depressed and anxious about work and family, when I had little interest in work and family, being 15. But I also found him endlessly strange, as if he were inside his own eclipse. I loved that purity in him, and those wide expanses between letters and words: “Oak oak.” I felt annoyed when his friends treated him as a saint and me as a Jewish intellectual tramp. What helped us all was the other glue of our friend Frank Lima, who completes a strange trio of us. Lima had all the Catholic twists that came like my Jewish-Russian background. We were all slightly inebriated with the idea of language, but Lima and I were also confessional and angry, and Joe was purist and a kind of St. Francis of poetry: “I want to give my food to a stranger / I want to be taken / I am thinking about my friend.” I think Joe found it hard to deal with my “mixed” poems. He kept to a single great tone of grey-blue, a conceptual grey-blue as in Cézanne (Rubin’s insight here). The struggle in all of us was how to wreck narrative, unburden our lines from mere confession, strike through syntax, uncouple grammar and coherence, and end up however with an effect as powerful as Moore, H.D., Pound or Reverdy or Apollinaire. Ted Berrigan sometimes seemed to me to lack the pluralism of understanding us all three. But it was a difficulty to dogmatists, and even pluralists can be dogmatically monist about their pluralism. Ted loved Joe, and so did I, but I saw in Joe an endless discipline of engineering poetry, as in his “day job.” Joe also had no pretense except the highest. It is hard to imagine this homo religiosus not being friends with everyone and everything. He and Frank loved each other despite enormous differentia. I loved his long poems and his ambition for the tiny world of bugs and lyrics. We need more complete works of Lima, Ceravolo. A lot of literary history is simply false because of some expungings or what Silliman has called disappearances. Lima and Ceravolo, “precious pair of poets, genius in both, but what is genius?” It would take a long essay to build up a sense of the sociology of those moments. I did find it amusing that Ron Silliman picked up or was picked up hitchhiking by David Melnick, and I had spent all of a summer 1967 preaching to David about Ashbery and Roussel. David told Ron evidently that I was his favorite poet with Ashbery, but Silliman never mentioned this till very recently. A lot of the techniques of the “Language” group, I must say, came from this contagion with another set of poets. When I met Melnick, he was reading Sartre every day like a worshipper. After our months-long conversation, David was writing false translations as I told him to, triply acoherent rounds and much else out of Roussel and even myself. And so we find a great link in which I turn out to be a comrade or paternal, as I often think, toward the Language school. And I am about to say my most arrogant comment: I have never seen anything since my cubist youth that was to me technically amazing or new. Clark Coolidge I was anthologizing in extremis in my NY School [An Anthology of New York Poets edited by Shapiro and Ron Padgett] and also Bernadette Mayer. What in these seemed pre-linguistic? Ceravolo’s long acoherent odes—what has gone beyond them in formal shattering and vividness of simple shifters? Dubito, dubito. And yet all poets compete and don’t compete, the “more angels the more room.” But in art, none can hardly claim to have done something new in drips, if they looked done by Pollock in 1947, a snowy day in which I was born at the moment of the first all-over. Let me say that I often find critics and academics who haven’t read Dick Gallup in C Magazine—a long poem called “Life in Darkness” that would be accepted as a poem written tomorrow by 99 percent of those thinking of themselves as innovators. Yes, this saddens, angers me. But Ron Padgett says wisely also: “We are lucky to be writing and getting our work out at all.” But the thick lived life of poetry is sometimes expunged by false canons. I really have this as ressentiments, a lover’s quarrel with poets. Or a loveless quarrel with critics. Now let’s say something cheerful, like: “I breathe slowly and I rarely dance.”—Satie! The author of the endless Vexations knew how to be humble in a bar of pianists and poets. 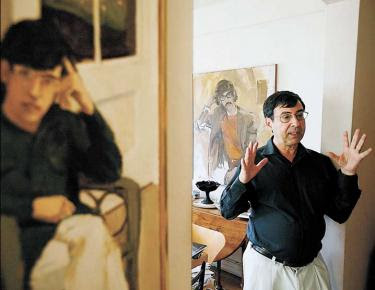 An alignment. Out of Artists’ Sessions at Studio 35 (1950), edited by Robert Goodnough (Soberscove Press / Wittenborn Art Books, 2009), Robert Motherwell’s reply to a query by Hans Hofmann, “What is abstract art in the ‘good’ sense?”:

Age came not my conifer, O
Not my corall on the prairie
The Navy, some Noel port,
In Voguelion collars.
Vase knee lop, Unguented an’
Interred d’old tram are:
O Me! Lassoo dolent enter,
Come! O dig! So far!

A vase in Altrac, on the rate,
A knoll, remember? A deer:
For image knowing Anne, a tacked on
Tan—Tison, Lisos—Fire?
Chum, if Anne — O gran! Goo! er
La notte, cold a day;
Nascent elan dint, er
Not my parch so see a

The crock salve agent,
’Em face dis weird:
The crock miff adolant,
No me well din opperage are—
O crock pall leg rind,
Perch me high if it is true!
O my lasso, Tapina!
Key or dough, send in the nut.

Lo! Radar Imp Compass
The nut is Monad Man-Teen,
His a mug er rat-face,
Come a tole, Tamia, spin,
Oil, the pot est ate
The mute had otta ate,
Loam, idolize me more!
Vizor are comin’, ain’t ’at a!

Splendidly niggling an absent narrative, pulling the leg of lingual purity, the piece sounds rather homophonically translated in part, though incompletely. It’s undated, though Gallup places it in Shiny Pencils a couple poems prior to the C-print’d “Life in Darkness.” “The thick lived life of poetry is sometimes expunged by false canons”—it is there Shapiro’s brilliance hits home. It is particularly so in an “era” of manifestly careerist and doggedly self-serving constructors of those canons, weight’d histories silently occluding, the never humble in the bar of the grand pianists and poets. 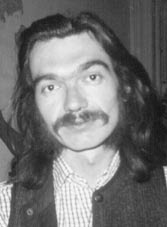