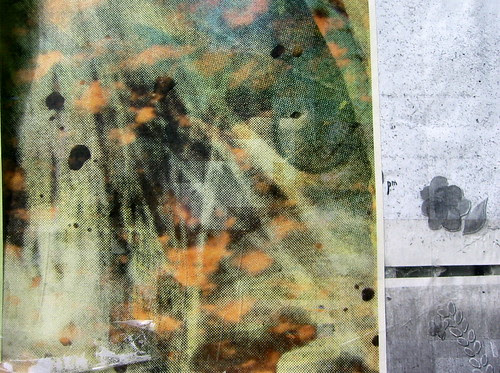 CCLII
Unhors’d, a galloping rain slews through, teeth-specious and unsaddled,
pulls up lathery and spur-
Nick’d at termini. Sluices the gutters ‘like to a bowle of creame
uncrudded.’ My job’s
To go slop the pigs, is Caedmon’s pretext against the strain of getting
Hammer’d with the monks and being ask’d repeatedly to sing, dammit.
Some vestigial
Northumbrian morosity’s dump’d the laggard in the filthy sty itself,
whence sleep provides a nigh-
Heavenly roof and, unleash’d like the rain, a previously parsimonious
little door slides open.
Caedmon, Bede says, thence sang a fury, scop-bewilder’d, indubitably
a slut of the Almighty.

Dub-rot noises and teeming strands of undoing in the horse latitudes:
any unlimit’d stoppage accumulates
A muddle of terms. Severe white divulg’d under urine-hint of
grub white, cloud-continuity by
Pentimento. Constancy’s a thing to contend with, fractious as the burgo-
meister’s girl,
A scrumptious peach who longs to go to Carthage, or Köln, and curses
The restraining order that makes of any perceived breach so dismal
an aftermath. All is hardly copacetic
Today at the Copacabana. The cloudbank rolls up its metal
grating and pushes a broom
Out the door. The man behind it is singing, something about how song
ought suffer no fix unpitch’d nor fix’d pitch.

One that required a fury of niggling and cuss’d nonchalance to get “beyond.” Maybe the cheese in my head is going soft, or south.

Out of Tom Raworth’s Earn Your Milk: Collected Prose (Salt, 2009), a part of a letter by Raworth’s father:

There seems to have been a poetry explosion, and the resulting poeticized particles are too small for me to handle mentally with any satisfaction. Sometimes I seem to hover on the edge of a meaning to these minutiae of sensibility, but finally it eludes me. Perhaps it is a private world that I am not supposed to enter. A pity, because beauty does not lose by being shared. I hope you will not think of us as James Joyce thought of his aunt. He sent her a copy of Ulysses, and waited for her comments. Apparently nothing was forthcoming. So he wrote to her, and I quote: “There is a difference between a present of a pound of chops and a present of a book like Ulysses. You can acknowledge receipt of the present of a pound of chops by simply nodding gracefully, supposing, that is, that you have your mouth full of as much of the chops as it will conveniently hold: but you cannot do so with a large book on account of the difficult of fitting it into the mouth.”

And, later, with Raworth’s explanatory parenthetical:

I enclose a bit Old England—mind it doesn’t disintegrate on exposure to American Air. (Enclosed was a newspaper clipping of a photograph of an old man in a top hat and knitted scarf, leaning on a stick. The caption read: ‘Robert Morvinson, carrier and shoemaker of Stallingborough, Lincolnshire, photographed in 1857, aged 82. This is one of 159 photographs in “A Country Camera, 1844-1914” by Gordon Winter (David and Charles £2.24). Morvinson, was born in 1775 when Bonnie Prince Charlie was still alive.’) Living with such a collection of characters must have been a perpetual feast. Carlyle used to order a box of long clay pipes from Paisley and smoke a new one every day, putting the old one on the doorstep, before he went to bed, to be taken by who would. 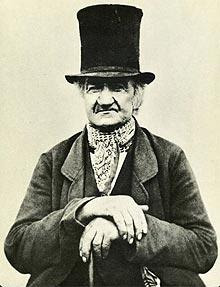 The letter is tuck’d into a series of letters Raworth wrote to Ed Dorn—a piece call’d “Letters from Yaddo”—letters typed out and mail’d off daily (“That way I won’t have a copy to read with hindsight”). Moved by something like, oh, the authenticity of the flailing (and the heights it, puttering, hits):

Adrift and alone for two days now inside my head with no shore on which to land. Speed pushes mind around in time until the scabs break off and the raw meat of thought flinches. . . . I saw the Pacific again for the first time as I ran down the beach drunk, at one in the morning, away from the lights and toward the sound of the waves. Ran straight into the sea so that for days I could taste salt and my jeans shrank and stiffened and had to be thrown away.

as light has speed we are always

I wandered around the grounds and the buildings, writing the end with a stick in snow banks. Then I went into the house, and in a nest of drawers found a stereoscope and hundreds of pictures. I spent two hours staring into those worlds, picking the sepia pictures at random. Going from “10802—Snow-Crowned Popocatapetl and Ixtaccahuatl Guarding Cathedral, Puebla, Mexico.” (Keystone View Company, Manufacturers and Publishers, Meadville, Pa., St. Louis, Mo. Copyright 1900 by B. T. Bingley), through “13319—The Flower of Venezuela’s Regular Army” and “11064—Killing The Fatted Calf, Palestine,” to Cuban Lovers—Courting Through The Barred Windows” (Underwood and Underwood, Publishers. New York, London, Toronto-Canada, Ottawa-Kansas. Works and Studios—Arlington, N.J., Littleton, N.H., Washington, D.C. Trade Mark sunsculpture). . . .

No. It’s still a day for drifting—but in a submarine through the many-coloured swirling oils. If it’s done with truth and love and no wish to profit, in any sense, then it will take shape. The final thing I find in any art that moves me is the clear message ‘there is no competition because I am myself and through that the whole’. 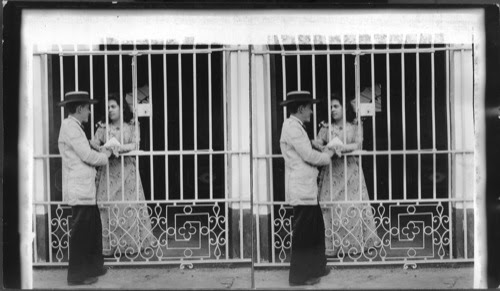 Cuban Lovers—Courting Through The Barred Windows 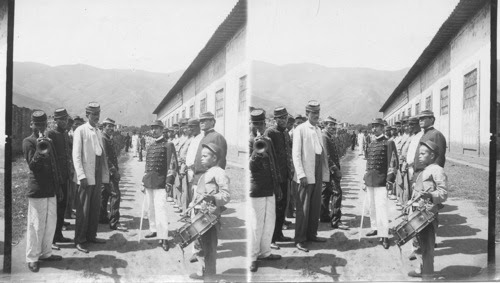 The Flower of Venezuela’s Regular Army

If Raworth later exhibits doubt—“that last part is too maudlin”—nevertheless, he sees with a precision nearly lost in these rabid days of the plenty-careerist century:

. . . he knows as he writes that the whole point is that there are no rewards. The pain, the depression, the loneliness are the flesh of the oyster: that what poets taste like. And the relief is when a fleck of sand enters and the layers of pearl start building, taking your attention away from your self. There is no feedback from where we are . . . nothing ahead that can throw back an echo. We sit in silence waiting for the faintest sounds, which are the fragments of the name of god. And when they rise, we follow wherever they lead. As last night I followed them into the library, pulled down Maritain’s Creative Intuition in Art and Poetry (and when else would I even look at a book like that?), opened it at random, and started reading a poem of Hart Crane’s:—

Yes, I being
the terrible puppet of my dreams, shall
lavish this on you—

God-lit maudlinesque (the “fragments of the name of god” sweep one back to Raworth senior’s “poeticized particles”) alighting where it must: on the dumpy Thomist back of Jacques Maritain (with a little chagrin and self-guffawing), there to find the innocenti Hart Crane. It’s a marvelous openness lash’d firmly to complete integrity that Raworth exhibits here, a receptor human, too human, hardly blind to either the preening and vanity that defines the writerly cohort, or the ways that snout in the door works.

The point must lie where ‘like’ slides into ‘is’. I found the epigraph for this book late last night in Trelawny’sRecollections of the Last Days of Shelley and Byron:—

Infidel, jacobin, leveller: nothing can stop this spread of blasphemy but the stake and the faggot; the world is retrograding into accursed heathenism and universal anarchy!

Yes, the wheel turns full circle: but the flaw in the rim touches the ground each time in a different place. And for ten years all I have done has been an adolescent’s game, like the bright feathers some male birds grow during the mating season. I look at the poems and they make a museum of fragments of truth. And they smell of vanity, like the hunter’s trophies on the wall (‘I shot that poem in ’64, in Paris’). I have never reached the true centre, where art is pure politics.

Dieu merci for that. 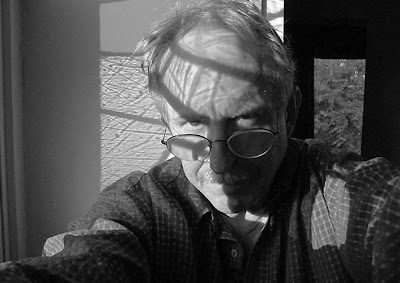