58
“Somebody yell’d ‘The tide’s going out!’ so we went running along the muddy red inlet looking for things strand’d by the chance vacancy of water draining out. A leathery-looking duck, a long-neck paint’d turtle, a big black frog splash’d with fiery oranges and yellows. Down under the newly-construct’d bridge where the dredgers work’d, two horses clash’d wildly, hooves flailing, one down’d and the other falling into red-wash’d shallows, a terrific splash and brute congress with piercingly sharp whinny-noise and no footing. A backhoe loader, sun-yellow, gingerly manoeuvre’d its scoop under one of the horses and lift’d it out of reach. Through woods violently green we careen’d in a pickup, plunging down hills after hill into muddy red dirt cuts and washouts. Through sweet gums and tulip poplars, serviceberry and choke vines the size of a bicep. Inside a burlap-wall’d shack, compleatly flour-drench’d, John Cage’d concoct’d a tremendous variety of dumplings. Fritters, beignets, pączki, Berliners, garakjibbang, bear paws, zooloobiya, gravy rings. Some complicated translingual joke went around about a recipe ingredient and a man who look’d like “late Stevens” report’d that a cup of that’d end anybody’s day ‘for sure.’”

Nosing around in the newish Joel Bettridge and Eric Murphy Selinger-edited Ronald Johnson: Life and Works (National Poetry Foundation, 2008), essential for Peter O’Leary’s memoir “Gilding the Buddha: My Apprenticeship with Ronald Johnson” if for nothing else—and there is, happily, much “else”—Mark Scroggins, Andre Furlani, Logan Esdale, Rachel Blau DuPlessis, Graham Foust, Devin Johnston, the 1974 Vort interview with Barry Alpert (somebody ought to reprint that whole Vort series, no?) amongst it. What caught my attention—Guy Davenport’s pertinent assessment of Johnson’s “eye” (written originally for an introduction to the 1969 Norton volume Valley of the Many-Colored Grasses):

Much that is new and rich in Ronald Johnson’s poetry can be traced to his having seen the contents of his poems with his own eyes, out of his own curiosity. This charming doggedness, which Mr. Johnson shares with our best poets writing today, may have saved American poetry from a dismal return to the academic slush into which it is constantly threatening to sink.

And isn’t that “slush” un peu partout of late, and evidenced in all the various (or not so various) “schools”? Isn’t one danger particular to the lament’d disposal (oh dustbin of history) of the “lyric I” a failure to note that it is itself the primary vehicle for the essential seeing “eye”? How much of the contemporary verbiage (and not “just” the mechanical contructivist groupuscules) reads as if the writer did not ever pause long enough to look at anything? A nation a-tumble with mal vu mal dit attempt’d coruscations of the incurious? A kind of poetickal “Big Stickism,” jumping violently in without seeing. “Because Theodore Roosevelt’s eyesight was so poor, he never became adept with the lasso.” 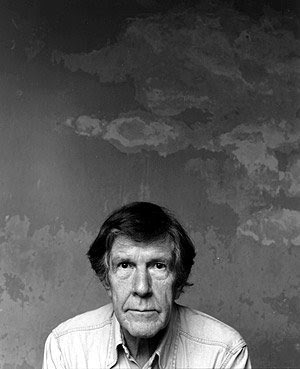